In this opinion piece, Frontier Pets Founder Diana Scott discusses new proposed animal rights laws in ACT. She also poses the question: according to humans, are all animals created equal? 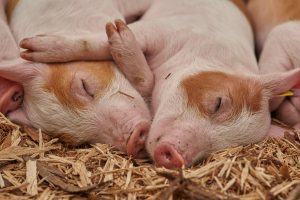 In an Australian first, the Pet Industry of Australia recently announced that Canberra may recognise animals as sentient beings. A “sentient being” is a creature that can suffer and feel pain – mostly animals and humans.  It extends to a being with the faculty of sensation and the power to perceive, reason and think. It’s a bit of a no-brainer for us humans – we definitely feel pain and (most of us) have the power to reason and to make every effort to avoid pain! As such, we tend to treat all people as equal – knowing that everyone feels the same.

With animals, it’s not so easy.  Not because they’re not sentient beings, but because of the way we treat them.

Should a stock cow receive different treatment to a companion animal? Should we ignore the rights of a fish because it’s swimming in a “responsibly sourced” enclosure?   Or a pig in a sow stall somewhere in the back of beyond?

What do these new laws entail?

Responsible Pet Owners are rejoicing in the new would-be ACT laws, which includes:

Under the proposed laws, the ACT would become the first jurisdiction in the country to recognise the idea that animals are able to feel and perceive the world. Having said that, it would appear that not all animals are created equal.

would this law really ensure that we treat all animals as equal?

A veterinarian commenting on the new laws said it was important to clearly define which animals we recognise as sentient, saying that classifying large animals – like cows – as being such would get in the way of the economy.

He went on to say that farmers spend money on the animal if it gets them more money.  It’s apparently a profit thing – not based on sentimental value, but on economic value.

At Frontier Pet’s we believe that all animals are created equal. If the definition of sentient is that an animal can feel fear and can reason, then a cow is just as sentient as the family pet.

Daniel Weary, an applied animal biologist at the University of British Columbia, has made a study of cows and found that calves are affected by the emotional pain of separation from their mother and the physical pain of dehorning.  He found that both types of pain can result in a negative cognitive bias similar to pessimism.

Pigs are intelligent, emotional and complex animals who can actually solve problems and have individual personalities. Indeed, experts widely consider them to be more intelligent than dogs.  Yet we keep them in cages while they grow fat enough to eat.

There is also a common misconception that fish do not feel pain. As a result, we give little or no attention to their suffering, despite the fact that most are fully conscious during slaughter, which can take many minutes. In fact, fishers often kill them by bleeding them out, hitting them repeatedly, or suffocating or freezing them.

Now, could you imagine doing that to your furbaby?

How can we balance kindness with pragmatism?

We recognise that our society breeds farm animals for food. We also recognise that there is no need for them to suffer and live a life of misery before and during slaughter. As Philip Lymbery, author and CEO of Compassion in World Farming so eloquently says:

“Our pets would be shocked to learn that their food has been created from the misery of another beautiful sentient being.”

Our friends at Frontier Pets really want you to try their food, so they’ve put together an exclusive offer, for Mad Paws customers only. You’ll get a 5% discount off your total order from now until the mid-July, 2019.  To order go to:  frontierpets.com.au. When you check out, enter the code MADPAWS and they will automatically apply your discount.

How to Install a Dog Proof Fence