Australia’s Dog Of The Year 2017 WINNER!

We had thousands of entries and considered each and every one! We wish everyone could have been a winner but eventually our panel had to choose! Meet our state finalists and the overall Australia’s Dog of the Year! 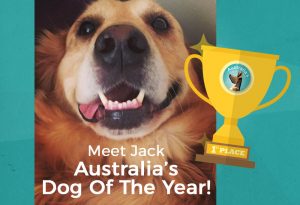 Jack is officially Australia’s Dog of the Year! The adorable 8 year old Golden Retriever x Labrador is forever in his family’s good books when he literally saved their lives recently. Jack’s typical nighttime routine was to go outside for 20 minutes before coming back in to sleep inside with his family. On one particular evening, both of his owners, Laura and Scott were ill; Laura was already deeply asleep in bed when equally sick Scott let Jack out for the last time. While he waited for Jack to do his thing, Scott lay down on the bed and unintentionally and immediately fell into a deep sleep. Some time later, both Laura and Scott were woken up by Jack making strange noises- Laura said “it wasn’t like any noise I’d ever heard him make before. He was running around outside back and forth between our bedroom and the back door, making a really strange noise”. It was only when Scott got up and opened the bedroom door that he saw that the house was on fire only 2 metres from the bedroom door where they had been sleeping.  If Jack hadn’t woken them up, Laura and Scott would have been trapped in their bedroom very quickly. Thanks to Jack, the family were able to get out without injury and the damage to their home was minimised. Jack, there’s no doubt in our minds that you are Australia’s Dog of the Year!

Human Food Your Dog Can Eat

Can You Tell Which Breed These Puppies Are?

What a great story! Jack is a true Australian hero!

Bodhi wins my personal award for fashionista of the year with the flower hat! 🙂