In this Dog Breed Corner, we take a look at the dog who inspired Snoopy: the mighty Beagle. Check out the Beagle’s origins, personality, trainability, living needs, and more! Do you have a Beagle who would benefit from the pawfect meal plan? Sign them up to Mad Paws Dinner Bowl for the best dog food around! 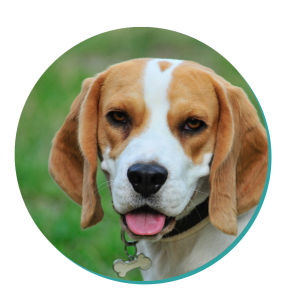 Due to their popularity as a pet, cartoon character, and sniffer dog, the Beagle is a fixture around the world. But, how did they gain their global pup-ularity? Let’s sniff out the origins of this famous pooch!

The true origins for this dog breed are unknown, but it’s likely that the Beagle and many similar hounds have existed in England, Scotland and Ireland for hundreds of years. In fact, records suggest that Beagle-like dogs existed all across Europe – dating as far back as 400 B.C. Greece. Throughout their long history, they’ve been revered for their powerful noses, which help hunters track foxes, rabbits, deer, and any other prey animal available.

The name Beagle may come from the Gaelic word for small, or “beag,” and it was this dog’s compact stature that set them apart from other hounds. Unlike larger hunting dogs whose size required their handlers to follow them on horseback, Beagles were small enough for on-foot hunting expeditions. This made them popular with everyone from wealthy landowners to average folks who couldn’t afford horses. With that powerful sniffer, these dogs were sure to be successful, no matter if the hunter had one faithful Beagle or a whole pack.

Over time, the Beagle would phase out of the world of hunting. In fact, with most countries banning the sport by the 20th century, the Beagle turned towards other endeavours such as contraband detection for law enforcement.

When cartoonist Charles Schulz drew up the iconic Beagle, Snoopy, in 1950, the world fell in love with the dog breed once again. Even NASA saw Snoopy’s appeal! They made him an official mascot as a way to drum up public support for their space missions.

Today, you’re most likely to find Beagles in family homes instead of space programs and hunting fields. While they’re adventurous little pups, they do seem to enjoy a domestic existence!

Combine the playful energy of a puppy with the laser-focused inquisitiveness of a hound, and you have yourself a Beagle. In the spirit of full disclosure, it’s only fair to say that the Beagle has a personality that takes some getting used to. However, once you get to know their quirks, this floppy-eared darling will bring you a world of joy.

Before we delve into their more charming traits, let’s begin with the cons. Beagles are, and we mean this with all respect in the world, stubborn. They were bred to be one-track minded, which makes them excellent trackers but a bit frustrating in a family setting.

And, while they certainly adore their Owners, these little guys are boundary-testers. If not watched carefully, they can find all kinds of ways to make mischief.

Finally, their greatest asset can also be their greatest curse. You remember that scent-tracking super nose that made them so invaluable to fox hunters? It also means that they’ll scamper off in search of adventure, regardless of whether their beloved human is in pursuit. And once they settle on a scent, no amount of fetch or walkies will distract them from their sniffy investigations.

Now that their problems are out of the way, we can focus on why the Beagle is such a gem. For starters, you’re not likely to find a more affable dog. If you socialise them early, the Beagle should befriend your partner, your friends, the pizza delivery person, and total strangers. Whether you have no children or a horde of little ones, the Beagle will warm to your family. The same goes for other pets. Whether you have a cat, dog, or ring-tailed lemur, your Beagle will willingly join their pack.

Now, if you’re looking for a snuggle-bug, the Beagle is the dog for you. They love wiggling into tight spaces, and they’re the perfect size to fall asleep in your arms, exactly where they want to be.

To sum it up, a Beagle’s sweet, optimistic nature is downright infectious. It’s hard to be in a bad mood around this chipper little pet. And, the more time you spend with them, the easier it will be to forgive their more challenging traits.

Alright, you knew this was coming: the moment we tell you the Beagle is notoriously hard to train. True, they don’t take to training as readily as some other dogs, but that doesn’t mean that a Beagle can’t pass puppy school with flying colours! The key is to implement some tried-and-true tricks for Beagle training:

They may look small but they’ve got a mighty amount of energy! Beagles need about a half hour to an hour of exercise per day. And they usually won’t tire themselves out if you simply let them loose in the backyard. Instead, try out these Beagle-friendly exercise activities:

Beagles are active dogs, but they can be prone to obesity. Make sure to get your Beagle on a healthy, all-natural diet for dogs that will keep them fit and energised!

As far as living conditions go, the Beagle adapts surprisingly well to apartment living for such an inquisitive dog. Having said that, their fondness for barking can irritate neighbours who live in close proximity.

As we mentioned earlier, most Beagles will live well alongside children and other pets. However, this social streak has a flipside: if you leave them on their own for too long, they’ll become distressed. You can then expect them to chew furniture, dig holes, and make a mess. More importantly, though, they’ll carry their disquiet long after you’ve returned home. For those who can’t remain with their Beagle during the day, we recommend looking into Doggy Daycare.

Because they have a short coat, grooming a Beagle is pretty straight forward. You’ll want to brush them with a deshedding brush about once per week, and wash them when they get particularly dirty. With their adventurous spirit, this could be anywhere between every 2 to 6 months.

Special grooming attention should be paid to those ears, which are heavy enough to prevent air flow in the ear canal. Check them regularly, especially if your Beagle has been around water.

Nail trimming and tooth brushing are the only other grooming needs for this doggo!

As we mentioned, Beagles are at higher risk than average for obesity. Here are a few other health concerns that Owners should watch out for:

When they come from responsible breeders, Beagles tend to be healthy dogs. But no matter what, you should get them covered by a dependable pet insurance plan in case any health issues come up.

Excuse our French, but we’d be wrong not to mention that there is an alternative origin for this breed’s name. The French word begueule, which sounds very much like Beagle, translates literally to open mouth or gaping mouth.

A begueulle in traditional French was considered a loud person, prone to shouting. Given their penchant for howling, it’s easy to see why this possible name origin holds water!

Final Thoughts on the Beagle

What can we say about a dog breed that has so successfully won the hearts of the global dog loving community? These puppers are friendly, fun, energetic, and good-humoured. They make the perfect family pet for a variety of households and lifestyles.

They do come with their own challenges for Pet Owners, including a touch of stubbornness, a drawn out potty training schedule, and a bellowing howl that you’ll hear from way down the street. But, if you can roll with those Beagle puppy punches, you’ll have a companion that has earned its role as one of the world’s most popular dog breeds.

10 Dog Breeds Which Shed the Most Copy

Had a beagle growing up, every time dog catcher was around, he’d just call “Rebel, and Rebel would run to the catcher and get into his truck.😂😂