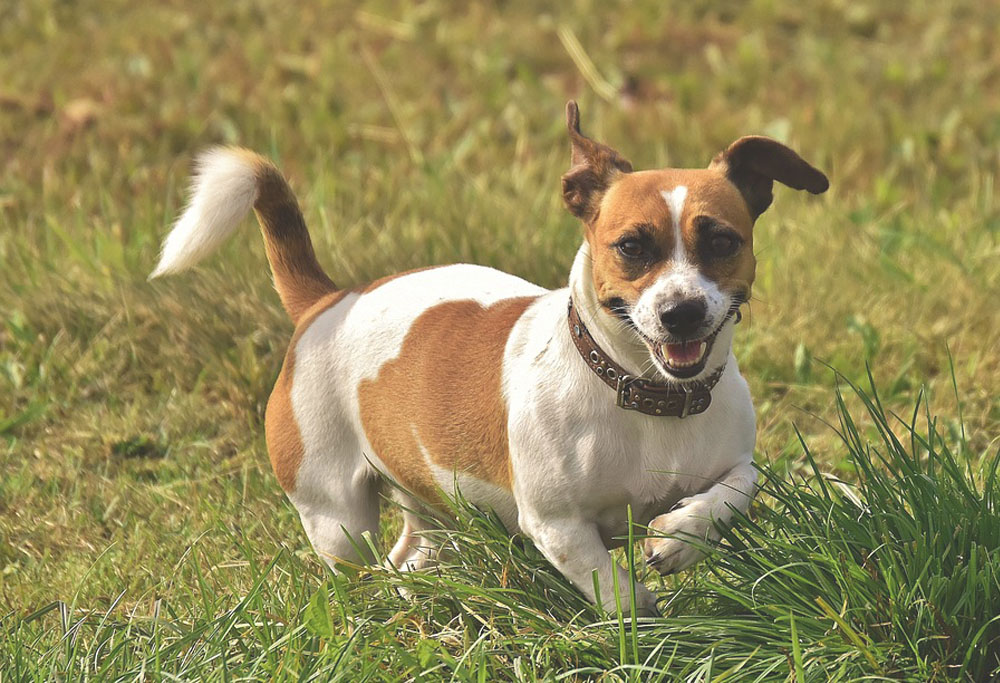 The Jack Russell Terrier is a doggo with unmatched feistiness you’ll never forget! But don’t let that fool you – this dog is a real sweetie on the inside. Check out the Jack Russell’s origins, personality, trainability, grooming needs and more! Does your Jack Russell Terrier need a carer who knows that big things come in small packages? Find a top Pet Sitter in Canberra, Adelaide, or wherever you need one! 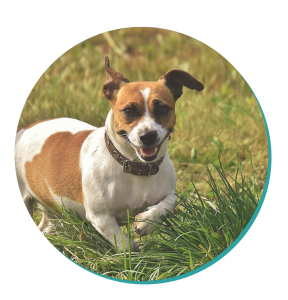 Jack Russell Terriers are one of the most recognisable of all the terrier breeds. With those half-floppy ears (called drop ears by the experts), white body, tip-toe stance, and unforgettable brown face markings, you can easily pick out a Jack Russell Terrier from the rest of the pack. Where did these handsome little puppers come from?

Parson John Russell started breeding these dogs around 1830. As a hunter, he was on the lookout for a dog who could perform a very specific task that his larger hunting hounds could not do. Namely, he needed a little terrier to flush foxes out of their fox holes so that the hounds could chase after them.

His ideal dog would be athletic enough to keep up with the hounds, small enough to get into the hole, and brave enough to come head to head with whatever animal was waiting in the darkness. This dog would also need to follow directions well and make split-second decisions independently. Perhaps most importantly to Parson John Russell, this dog needed to have a high hunting drive.

There were also quite a few physical characteristics that he needed for his fox-flushing dog. This new breed would need a small, flexible body with straight legs, a narrow chest, and a pointed snout for burrowing and manoeuvring in tight spaces.

It took Parson John Russell many years to finally breed a dog who could fulfil all of his hunting requirements. Because he wasn’t looking to create a strict breed standard, the Jack Russell Terrier was drawn from a variety of different breeds. If Parson John Russell thought another dog breed had a good hunting trait, that was good enough for the Jack Russell Terrier gene pool.

There’s even a variation within the breed with longer legs and a more narrow chest for those looking to recreate the pre-20th century Jack Russell Terrier. These dogs are sometimes referred to as Parson Jack Russells.

Given their hunting background, you can imagine the large personality that comes with this little dog. Jack Russells can be tough and assertive, bordering on aggressive without proper training. And they’re extremely loyal to their Beloved Owners.

One of the most striking things about the Jack Russell Terrier is their intelligence. This is one wily doggo, and you may have to take extra precaution to make sure that they’re well-stimulated to lower the risk for home destruction. When they’re bored, a Jack Russell Terrier can do exactly what they were bred to do – dig into every interesting thing they can find.

With proper socialisation and early, consistent training, Jack Russells can get along well with other dogs. But proceed with caution here. Jack Russells are used to holding their own, and aggression is something to be overcome with this breed. That, of course, doesn’t mean that you shouldn’t try! Just keep it in mind if you’re thinking of introducing another dog into the household.

Unfortunately, the same can’t be said for other kinds of animals. If Parson John Russell accomplished any of his goals perfectly, it was to create a hunting-driven dog. This breed might not be safe around cats, hamsters, or any other small pet that could trigger its hunting instincts. Even small children have a tendency to trigger the Jack Russell Terrier’s nipping habits, so they’re often not recommended in a household with young kids. Is every Jack Russell going to act this way? Of course not! But, it’s important that potential Jack Russell Owners know the risk before bringing one home.

Hunting instincts aside, this dog is lively and humorous. They love to have the attention of their favourite humans, and they’ll gladly play for hours on end. Jack Russells captivate their family with their fun antics and wonderful personality. They are the true ring leaders of any household.

These dogs have a bad reputation when it comes to training. But because of the high risk for prey drive and aggression in the Jack Russell, it’s important to push through anyway.

Once you build a consistent training schedule and good relationship with your pup, you’ll see that this dog is just as trainable as any other. After all, the early Jack Russells needed to be obedient while hunting, and it’s just a matter of finding the right training techniques that your unique doggo will respond to.

In general, positive reinforcement training is one of the most effective ways to go about training a dog like the Jack Russell Terrier. This is a smart doggo with a “What’s in it for me?” mentality. When they see that there are tasty treats and positive praise from their favourite humans to gain from following commands, they’ll drop the stubbornness act and commit.

In terms of socialisation, Jack Russells should get training as early as possible. When they learn that other dogs and newcomers are friends not foes, that confidence will allow them to make lovely friendships with everyone they meet. If you’re bringing home an older Jack Russell Terrier with aggression issues, you’ll want to take things much more slowly. You might consider whether muzzle training is right for your pup during the socialisation process.

When you have a little dog with a lot of energy, some changes usually need to be made to the home.

Make sure that all food items and other interesting things around the house are properly stored and locked away. This will ensure that you don’t come home to kibble-littered floor, ripped up garbage bags or even your favourite clothes strewn around everywhere.

If you have a fenced yard, double check that it’s Jack Russell Terrier-proofed. These dogs are quite the escape artists, so you’ll need to reinforce those outdoor areas and limit your dog’s free time outside.

And, if your Jack Russell Terrier shows these escape-artist tendencies, it’s a good idea to let your trusted Pet Sitter know to keep a closer eye on your fur baby.

Keep in mind, as well, that this is a smaller pup. Especially when they get up in years, they’ll require some extra features throughout the home to make sure that they can stay mobile. Ramps are wonderful additions, and you might also consider puppy gates to keep them away from slippery stairs or other potentially dangerous parts of the home.

This dog is one little athlete! They are not content to be the typical small lapdog, and it’s helpful to understand just how much exercise they need if you’re thinking of adding one to the family.

In order for your Jack Russell to be content and satisfied, be ready to take this dog out multiple times per day. You might also have to arrange for some at-home playtime. Otherwise, this is a dog that will chew through, dig into, and rip up anything they can while you’re away. In fact, many Jack Russell Terrier Owners insist on having a dedicated Dog Walker for the days that they can’t reach their doggo’s exercise limit. It’s the best way to avoid total destruction.

Unlike some small dogs who may be at risk for being overpowered in the dog park, a Jack Russell was bred to keep up with the big dogs. As long as their aggression is under control, there’s no need to worry about this little running alongside the bigger breeds.

Jack Russell Terriers are perfect candidates for agility training and other competitive sports. You’ll have a great time training your little pup for these high-energy games.

Grooming a Jack Russell Terrier is easy and quick. Once a week, give them a good brushing to loosen any dead skin and hair so that their coat stays healthy and shiny.

Wiry-haired Jack Russells will require a slightly different grooming routine. Owners of these dogs often rely on groomers to strip or clip the coat for optimum health.

A bath once every six weeks is a good rule of thumb, or whenever this digging-oriented pup goes crazy in the dirt. Don’t overdo it, though, or else you’ll risk stripping your pup’s natural oils.

As with all dogs, especially small ones, teeth brushing is a necessary part of grooming. Make sure to set up a regular routine for good dental hygiene.

This is generally a healthy breed, but there are a few issues to look out for:

By this point, you know that the Jack Russell can do just about anything it sets its mind to. But did you know that these dogs were once part of the most successful advertising campaigns of the 20th century?

Meet Nipper the Jack Russell Terrier mix. Nipper lived between 1884 and 1895 in Bristol, England, and was named after his favourite pastime: nipping at the heels of his Owner’s guests.

Nipper’s Owner, Francis Barraud loved the humorous way that Nipper would stare at a cylinder phonograph, snout basically buried in the horn of the confuddling machine as it played audio recordings. Three years after Nipper passed on, Francis sat down to paint his beloved pet doing the thing he always found so funny. The painting was named “His Master’s Voice.”

Francis was eventually able to sell his painting to The Gramophone Company, who requested that the phonogram be replaced with a gramophone (Nipper probably knew the difference between the two, although we might have trouble today). From there, Nipper would be catapulted into marketing fame. You’ve probably seen this adorable pooch with his snout in a gramophone, all these years later.

Now, we should say that there are some critics who wonder whether Nipper really was a Jack Russell Terrier or some kind of Fox Terrier. His family believed him to be a good-old JRT so we’ll take their word for it! Either way, Nipper was a good boy!

Final Thoughts on the Jack Russell

The Jack Russell Terrier is a classic, distinguished little doggo. They will amaze you with their self-assurance, colourful personality and bravery. And while they do require some intensive training and regular exercise to dampen their hunting instinct, this is really a wonderful family dog in the right setting.

If you’re looking for a dog with boundless energy and funny antics to keep you smiling, look no further than the Jack Russell Terrier. They’ve burrowed themselves into the realm of most popular dog breeds, and with their dazzling personality, it’s easy to see why.