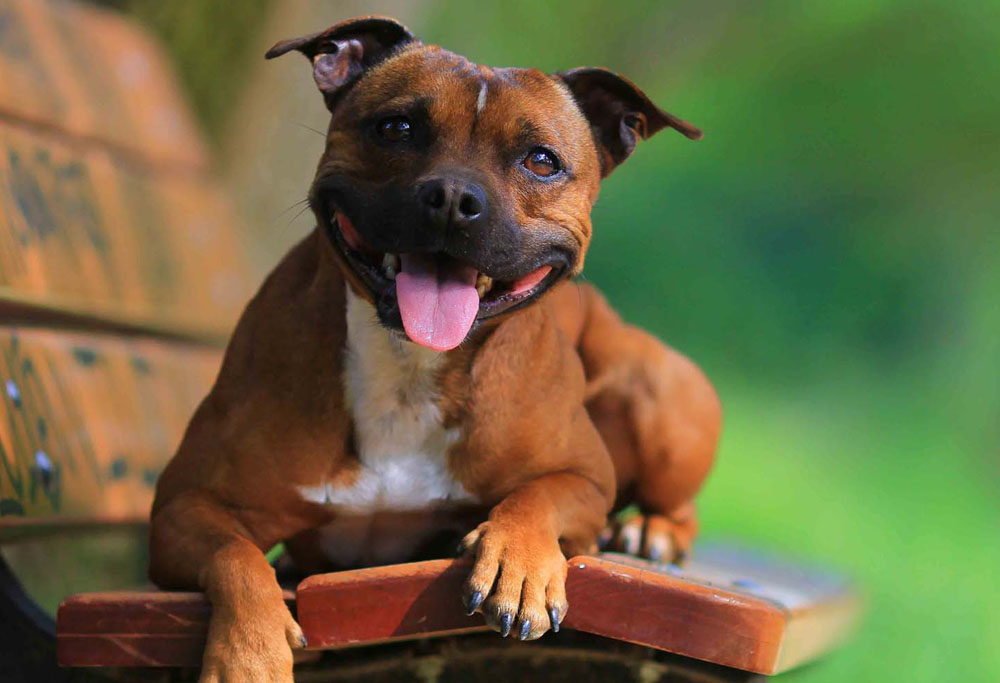 In Dog Breed Corner this month is the Staffordshire Bull Terrier! Check out the Staffy’s stats, personality, trainability, health, grooming and more. Do you have a Staffy that needs some TLC? Book a Dog Sitter in Sydney, Perth, Melbourne, or anywhere else in Australia! 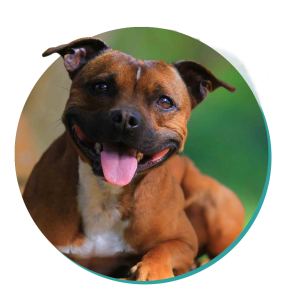 Whenever we highlight one of the bully breeds, the saddest part is relaying their early history. As the name reveals, the Staffordshire Bull Terrier was bred specifically for bull baiting and other animal-on-animal spectacles. Breeders saw the Staffordshire Bull Terrier as the ultimate fighting dog, combining the strength and persistence of Bulldogs with the energy and hunting drive of the Terrier group.

In the early days of the 19th century, Staffordshire Bull Terriers were called the “Bull-and-Terrier” or “Half and Half.” This dog was barrel-chested, stocky, muscular, and with small folded ears that didn’t need to be cropped as well as a medium-lengthed tail that didn’t require docking. The short snout allowed the Staffordshire Bull Terrier to have a strong bite force without having as much difficulty breathing as the brachycephalic breeds.

And there was one final thing that breeders included in their search for this ultimate pit dog: friendliness with handlers. They wanted a dog that could go from bravery in the ring to gentleness at home. It’s this characteristic that breeders kept long after humans realised the inhumanness of animal fighting and outlawed bull baiting across Europe in 1835.

Since those early days in the pit, the lives of Staffordshire Bull Terrier dogs have changed dramatically. Now, these muscular little doggos are able to live to their full potential as the ultimate companion dog. They’ve been winning championships in the show ring after becoming a recognised breed in 1925, but most are not so interested in the spotlight. Instead, their ultimate goal is to be the perfect family pet.

Unfortunately, Staffordshire Bull Terrier dogs carry around prejudices of the past. Because they were bred to be fighters, many people still see them as dangerous. But spend a little bit of time around a Staffy and you’ll see their true colours.

These doggos put their all into whatever they do. This is not the dog at the dog park sniffing around quietly. A Staffordshire Bull Terrier will be the dog running around to exhaustion, enticing everyone to play, catching frisbees, burying tennis balls, rolling around in the dirt, and generally running amok. And when they cuddle? A Staffordshire Bull Terrier won’t simply put their snout gently on your arm. They’ll be 100% in your lap, nozzle nuzzled into your neck, demanding back pats. This is one passionate doggo, and we’ll talk in the next section about what wonderful dogs they are to train.

But back to that lovable ear-to-ear smile. Not only is the Staffordshire Bull Terrier’s good humour infectious, but this is a dog with so much love to give. And it’s not by chance. Once the breed became popular as a family dog, breeders made a conscious effort to breed out aggression. At the same time, they wanted to strengthen the gentle characteristics that were there from the beginning. Staffordshire Bull Terriers have the nickname the “nanny dog” because they are wonderful around kids and other animals. You can read our article with 5 Tips for Introducing Dogs to Babies to learn more about family doggos.

They’re fiercely loyal to their Dog Owners and trusted Pet Sitters, and with proper socialisation, they will warm up to strangers quickly.

Okay, pause. If this breed is so wonderful, why is there so much bad press for the Staffordshire Bull Terrier? Surely, those negative assumptions didn’t come out of thin air. To be fair, there have been quite a few news stories about Staffy related dog attacks in Australia this year. Yet the statistics paint a slightly different picture.

According to data released by the Department of Premier and Cabinet in NSW, Staffordshire Bull Terriers ranked 20th in the breeds most commonly associated with dog attacks. That meant that they were less likely to be involved in an attack than many other breeds like the Siberian Husky, the Great Dane, the Toy Fox Terrier and even that little meatball, the American Bulldog.

To flesh out the discussion even further, there are some experts that suggest that breed is a poor predictor for dog attacks to begin with. Some interesting statistics from the American Veterinary Medical Association found that Dog Ownership factors were much more reliable predictors. These included animal abuse and neglect, improper training, failing to spay or neuter the dog, keeping the dog chained up outside rather than in the house, and more.

With the right Owner, the Staffordshire Bull Terrier is a happy-go-lucky, gentle, caring doggo. Make sure they’re trained, socialised, and made to feel a part of the family, and you’ll have a Staffy that defies the bad image.

As we mentioned, the Staffordshire Bull Terrier commits wholeheartedly to everything they do. As long as you start training them early and often, they’ll put all of their energy into your training sessions.

The trick is to recognise that the Staffordshire Bull Terrier has a bit of a stubborn streak and work around it. One of the mistakes that some Staffy Owners make is to use harsh measures in the training process as a way to overpower this stubborn streak. Not only is this training method less effective than positive reinforcement training in general, but it can make any dog with some stubbornness reject training completely.

Instead, focus on what makes your Staffordshire Bull Terrier excited to train with you. These dogs are food motivated and people-oriented. When you show them that training can provide them with their favourite treats and quality time with their favourite humans, your Staffy’s attitude towards training will change completely. They’ll be begging you to teach them new tricks.

Early in your training, you’ll want to focus on proper leash etiquette. Because Staffordshire Bull Terriers are so strong and low to the ground, they tend to beat out even the strongest of Owners in a game of tug-of-war. Instead of struggling against your Staffy, make sure to dedicate time into leash training. It’ll be better for you, your Staffordshire Bull Terrier, and your dedicated Dog Walker.

One of the most important parts of Staffordshire Bull Terrier training is socialisation. As soon as they’re old enough to be out and about in the world, they should be. As puppies, you can take them to the dog park, on walks in crowded areas, and to your family gatherings. It’s one of the best ways to get them used to being around people and other animals, and it will help to counter some of the fear and hesitation that people have around Staffies.

If you’ve adopted a Staffordshire Bull Terrier from a shelter or adoption agency, you’ll want to go about the socialisation process with a bit more mindfulness. A Staffy from a shelter may come with a bit more trepidation about the world, and the socialisation process will take a bit more time. But don’t give up! Staffies need interaction with others so that they can live up to their friendly potential.

Staffordshire Bull Terriers are medium dogs which don’t need a lot of space at home to be happy. That said, they do not like to be left outside and would much prefer cuddling up to their Owners inside.

This is a dog that needs a moderate amount of exercise. Definitely less than some other working breeds, but more than your average Bulldog. You’ll notice that more than rigorous exercise, your Staffordshire Bull Terrier will benefit from mental stimulation. Their intelligence makes them ideal breeds to explore obedience agility, fly ball and other activities to keep them challenged and content.

Be prepared also for a dog that may be a talented escape artist. We’ve seen Staffies scale so-called dog-proof fences with ease. They may be small, but that low centre of gravity and muscular build makes them excellent at climbing, burrowing, and otherwise outsmarting whatever enclosure you put them in. Take a look at our article on How to Install a Dog-Proof Fence for more tips on how to Staffy-fy your backyard space.

Often, escaping behaviours occur when Staffordshire Bull Terriers are understimulated, so a simple trick might also be to hire a trusted Dog Walker to take your Staffy for a fun walk every day.

The Staffordshire Bull Terrier has a short smooth coat that doesn’t require as much care as other breeds. But, there’s still a bit of grooming that you’ll want to do on a regular basis to control shedding and make that coat look shiny and beautiful.

The most important tool you can have for Staffy grooming is the right brush. Soft bristled brushes are ideal for Staffordshire Bull Terriers as they won’t bother the sensitive skin but should also collect loose fur and dead skin. Grooming gloves are also popular with Staffy owners.

One thing you should know about that short coat is that it makes the Staffordshire Bull Terrier particularly susceptible to heat and cold – Owners must be extra vigilant to protect their Staffy’s skin from the elements on particularly hot or cold days, as their coat does not provide protection. This is one more reason why Staffordshire Bull Terriers should not be considered outdoor dogs. They would be much more comfortable sharing your temperature regulated home with you.

In general, Staffordshire Bull Terriers are healthy and at low risk for most genetic problems. However, they may be vulnerable to common issues such as hip and elbow dysplasia, patellar luxation and some eye conditions.

Allergies are also quite common in Staffordshire Bull Terriers, so make sure to have them assessed for allergies if they start showing symptoms.

Australians love Staffies! In 2017, they were rated the second most popular dog, right after the Labrador Retriever. Maybe it’s that short stocky build. Maybe it’s their lovable character. Whatever it is, Australians continue to adopt Staffordshire Bull Terriers in record numbers.

Whatever you thought you knew about the Staffordshire Bull Terrier, this breed is all about defying stereotypes. Despite their muscular build, this is a gentle, sweet doggo who just wants to spend time with their favourite people.

They need a moderate amount of exercise and plenty of mental stimulation to stay calm and happy, and they definitely should not be left outside or away from their beloved Owners for too long. Training is a big part of having a Staffordshire Bull Terrier so make sure you can put in the time.

Overall, if you’re looking for a dog with plenty of personality, a high work ethic, and smiles for days, get to know a Staffordshire Bull Terrier. You’ll fall in love.

How To Stop Your Dog Eating Too Fast

Hello, I log on to your blogs on a regular basis. Your humoristic
style is witty, keep doing what you’re doing!