Cleaning out the litter box is a nuisance, sure, but could it actually be dangerous for you? You may have heard some unnerving claims lately that cat poop might cause mental illness in humans. If you have, you’ve probably been looking at that litter box with a whole new kind of alarm.

However, before you panic, let’s get to the bottom of this feline phenomenon. And remember that you absolutely love that crazy little fluff ball, crazy cat poop and all. 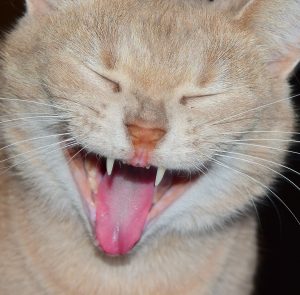 What is the science really saying about cat poop?

We’ll come right out and tell you: the science is not in agreement about this whole thing. To be as clear as we can, let’s start at the beginning. Why did scientists start exploring this area in the first place, and is there cause to be worried?

It all relates to something called Toxoplasma gondii, a microorganism which is responsible for the disease toxoplasmosis. Cats, because of their taste for rodents and birds, are more likely to carry this microorganism. In turn, this means they’re more likely to deposit it right into the litter box. Eek!

Much of what we know about this frightening little microorganism comes from our research with rodents. When exposed to the disease, rodents show a loss of fear when facing their big enemy: cats. Scientists believe that these behavioral changes happen in rodents because the disease causes cysts in the brain. Beyond this, they think it could manifest in human neurons, although it’s not clear what the effect would be.

One of the more common theories was that the microorganism could lead to schizophrenia. Back in 2003, the Emerging Infectious Diseases Journal published a study suggesting that participants with schizophrenia were more likely to have lived with a cat in childhood. The article also claimed that schizophrenia is more likely to occur in countries with higher rates of toxoplasma gondii carriers.

As such, it’s not surprising that we all became a bit nervous around the litter box.

Thankfully, another article published in 2016 challenged the earlier one. In this study, scientists explored the link between owning cats in childhood and developing schizophrenia later in life. The results of the study? No, there wasn’t enough data to support the claim that toxoplasma gondii led to schizophrenia or other behavioral problems.

With such mixed evidence, what can you believe? Well, unfortunately, we may not get the black-and-white answer we all want.

These kinds of studies are difficult to conduct, and it’s even harder to prove that toxoplasma gondii is the root cause of behavioral problems. One possible assumption would be that people with a predisposition to mental illnesses like schizophrenia may be more likely to show symptoms because of the way this microorganism interacts with the brain. Having said that, we don’t know for sure. People suffer mental illness for any number of reasons, so it’s difficult to make conclusions about causes.

Overall, it’s not something you should be losing sleep over, and you certainly shouldn’t send your beloved cat packing.

Even though science can’t say for certain that your cat will give you toxoplasmosis, there are still a few preventative steps you can take to lower the likelihood of exposure.

On the one hand, you can keep your cat inside. Indoor cats are safer and healthier in general, partly because they won’t be outside munching on their latest kill.

You can also keep your home rodent-free. If you’ve had a rodent problem in the past, it might be worth calling a professional to make sure there are no entry points for mice or rats. This way, you’re blocking the bearers of toxoplasma gondii.

Another thing is that toxoplasma gondii is much more likely to spread through the water supply than through cat poop. To combat this, you can reach out to your local council to ensure they’ve taken steps to lower the risk.

Take a deep breath and give your cat some love

Despite the scary headlines out there, you can relax. Your feline friend isn’t trying to give you brain-altering microorganisms. In other words, give them a cuddle and some treats. They deserve it!

Do you want a Sitter who will go crazy over your cat? Mad Paws’ Cat Sitters are here for your feline friend! Whether you live in the Central Coast, Townsville, or anywhere else ’round the country, your Sitter will do everything for their kitty – even remove cat poop from their litter tray!