The Chow Chow looks like a big old cuddly bear. In this Dog Breed Corner, we’re going to explore the history, personality, and grooming needs of this fluffy pooch. 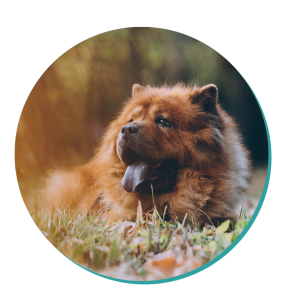 The Chow Chow has quite an impressive history. There are paintings of this dog on ancient artifacts in Northern China, and genetic tests have shown that this dog might be as old as the Han Dynasty of 206AD! Some historians say that the Chow Chow is even older than that.

Chows were used for a variety of different purposes. They were popular hunting dogs. They could guard the house. They could be used for herding. And perhaps more than anything, they were noble and impressive to look at when guests came over. It was its versatility that made this breed particularly popular with wealthy families.

The Chow Chow made their way to the rest of the world on English trade ships in the late 1700s. The breed was instantly popular, but became even more so when Queen Victoria took an interest in them.

By 1903, the breed had gained recognition by the American Kennel Club.

People frequently compare the Chow Chow to cats, and you can see why. Chows can be a bit standoffish and independent. Also like cats, they can be territorial. Some Chow Chows will show aggression with other dogs, so socialisation and training are very important.

However, while Chows may be a somewhat demanding breed, they are also extremely loyal, attentive, intelligent, and respectful to their Owners.

This intelligence can be both a burden and an advantage when it comes to training. On the one hand, they have the potential to learn quickly. On the other, their stubbornness can make training a challenge, so it will take some creativity to figure out how to capture the Chow Chow’s attention.

Again, socialisation is an absolute must when it comes to this breed. Especially if they’re going to be in a household with children or other animals, it’s important to expose them as puppies so that they don’t become aggressive and dominant.

Barking is another reason to train Chows early. With their background as guard dogs, they will develop a warning bark habit if they’re not trained. That said, once they’ve learned not to sound the alarm, they are naturally quiet pups.

Unlike most dogs of the same size, the Chow Chow don’t have a huge exercise need. They should get out of the house for about an hour a day, but that time doesn’t have to be spent doing vigorous exercise. Leave a Chow to explore at their leisure (with supervision, of course), and they’ll be happy.

Many Owners assume that swimming is a great way to exercise dogs. When it comes to the Chow, though, you have to be careful about the heaviness of their coat. Some splashing around in shallow waters is great, but full-on swimming may be a bit too much for this not-so-active doggo. And, of course, there’s the issue of grooming all that wet fur.

Speaking of grooming, you’re going to be doing a lot of it. Whether you have a smooth or rough coat Chow, you should brush every day to prevent matting and tangles.

A full grooming session only needs to occur every week or two, given that you give your Chow Chow a quick brush daily. And, while this breed tends to be pretty clean, you might consider bathing your Chow once every two weeks or so.

For this breed’s fun fact, you’ll have to take a look inside their mouth. Chow Chows are one of only two breeds in the world with a black tongue.

But that’s not all! They also have two more teeth than the average pup.

Dog Years to Human Years: What You Need to Know