Dog Years to Human Years: What You Need to Know

You’ve probably heard the term dog years to human years. The idea is that each year of your dog’s life are worth seven of your own. But how accurate is this comparison? Does a small dog age the same as a big dog? How about breed and lifestyle?

In this article, we’re going explore the many factors that go into a dog’s “true” age. Because whether your dog is an old soul or a puppy at heart, it’s a good idea to know at what life stage your furry friend is in. 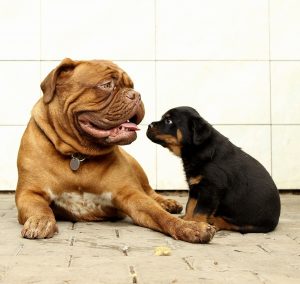 First of all, what’s wrong with the classic “dog years to human years” system?

Although the seven-to-one rule is convenient, it doesn’t really work when we talk about how dogs age. That’s because puppies mature at a much faster rate than us. In fact, by around 18 months, your dog has developed by leaps and bounds: they can take care of themselves, they can start a little doggy family, and they have a fully-developed brain.

When compared to the rapid development of those first two years, ageing slows significantly after that 18 month mark. Although your pooch will likely stay active and energetic for quite a few years, the ageing process doesn’t happen on the same trajectory as when they were puppies.

That’s why it doesn’t really make sense to add another seven years at each of your dog’s birthdays. And when you add in factors like breed and lifestyle, the equation gets tricker still. At this point, the “dog years to human years” adage becomes a bit messy.

What does size have to do with it?

Larger breeds tend to age at a faster rate than smaller ones. In fact, dogs weighing over 22kgs are considered to be senior at around five years old. Smaller dogs, on the other hand, may be considered senior at 7.

Let’s break down the math a bit. According to American Kennel Club’s dog age chart, the first year of a dog’s life accounts for roughly 15 human years. The second year accounts for another nine. For three years after that, each year is worth about four human years. That goes for all dog sizes. At this point, then, all 5-year-old dogs can be considered 36 years old.

After five years, though, ageing will pick up speed again for larger dogs. The next year will account for nine human years. The years after that will translate to between five and six human years.

For small dogs under 9 kg, this increase in the speed of ageing isn’t so rapid. A small breed dog can add another four years each additional year after they turn five. And if your dog is in the middle, you can add between four and five human years onto each year of life.

Alright, pause. What does that all mean for average lifespans? Well, for a large dog, like a Saint Bernard, you can expect a lifespan of between eight to 10 years. For a tiny Papillon or a Yorkshire Terrier, it’s more like 10 to 16 years. Again, this throws a spanner in the works of the “dog years to human years” idea.

What are the other ageing factors?

Good health and hygiene are two of the biggest factors for extending your dog’s happy life. Beyond anything else, they can shape a dog’s age median more than any “dog years to human years” ratio.

Obesity, in particular, threatens the length of your doggo’s life. Even studies including different breeds showed that obesity can shorten a dog’s lifespan by up to 2 to 2.5 years. Similar to humans, obese or overweight dogs can develop serious conditions like diabetes, high blood pressure, orthopaedic problems, and more.

Dental health is another important part of a dog’s longevity. Since we don’t often pay much attention to our dogs’ teeth, diseases like periodontal disease can take hold and create problems in other parts of the body, including the heart.

Another surprising way to lengthen the life of your furry friend is to get them fixed. Neutering and spaying prevents certain types of cancer and can help to quash some problematic behaviours that could threaten the safety of your pet.

And finally, anxiety. Dogs living with anxiety-related disorders, especially fear of people or other dogs, tend to live shorter lives than their relaxed counterparts. If you have a stressed out doggo, it’s not a good idea to isolate them. Instead, look into your options for safe socialisation and exposure.

What are some considerations when you’re adopting a new furry friend?

No matter what doggo you choose, bringing a pet into your life is going to be a huge commitment and a wonderful joy. And now that you know a bit more about life expectancies, you can make a more informed decision about the kind of dog you might adopt.

As we mentioned, small dog breeds tend to live the longest, and some require less exercise than medium- to large-sized breeds. What that means is that any puppy you bring into your life could be with you for 15 to 16 years. On the other hand, larger dog breeds may require more exercise and have a tendency to have shorter lifespans. These are important factors when you consider your lifestyle and what you may have in mind over the next decade.

If, for instance, you want a companion for the long-term, you might consider a Poodle or a Boston Terrier. If you worry about your life changing dramatically within the next ten years, then a Great Dane or a Newfoundland might be more appropriate for you. Remember, lifespan is only one part of finding your furry match. You should also consider things like temperament, health needs, and grooming.

And, adopting a puppy is the option that many people choose, but you might consider adopting a senior dog instead. Of course, based on the breed and health history, you need to make sure that you’re ready to take on the responsibility that might come with an older dog. Senior dogs will win your love pretty much immediately, but you have to be ready to give them a peaceful few years. Unfortunately, you’ll also need to say goodbye sooner than you would with a younger pup. On the plus side, in many respects, older dogs can be easier to train than puppies.

To sum it up

As you can see, there are many different factors that go into a dog’s life expectancy. Indeed, while the “dog years to human years” comparison can be handy, it has its limits. Whether you already have a pooch or are looking to adopt one, the best thing you can do is give your dog plenty of love and care so that they’re as happy and as healthy as can be!

How to Help Your Dog Age Gracefully

How Often Should I Brush My Dog’s Teeth?

How Does Bushfire Smoke Affect Your Pet?

Inspiring article! Just realised how old my dog actually is.