In this month’s Dog Breed Corner, we lay out an extra-large welcome mat for the Saint Bernard. Check out the Saint Bernard’s origins, personality, trainability, doggy eating requirements, and more! 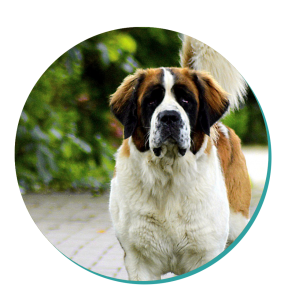 Where did the name Saint Bernard come from? Were these dogs always so gentle? And what does the actor Joseph Gordon-Levitt have to do with this breed’s history?

Let’s travel back to the start of a very interesting breed!

Before we talk about the doggos, we have to begin our story in the highest, and perhaps most famous, mountain pass of the Swiss Alps. Here, the Romans constructed a road linking Italy and Switzerland in 69AD, despite the unforgiving weather conditions. Throughout its history, this mountainous passageway would gain a dark reputation, known as the escape route for thieves and marauders. And in 1800, Napoleon’s army would successfully cross the treacherous pass, inspiring the famous painting, Bonaparte Crossing the Alps.

Have any guesses about the name? We’re talking about the infamous Great Saint Bernard Pass.

This harsh history explains, then, why the early version of the Saint Bernard dog was not the savior that we know today, but rather, a fierce guard dog. These huge dogs were bred to protect the local hospice, founded in the 11th century by Saint Bernard, himself, and run by a group of monks.

Before long, the monks realised the large frames, thick coats, keen noses, and loyal temperaments of these dogs made them an asset to any rescue crew. For countless travellers stranded by a snowstorm in the Pass, the sight of these gentle giants meant they had been saved.

During the early 19th century, England and Germany began to import the breed. It wasn’t until 1880 that the breed officially gained recognition as the “Saint Bernard” by the Swiss Kennel Club. Before that point, they had sported a number of names: Alpine Mastiffs, Hospice Dogs, Barryhunds, and Alpendogs, to name a few.

So, when does Joseph Gordon-Levitt come onto the scene? Not until 1992, with his debut role in the Saint Bernard-starring movie, Beethoven. But, don’t worry if you don’t remember seeing him. He was a minor character who only popped up once or twice during the film. The true moviestar was Beethoven, or perhaps we should say, the Beethovens. In fact, 12 dogs were used to complete the movie!

Today, you can find Saint Bernards all over the world in all kinds of working roles and family settings.

At their best, the Saint Bernard is a living tribute to the term “gentle giant”. They are a calm, patient breed, and will remain loyal to a loving Owner ’til the very end. While a Saint Bernard puppy will whiz around your home like a furry pinball, an adult will usually maintain a calm and relaxed demeanour. They read emotional cues like they’re flash cards, and will make it their goal to cheer you up. They’re also attuned to the needs of children, and will gladly take on the role of “furry ward”. Just be careful with toddlers; the Saint Bernard can grow so large they may bowl over smaller humans by mistake!

All of this gentle sensitivity has a flip side, however. The Saint Bernard depends on constant companionship to feel loved and fulfilled. If they’re left on their own for a period of several hours or more, they’ll come to feel depressed or destructive. To ensure they don’t develop destructive habits, always leave them with a family member or Pet Sitter when you’re out.

Don’t be surprised if your big hunk of a doggo seems shy around newcomers. While their days of guarding the hospice are long behind them, this shyness can sometimes bubble over into aggression. So, be sure to give them plenty of socialisation opportunities as puppies.

Saint Bernards are sometimes mistaken for lumbering, not-so-smart teddy bears. But the reality is, they are highly trainable, smart dogs who will take to your training sessions readily.

That said, don’t expect the Saint Bernard to be as energetic about training as some other breeds, like Poodles or German Shepherds. Saint Bernards take life at their own pace and will also set the rhythm of the training process. Still, these are people-loving doggos who will enjoy training sessions with their beloved Owners. So, don’t worry about a shortage of enthusiasm, even if the training is a bit slow-going.

To keep things moving, you’ll want to provide these puppers with praise and motivation. In other words, keep those treats handy when you’re teaching them anything. They’ll respond to this kind of training even quicker than you might expect.

And if you’re looking for a good starting point, make sure to focus heavily on basic obedience training. Saint Bernards are huge dogs who evolved to be independent, and they’ll beat you in a leash-pulling contest any day. Best to get them comfortable with verbal commands so that you never have to physically reign in this massive pooch.

Due to their bulk, the Saint Bernard doesn’t require the rigid exercise regime of the Australian Shepherd or Vizsla. Having said that, you will need to take them for a good stroll every day to keep them healthy. And believe us—we mean daily!

Looking to make your daily walks more engaging for this breed? Have them pull a pram, sled, or rolling luggage. As working dogs at heart, they’ll love the chance to have a job to do. As an added bonus, you’ll get to enjoy a break from pushing or carrying your groceries.

Conversely, the Saint Bernard is not an outdoor dog. The prospect of being left on their own in a sprawling backyard is not their idea of a good day. For optimum results, skip the yard and give your Bernie a spacious living room.

We should also mention that this breed tends to struggle in warmer weather. If you live in a hotter climate, you’ll need to keep the A.C. blasting lest your Bernie overheat.

Finally, in our dog breed corner, we generally focus on the living conditions that are best for a particular doggo. When it comes to the Saint Bernard, though, we wouldn’t want to skip over the impact that this dog is going to have on your living conditions, as well! More specifically, these puppers are known slobberers, and you’ll need to get used to cleaning up trails of the stuff around the home.

At a certain point in their lives at the hospice, this breed crossed with Newfoundlands. The idea was to make the dogs even more cold-resistant, but the long hair turned out to be less-than-ideal. The extra few centimetres of fur was heavy and tended to trap ice and snowballs. Still, you can find both short and long-hair varieties in the breed, with unique grooming requirements.

Before we get into the differences, it’s useful to know that both coat varieties will shed heavily. There’s simply no way around it. Twice a year, they will also undergo a “mass shedding” to shed their summer or winter coats.

For the short-haired variety, make sure to brush a few times per week. You can probably get away with one all-purpose brush for detangling and picking up loose fur.

Things are a bit more involved for the long-hair Bernies. These dogs will need to receive a brushing and combing more frequently, as those long locks are prone to matting.

Coat trimming is not recommended for this breed, even if they’re going to be living in warmer climates. However, the occasional bath or trip to the groomers is a good way to keep that coat looking beautiful. If you’re going to take your pooch to the groomers, make sure that they’ve already undergone politeness training so as not to overwhelm their stylist!

Two final grooming tips: take care of their face and get them accustomed to a toothbrush. A quick wipe around the eyes and snout will prevent staining on the face. And, the sooner you can train your pup to get on board with teeth brushing, the better. Remember, a Saint Bernard with bad breath will be even more noticeable because of their drooling habit. With this in mind, take a look at our article How Often Should I Brush My Dog’s Teeth.

Like some other giant breeds, the Saint Bernard has a sadly short lifespan of just 8 to 10 years. In addition to appreciating every minute with this cuddly pup, Owners should also be proactive about the following health concerns:

There are a few other health concerns that can pop up in this breed. Even so, you can ensure their health and wellbeing with exercise, a good diet, and regular checkups at the vet.

Fun Fact about the Saint Bernard  ♥

Full disclosure: our fun fact is actually more of a debunking. It has to do with that well-known image of the Saint Bernard with the barrel around their collar. You’ve seen it in paintings, sculptures, and on book covers. In fact, the image is so widespread that it may be the first thing you think of when you hear the breed name.

True, these dogs did carry reserves of food and water to provide life-saving sustenance to lost travelers. But the brandy or wine-filled barrel? A fabrication. And that’s probably a good thing—alcohol may have a warming sensation at first, but it can make cold winter conditions even more life-threatening.

So where did the idea come from? Probably an English teen artist, named Sir Edwin Landseer, who painted the famous piece, Alpine Mastiffs Reanimating a Distressed Traveler. In the huge oil painting, he depicted the Saint Bernards with brandy barrels, and the rumour took off. The 17-year-old probably didn’t expect his artistic license to be taken as fact for generations, but we continue to love the image of these pups with their brandy barrels!

Final Thoughts on the Saint Bernard

If you’ve always wanted a dog that could double as a teddy-bear, live-in heater, fellow couch lounger, and walking companion, the Saint Bernard is your dog. With a friendly attitude and laid-back personality, your home will be more peaceful with this large doggo.

Yes, you will need to provide this dog with plenty of elbow room, quality time, early obedience training, and regular grooming. And, with more medical concerns than the average doggo, maintaining good health is a top priority.

But, if you’re willing to take good care of this pup—and overlook the slobber!—you’ll have a wonderful life with your Saint Bernard.

Three Ways to Stop Your Dog from Waking You Up Early