This Dog Breed Corner heralds the redhead of the canine world: the Vizsla! Learn all about the Vizsla’s proud history, their training needs, and whether they’re the right dog for you. Do you Own a Vizsla that needs some extra care? Mad Paws have Dog Sitters in Adelaide, Alice Springs, and all across the land! 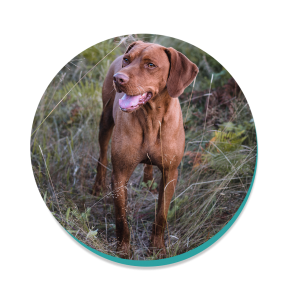 With just one look at the Vizsla, you probably wouldn’t be surprised that this is a talented hunting dog. Those intelligent eyes and alert stance highlight that this is a dog ready to jump into action at any moment. So where did this handsome pup get these incredible instincts?

Records are shaky, but we do know that Vizslas came from Hungary. That said, it’s possible that the breed goes all the way back to the 10th century. Some believe this breed is old enough to have inspired breeders to create similar hunting breeds like the Weimaraner.

And the visionary humans who created the breed? That would be the Magyar tribe, who settled modern-day Hungary a few thousand years ago. These early Hungarians were skilled hunters, using both Vizsla-like dogs and falcons to feed their nomadic communities. While they didn’t keep records of the Vizsla’s forebears, we can see these hunting dogs depicted in early Magyar art.

It’s believed that the word “Vizsla” comes from the earliest version of modern-day Hungarian, and means “to search.” Indeed, this dog was a prized hunting companion because of their ability to seek out, trap, and retrieve nearly any prey animal.

Over time, the Vizsla became a dog of nobility, owned by the wealthiest landowners and powerful families in Hungary. They were sometimes called the “Gift of Kings,” with strict breeding restrictions. On very special occasions, Hungarians gifted Vizslas as an act of high respect for royals in neighbouring kingdoms. Their Owners so treasured them that, unlike other dogs, these royal pups would never sleep outside. It may be for this reason that the Vizsla is such a wonderful family pet, with indoor manners as entrenched as their hunting skills.

By the 1800’s, Hungary was starting to breed Weimaraners and English Pointers, although the Vizsla would continue to be a dog of prestige. Skip ahead to World War I and you could find these brave doggos transporting messages along the Eastern Front.

This and the next world war would throw the Vizsla into near extinction. Fortunately, Vizsla fanciers and dog-Owning Hungarians fleeing Soviet occupation after WWII would keep this breed alive. Today, experts view the Vizsla as one of the best hunting dogs and one of the most adaptable family dogs. On their part, they seem to be happy in any of their many modern-day roles, from search and rescue canines, to bird-hunting dogs, to snuggly family pets.

The Vizsla is a dog of balance. They are as energetic as they are gentle and affectionate. As intelligent as they are puppy-like. And while they can look regal and stoic in one moment, you’ll be laughing at their goofy antics in the next.

Overall, this is a dog that loves their humans, and they’ll do anything to be in their Owner’s good graces. If you’re looking for a dog to entertain themselves in the backyard or give you some space at the end of a long day, the Vizsla is not your dog. Some Owners have even taken to calling the Vizsla the “velcro dog” because of their habit of sticking to you wherever you go. There’s simply no personal space during your life with a Vizsla.

What that means is that this is a dog who excels at snuggling. If you’re looking for a pupper to share an afternoon nap with, a Vizsla will be just the furry space heater you’ve been looking for. After all, they’ve got thousands of years of experience sharing the bed.

When it comes to other animals and younger family members, Vizslas are polite and gentle, as long as they’ve been properly socialised. In general, this isn’t the dog at the dog park picking fights with other pups. Instead, this is the pooch with lots of friends. It’s also the one that will get a lot of compliments from other Dog Owners.

With all the wonderful traits of the Vizsla, it might not surprise you that this doggo has something of a sensitive streak. They don’t like to be reprimanded harshly, and they get pretty down when left alone for too long.

Separation anxiety, as well as some destructiveness and howling, is common with Vizslas that aren’t getting enough exercise or attention. Vizsla Owners often rely on the help of a trusted Dog Walker even if they’re fairly active themselves. The extra attention is great for maintaining this pup’s morale.

Training is a wonderful way to bond with a Vizsla and keep this high energy pup engaged and happy. They absolutely love the opportunity to show their Owners what they’re capable of, and you’ll be amazed at how many new commands they can learn. Plus, they’ve got an array of intuitive skills that you’ll want to explore in your training sessions.

But first, start with the basics. Make sure these doggos get the chance to socialise safely and positively with other pups and humans early as there is a risk of them becoming shy and timid. And, of course, work on their basic commands.

One thing to keep in mind is that Vizslas are difficult to reign in once they’ve become distracted. Things like a stray bird, rustling in a bush, or interesting scent are bound to ring that inner hunt-point-retrieve bell of theirs. And because they’re fast and prone to fixation, it can be hard to reign them back in. It’s a good idea to train with a whistle so that you can be sure that they hear you no matter how exciting the distraction.

Don’t get the impression that a Vizsla is hard to train, though! Once you establish good rapport with this pooch, they’re quick learners. And if you can incorporate simulations in training sessions that hark back to their hunting days, they’ll be the ones trying to entice you to keep up with the training routine.

​The Vizsla is a highly active dog who is happiest with a highly active family. As adults, they need up to 2 hours of exercise per day, but they’ll enjoy even more if you can spare the time.

And when we say exercise, we mean more than a leisurely walk around the block. These doggos are runners (they can reach speeds of up to 64km per hour!), and they’ll tire out only after being able to get that heartrate up. Whether it’s playing fetch, romping around at the dog park, or running alongside you on a long bike ride, these dogs can go the distance with energy leftover. And if you’re looking for the perfect jogging companion, take a look at our article on How To Turn Your Dog Into A Running Partner.

You certainly don’t want there to be too much energy leftover. When not properly exercised, Vizslas can resort to barking and howling, as well as chewing up anything in sight. In fact, even with the right amount of daily exercise, it’s probably a good idea to provide them with a few chew toys around the house. Retrieving dogs like the Vizsla are known to be mouthy.

At the same time, be mindful about whether your Vizsla is going overboard with the playtime. Like many other working dogs, they won’t tell you when they’ve reached their limit. You’ll want to be especially careful about overexercising them in hot weather.

When it comes to living arrangements, Vizslas are some of the most adaptable dogs out there. As long as they get enough daily exercise and human interaction, they’ll be just as content in an apartment as they would be in a large home. If you’re not home for much of the day, a dedicated Dog Walker can be a relief for your Vizsla.

Temperature control is another thing to consider when it comes to Vizsla living conditions. That Vizsla coat may be shiny and beautiful, but it’s not great at insulating this pup from the cold. Because of their temperature sensitivity, these dogs should never be considered outdoor pets. And, when the temperatures drop, many Vizsla Owners make sure to invest in some warm doggy clothes.

Not only is the Vizsla’s coat stunning and regal, it’s also very low-maintenance. The short fur and lack of undercoat means that this doggo does not trap odours or dirt like other pups. And, you’ll regularly see Vizslas cleaning themselves like a cat.

These dogs do shed, so you might want to keep a soft bristled brush on hand for a quick grooming session every now and again. Bathing shouldn’t take place more than once every few months, or after your Vizsla has rolled in something particularly smelly.

This is a generally healthy breed with just a few medical conditions to look out for. Like many dogs of the same size, hip dysplasia can be a concern. Vets will also monitor for Progressive Retinal Atrophy, Hypothyroidism, and Epilepsy. Vizslas may also be at higher risk than normal for Lymphosarcoma, one of the most common cancers found in dogs.

In general, Vizsla breeding programs are strict about screening for genetic issues common in the breed, which is an important step towards ensuring healthy pups. Proper nutrition and exercise are also crucial for healthy growth.

And, while it’s not exactly a health condition, there is one more thing to be on the lookout for. Because of the Vizsla’s short coat and tendency to dive head-first into any exciting adventure, these puppers tend to get scratches and scrapes quite often. You might keep a first aid kit on hand whenever your Vizsla is going to be running through bushes or wooded areas.

Did you know that Vizslas are the redheads of the dog world? It’s true. That fantastic copper colour comes from a recessive gene that is not common in many other breeds. The shade may vary from deep red to pale yellow, but it’s all thanks to the recessive redheaded gene.

When talking about coat types in the Vizsla community, be careful not to make the common faux pas of mistaking a Vizsla and a Wire-haired Vizsla for the same breed. While very similar, the Wire-haired Vizsla is a separate breed recognised by the AKC. They may share a common history and that gorgeous red coat, but they are cousins with their own set of breed standards and personality traits.

Final Thoughts on the Vizsla

Built to run and accustomed to cuddles, this dog is a wonderful family companion. They’re equal amounts affectionate and energetic, which can be overwhelming to new Dog Owners or someone looking for more of a standoffish pup. And they can be quite difficult to handle when not provided with enough attention or exercise.

We wouldn’t consider the Vizsla to be a low-maintenance dog in the least, but you will spend less time grooming them than you would with other puppers. However, you will need to provide them with some fun chew toys and other boredom busters if you want your house to be safe from destruction.

A Vizsla is the ideal dog for anyone looking for a working dog, a highly trainable dog, and a dog that will always find a way to snuggle under the blankets with their favourite humans. Gentle, engaged, and loyal, it’s easy to see why the Vizsla has been so coveted for thousands of years.

Fanconi Syndrome in Dogs: What You Need to Know