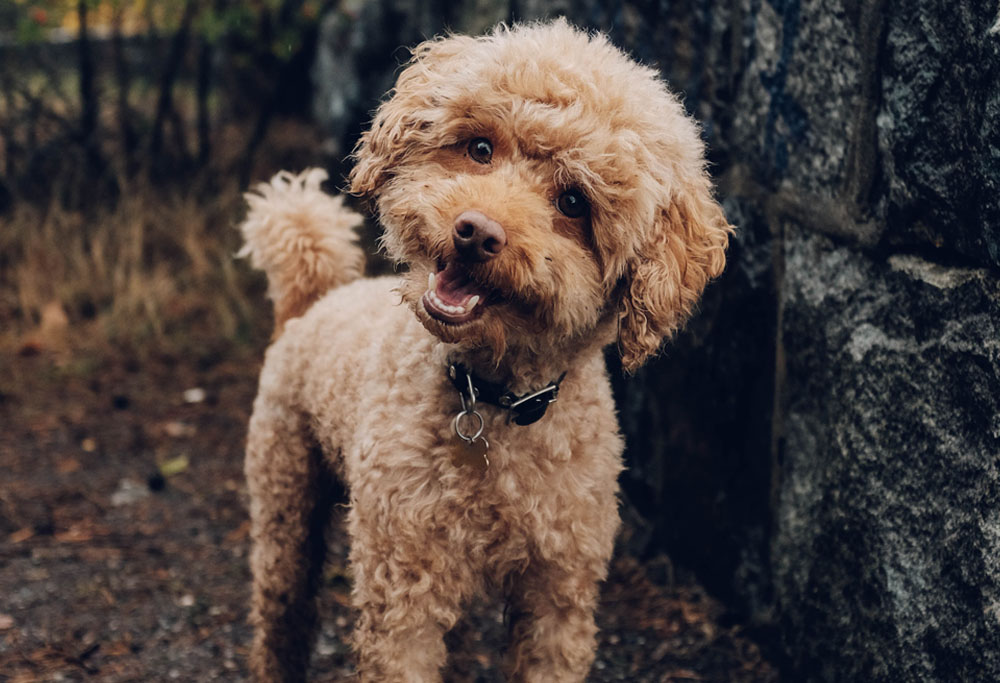 This month’s Dog Breed Corner hosts one of Australia’s favourite dogs: the Poodle. Read about the  Poodle’s history, personality, trainability, living needs, and more. If you need a top-tier carer for your Poodle, Mad Paws has Pet Sitters in Sydney, Perth, Adelaide, and all ’round Australia.

At a glance, the Poodle seems to embody the concept of “style over substance”. After all, this dog is often the prettiest pooch in the park. But this isn’t just a pampered pup. In truth, there’s a lot that we get wrong about the handsome Poodle!

Contrary to popular belief, the Poodle is not a French dog, but a German one. In fact, the word Poodle comes from the German word Pudel or Pudelhund, meaning “water dog.” In French, the breed is called Caniche, which comes from the root word, cane for “duck.” While the dog was popular in both regions, it’s Germany who is largely credited with developing the breed we know today.

This word origin reveals another common misconception about the Poodle: that they’ve always been companion animals for the wealthy and fashionable. Not so! This dog started out hunting waterfowl. Their name is a reference to their fearlessness in splashing through freezing waters to retrieve birds. And, with the gentle technique they had of carrying the bird in their chompers, which hunters call a soft mouth, these dogs made quite the impression in hunting circles.

Okay, well, surely, that over-the-top Poodle haircut is a modern fashion statement. Wrong again! The Poodle cut may not look like the work of a 17th century hunter, but the Poodle-do does date back to that time. To make this dog faster, more buoyant, and better equipped for harsh weather conditions, strategic areas of the Poodle’s coat were shaved or kept long. Even that top knot serves the purpose of clearing the Poodle’s vision to better see their avian targets.

And, like the Standard Poodle, the minis were bred for work instead of companionship. With their low-to-the-ground stature, they were renowned truffle sniffers.

So, the Poodle we know and love was honed during this time to be the perfect waterfowl hunting companion or truffle hunter. But what about before and after the 17th century?

In terms of pre-German influence, the Poodle may have been around in Ancient Rome and Egypt. Indeed, artefacts from this time depict curly-haired Poodle-like dogs. But we don’t know much about this pre-pudel era.

What is well-documented is the wild ride of the Poodle after the 17th century. Apparently the dog caught the eye of King Louis XVI in the 18th century, who introduced the dog into the French aristocracy. Meanwhile, his animal-loving wife, Marie Antoinette was focused on her Pugs, French Papillons and Turkish Angora cats. Either way, the palace was full of pets!

Perhaps because of these fashionable royals, the Poodle became the world’s first pupfluencer. For the next few hundred years, the French would be absolutely enamoured with this pup. It’s really no wonder that they named it the national dog of France!

But, this dog wouldn’t leave the working life behind, completely. Around the same time that Poodles were lounging around Versailles, they were also stealing the show at traveling circuses across Europe. Their specialty was dancing, but they could also perform a number of amusing tricks. Of course, these show-stopping Poodles were dressed up in eye-catching outfits and gloriously groomed—with all sorts of coiffed hair-dos and special distinctive cuts.

Today, there are three official Poodles—Standard, Miniature, and Toy— and a couple of unofficial ones, like the Teacup Poodle and the Klein or Moyen Poodle. And while they may not be the dog of choice for fashionable Parisians anymore, this is still a popular pooch with a huge following!

Not many creatures can balance “regal” and “goofy” quite like the Poodle. When you see one strutting down the street, you might think they’re training for the catwalk. Fast forward five minutes, and they’ll be bounding after a ball like a circus juggler. Their poise make them a sight to behold, but their commitment to fun ensures they don’t take themselves too seriously.

And, this dog is smart as can be. In fact, they’re consistently ranked among the most intelligent dogs in the world. So, if you’re thinking of getting a Poodle, get ready for life with a dog who can predict your every move. They’re experts at picking up on cues, such as when you’re putting on the sweater you only wear to the dog park or lacing up your running shoes instead of your work shoes. And to top it off, they’re curious. If they want to figure out how to open a door or nose their way into the treat drawer, they’ll keep at it until they’ve found the solution. Of course, you can see how these behaviours can be a bit of a challenge, but you’ve got to admire their intelligence!

Luckily, they’re also some of the most loyal doggos out here, so you won’t have to contend with a smart pup who doesn’t care about the rules. Poodles are huge people-pleasers, and they bond strongly with their immediate family. They’re also great family dogs, although their tendency to jump up on people might be inappropriate for smaller children.

With other dogs, animals, and newcomers, they may be a bit standoffish at first, but aggression is not common. That said any dog should be properly socialised at a young age to prevent possessiveness and territorial behaviours. This may be especially true for the Mini and Toy varieties, who may develop Small Dog Syndrome.

Part of what makes this dog rank so highly in intelligence is their penchant for learning. Poodles learn new tricks vastly faster than other breeds, and their loyalty to their owners make training a breeze. It’s part of what makes them such wonderful pets for first time Owners.

While training is relatively easy, it’s also very necessary—even for the little guys! An untrained Poodle will assume they’re the Alpha of your household, and may carry on like a diva.

There are a few things that you can do to make the training process not only fast but also engaging and fun for a Poodle:

No matter the Poodle type, these dogs need exercise! But as you probably guessed, a Standard Poodle’s exercise will look different than a Toy Poodle. So let’s break them up into two groups:

These medium-to-large sized Poodles need at least an hour of exercise every day. And this should include activities that really get them going: fetch, a game of chase with other dogs at the park, swimming, agility training, and similar high-energy activities. These larger pups also enjoy walks, and with a bit of training, can do very well on a lead.

They may be pint-sized but they’ve got the energy of a much larger dog! The Mini and Toy version of the Poodle doesn’t need quite as much running and playing time as their larger counterparts, but you should still schedule in about a half hour of high-energy play. They’ll also enjoy some time for gentle walking.

One thing to keep in mind about the Poodle is that they are an energetic breed with a love for life. That means overexertion can be an issue. They’ll just keep chasing that ball until they drop. So, make sure that they get some rest breaks and plenty of water.

Another thing to remember is that this doggo loves to be around humans above all else. They’ll be much happier going for a jog with you or accompanying their friendly Dog Walker around the block than being left on their own to play in the backyard.

And, even with a good amount of daily exercise, this dog is going to need some mental stimulation from their living conditions. Providing them with plenty of toys and quality time with their favourite humans will round out their exercise and mental stimulation needs.

In terms of space and setting, you can pick the Poodle that is best-suited for your home and lifestyle. A Standard Poodle isn’t likely to be very happy in a cramped apartment, and a Toy Poodle may not appreciate a home with too many stairs. All varieties are pretty adaptable, as long as they get their daily dose of exercise and attention.

For many, the Poodle’s claim to fame is the fact that it doesn’t shed any hair. This is a boon not only for people allergic to dog hair, but for those who hate sweeping it up. Of course, as they don’t shed, you’ll need to trim your pooch every three to six weeks. Professional dog groomers can attend to this, but you can also give it a shot if you’re feeling bold.

As far as styling goes, your Poodle isn’t picky, and you can have fun with the many different cuts to choose from. Poodles will proudly show off the quintessential Continental cut with the pom poms and the bracelets. Or, you can keep it simple with the classic Puppy cut.

We’re particularly partial to the mid-length Teddy Bear cut, which will transform any Poodle into an adorable round bear.

Whichever style you choose, make sure to brush your Poodles coat regularly to work out any tangles. And tend to those toenails, teeth, and ears to maintain good hygiene.

Even with the many spikes in popularity over the last few hundred years, the Poodle has been able to maintain good genes and few health problems. They’ve got a good, long life expectancy, with the smaller pups reaching an average of 15 years!

There are a few health conditions that do pop up in this breed, so Owners should be aware of:

Like all dogs, Poodles benefit from a healthy lifestyle and proper diet. Because this is such an active breed, they need highly-nutritious foods to keep them going and prevent injury. Mad Paws Dinner Bowl is an excellent way of fuelling this active doggo with human-grade, fresh ingredients.

Back in the 1980s, one group of Poodles proved once and for all that they’re not just pretty hair-dos and fancy tricks. These dogs can compete in the world’s toughest canine competition: the Iditarod.

Okay, okay, these dogs never won first place, and they were eventually banned because of concerns about their lack of furry insulation. But, while they competed, they did well enough to impress the naysayers. And they proved that these pups are up for any challenge.

Final Thoughts on the Poodle

Smart, silly, and sophisticated, it’s no wonder that the Poodle has captured the hearts of so many generations of dog lovers. And what a wild ride their history has been! From hunting companions to circus performers to permanent residents at Versailles, these dogs have worn many hats.

As quick learners and devoted pets, these dogs are wonderful for first time Dog Owners. Just make sure that they get a good amount of exercise and a healthy diet, and they’ll give you years of love and loyalty.

How to Stop Your Dog from Pulling on Their Lead

Do You Leave Your Dog Outside While Shopping?