Royal, ancient, supremely elegant – meet the Turkish Angora. Our trusted Pet Sitters in the Gold Coast, Perth, Bendigo, and everywhere in between know all about how to take care of the unique feline. 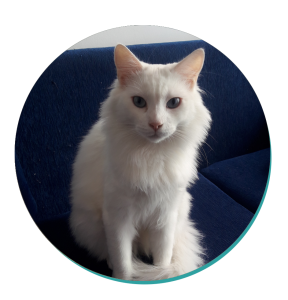 Although there are many plausible origin stories for the Turkish Angora, everyone agrees that this is an old breed. One of the most famous legends of this beloved cat dates back to the founder of Islam, Mohammed, who loved his Turkish Angora so much that he would rather cut off the sleeve of his robe than disturb his sleeping cat.

While we don’t know just how old this breed is, we can be fairly certain that these cats originated in the region of Turkey. There, in the hard-to-reach mountains, they were isolated from much of the rest of the world. The result of this isolated inbreeding was an all-white, medium-to-long silky haired cat with blue or amber eyes.

Cat lovers brought Angoras to the Americas at the end of the 18th century, where they gained worldwide popularity. Most of the world’s Turkish Angoras descend from this strain, as Turkey developed stricter regulations around the breed. Today, white Turkish Angoras are cherished in Turkey, existing only in zoos and a few private breeders.

One word that you wouldn’t use to describe a Turkish Angora is “mild”. They are a high-energy, highly intelligent, and highly affectionate breed. They want to be part of the action at all times, and will play with anything to get their Owner’s attention. As such, it pays to keep some cheap, DIY cat toys on hand at all times.

Once you’ve bonded with a Turkish Angora, there’s no going back. Generally speaking, this cat is determined, persistent, and loveable, and will make themselves at home in any family setting. That said, Angoras don’t generally feel comfortable when humans pick them up or restrain them in any way. Indeed, their constant need for movement and play means that they’ll only look for affection on their terms.

Unlike their close relatives, the Turkish Van, Turkish Angoras are a bit more hesitant around water. You may find that your Angora will dive right in, but don’t panic if they’re standoffish instead.

Because Turkish Angoras often have blue eyes or blue and amber eyes, they are prone to deafness. Other than that, the Angora is quite a healthy breed – provided they descend from responsible breeding practices. This breed also does have a small likelihood of hypertrophic cardiomyopathy.

When it comes to grooming, a Turkish Angora requires less maintenance than you would expect. They have a semi-long silky coat, without the matting-prone undercoat. A weekly brushing and monthly bath is enough to keep the Turkish Angora nice and beautiful.

Turkish Angoras were a favourite for the French monarch Marie Antoinette. Before the French Revolution, she arranged for her six beloved Angoras to travel to America with her. As grim fate would have it, the cats made the voyage without their Owner.

Spring Dangers for Your Dog

7 Dog Breeds that Don’t Bark Much