Lion hunter or cuddly canine companion? In this Dog Breed Corner, we’ll take a closer look at the Rhodesian Ridgeback! 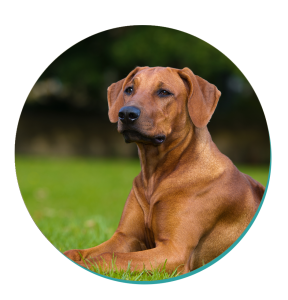 The first date you tend to see associated with the Rhodesian Ridgeback is the 16th century, when Dutch settlers first arrived at the shores of South Africa with European dogs at their side. But the truth is, this dog’s history spans much farther back in time.

Long before European settlement, the Khoikhoi people enjoyed the company of the Africanis dog, a smart, people-oriented canine with incredible speed and hunting skills. These dogs can be traced back several thousand years and were never bred for looks, although many carry the genetic furry ridge along their back.

When European settlers arrived with their own breeds, they realized that their dogs struggled with the terrain, lack of water, wildlife encounters, and intense sunshine. So, they crossed their Greyhounds, Great Danes, Bloodhounds, and Mastiffs with the Africanis dog to create a more adaptable breed: the African Lion Hound.

True to the name, this new breed developed a reputation as a fearless lion hunter. Although our hearts sink today to think about the killing of such beautiful and important wild animals, early settlers knew their livestock stood no chance with the powerful predators around. So, with speed, quick-thinking, and almost absurd bravery, the early Rhodesian Ridgebacks were tasked with tracking down and cornering the huge felines. The dogs never actually came into contact with those sharp claws and teeth, but rather kept the lions preoccupied until their Owner arrived.

While they are placed in the hound group, these dogs have always been much more than just trackers and trappers. In their early farm days, they were used to scare off baboons, retrieve small game, accompany their Owners on the daily farm rounds, and sometimes herd livestock.

By the end of the 19th century, the dogs became highly sought after in modern day Zimbabwe, formerly known as Rhodesia. In 1922, the first formal breed standard was written for the Rhodesian Ridgeback, and the versatile pup started to gain attention from other dog-loving countries. Their acceptance as family pets came just in time for big game hunting to go out of practice. And, we’d say they’re probably happy to give up the name of African Lion Hound.

The Ridgeback personality is unique, endearing, and at times, challenging.

For one thing, these dogs are natural protectors and will make sure that their family members are safe at all times. Their default mode is silent, but Ridgebacks will make themselves heard if they feel their household is in danger. Don’t expect this dog to lay out the welcome mat for your houseguests! As true guard dogs, they may take a while to warm up to your visiting friends and relatives.

Ridgebacks are self-assured and somewhat stubborn dogs who know exactly what they want: to be at their beloved Owner’s side. It can be difficult to convince them to stay calm on their own. So, special training or the help of a dedicated Pet Sitter is recommended to prevent separation anxiety.

In general, these dogs are friendly with other dogs, but that might not be the case between males of a similar age. Special socialisation is usually necessary to decrease canine-directed aggression. And when it comes to cats and other small animals, these dogs can learn to coexist peacefully in the right conditions. They need to be properly introduced and taught how to behave around small animals.

Same goes with children. The Rhodesian Ridgeback has the potential to be a great family pet, especially for households with energetic older children. But, it’s important to teach everyone about proper boundaries to make sure that roughhousing doesn’t get out of hand.

If there’s one thing that many Ridgeback Owners will tell you, it’s that these dogs are lovably quirky. With an independent spirit and more than a little bit of stubbornness, they like things to be their way. And while their humorous antics will keep a smile on your face, there will also be times that you’ll need to keep your cool as this clever pup tries to rewrite the rule book.

Ridgebacks may no longer be roaming the countryside looking for large felines to fight. But, some of the personality traits that have been passed down from the old days make this dog better suited for experienced Dog Owners.

These dogs have the intelligence and work ethic of a traditional farm dog. But they also have the tracking skills and laser-focus of a hound. So, what does that mean for this breed’s trainability?

It means that with the right training structure, training a smart dog like this one will be a breeze. Without it, though, these dogs will likely find more enjoyable ways to spend their time. Here are a few ways to create the perfect training regimen for the Rhodesian Ridgeback:

It’s not too often that we recommend two hours of daily exercise for a dog breed, but when it comes to the Rhodesian Ridgeback, that’s just the minimum! These dogs are highly active, and need a variety of different kinds of exercise to stay healthy and happy. Here are a few ideas:

A proper diet is essential for any dog who spends the majority of their time in motion. Make sure this pup gets a balanced bowl of kibble that will promote healthy activity and recovery.

As far as living conditions go, Owners may need to Ridgeback-proof a few things around the house. With their great sense of smell, high intelligence, and strength, you might find them on the kitchen counters or finding their way into the treat drawer. Digging and other destructive behaviours may arise for an under-exercised Rhodesian Ridgeback.

Another curious remnant of this dog’s past is their ability to climb. Whether they’re scaling trees in pursuit of a small animal or hopping the fence to chase their beloved Owner on their way to work, these dogs are incredibly powerful and determined. Make sure that outdoor spaces are outfitted with a dog-proof fence.

Finally, these dogs are best-suited for warm climates, so they may need some doggy winter wear on cold days.

​A Ridgeback’s coat is a single, short layer of dense fur that comes with a moderate amount of shedding and very low grooming needs.

They should be brushed about once a week to remove loose fur, with a brush that won’t irritate their skin. Remember that the distinctive ridge on their spine is a cowlick, so take special care to brush in the direction of the hair growth to prevent irritation while grooming.

In terms of washing, these puppers are generally very clean and won’t carry around a doggy smell. Washing them about once every three months or whenever they roll around in something questionable is plenty.

Beyond coat care, these dogs should have their teeth brushed, ears checked, and nails trimmed regularly. Make sure that their dew claws are short so that they don’t get caught in underbrush during outdoor adventures.

When it comes to genetic health, these dogs don’t suffer from almost any inheritable diseases. That said, Owners should be aware of:

For a highly active dog like a Ridgie, you’ll want to make sure they’re fully covered by a pet insurance plan to keep them on the move no matter what health concerns pop up!

You see a doggo in the distance that looks like it could be a Rhodesian Ridgeback. It’s the typical wheaten colour, with a black face, and mischievous, intelligent eyes. But one thing is missing: the ridge!

In fact, not all dogs in this breed have the instantly recognisable ridge along their spine. Every once in a while, the dominant ridge gene isn’t passed on to the next generation. They’re still Rhodesian Ridgebacks in every way you can think of, but these ridgeless ridgies are often disqualified from conformation trials.

Final Thoughts on the Rhodesian Ridgeback

Powerful, loyal, and intelligent to no end, the Rhodesian Ridgeback is one unique pup! They’ve come a long way from their days of protecting their herd from the likes of lions and baboons. But they’ve maintained an independent spirit and impressive athleticism that sets them apart from many other dog breeds.

If you’re able to give this dog enough exercise, training, and socialisation, you’ll have a trusted guard dog, smart companion, and at the end of the day, peaceful cuddle partner. The Rhodesian Ridgeback is not a dog for first time Owners, but once you have one, you’ll never want to be without this amazing breed.