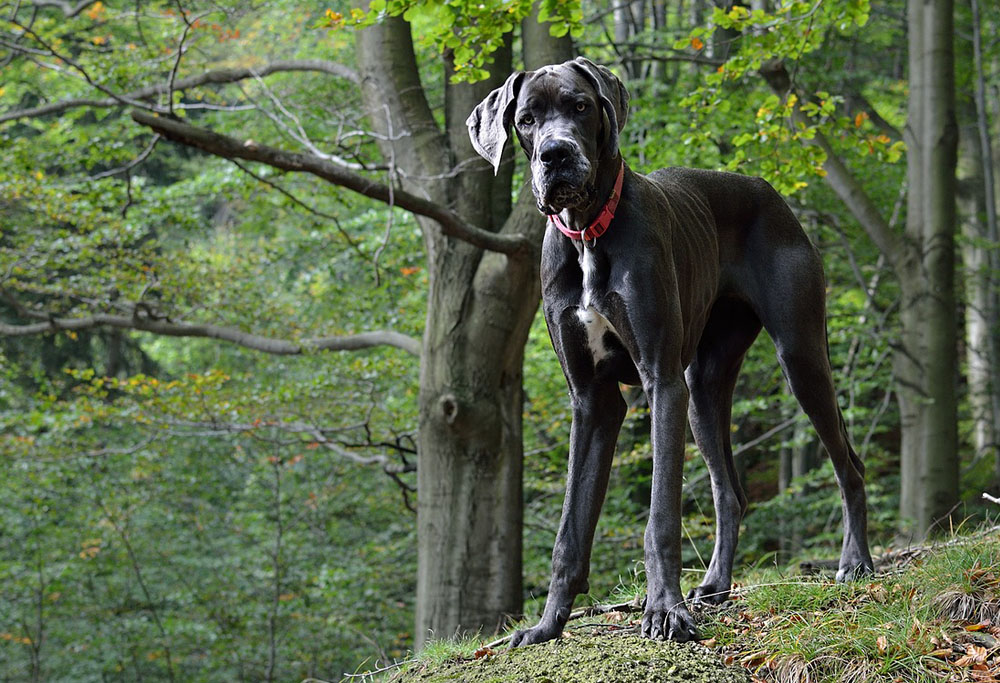 These gentle giants turn heads wherever they go. The Great Dane takes centre stage in this Dog Breed Corner! Looking for a Pet Sitter who can care for your super-sized Great Dane? Mad Paws has quality Dog Boarders in Sydney, Perth, Darwin, and everywhere else in Oz! 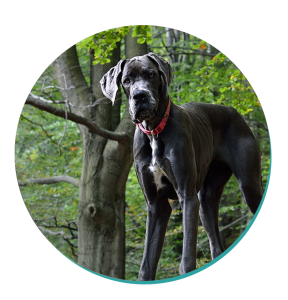 When it comes to the Great Dane, there are a lot of misconceptions to clear up.

Some have to do with personality, and we’ll get to that in the next section. But one of the most puzzling errors is the name, which suggests that these large dogs are originally from Denmark. In reality, Great Danes come from Germany, and they’ve called that region home for over 400 years. So how did the mixup happen?

Well, it’s a bit of a mystery. Over the course of their history, Great Danes have enjoyed more appropriate names, from German Mastiff to Boar Hound to simply German Dog. But, as these dogs became more popular, spreading to other regions, it’s possible that their true origin got lost in the mix. The name Great Dane caught hold, despite the efforts of the German dog fanciers originally responsible for developing the breed. In fact, in 1880, German breeders attempted to ban the incorrect name entirely and replace it with the true title: Deutsche Dogge. Their efforts were unsuccessful. And by the time that the breed was ready for recognition by international kennel clubs, this German breed was officially named the Great Dane.

To be sure, the dogs themselves were never preoccupied with the misnomer. They were too busy dedicating themselves to what they were bred for: boar hunting. These impressively large dogs, probably the offspring of Irish Wolfhounds and Mastiffs, were popular with wealthy families and royalty. Owning one wasn’t just a status symbol, but also a way to protect their expansive properties—no one was likely to intrude with these massive dogs around!

Despite their intimidating looks, it soon became evident that the Great Dane was really a gentle giant at heart. Perhaps because of their gentle demeanour once the hunt was over, Owners of the breed began to see these dogs as even better companions than hunting dogs. Eventually, all of the aggression was bred out of this massive breed, and Great Danes made the transition into the homes of dog lovers across Europe and the rest of the world.

Despite their “tough guy” look, the Great Dane is a big, cuddly lap dog. They happily fall into what’s called the “velcro dog” group: wherever you go, your Great Dane is sure to follow.

These dogs get along well with children, and even though they tower over toddlers, tend to be quite gentle and careful around the little ones. And while these dogs aren’t overly rambunctious themselves, they seem to enjoy the company of young children.

With proper socialisation, Great Danes are equally good with other dogs, too. Despite their huge stature, you’re likely to see Great Dane Owners with more than one! That’s because they love company, especially that of other Great Danes. In fact, these dogs are prone to separation anxiety. Without a canine friend at home or the attention of their beloved Owner, they can develop a howling tendency or take out their frustrations on your home. If they’ll be home alone, it’s best to leave them in the care of a doting Pet Sitter.

With their background as guard dogs, Great Danes aren’t afraid of using that powerful bark to ward off strangers. Once they see that a houseguest is a friend of their Owner’s they typically warm up quickly. But it’s a good idea to warn your friends and family ahead of time that your dog’s bark can be startling!

But, even with their intimidation tactics, Great Danes have a few quirky fears of their own. Owners reveal that their puppers are afraid of some of the most surprising things, from hat-wearing strangers, to silly squeaky toys, to household appliances. Some are even intimidated by small dogs! It’s not clear why these big doggos are so wary of unfamiliar items, but it probably harks back to their guard dog hyperawareness.

With a dog as big as this one, training is a top priority. So it’s a good thing that they’re fairly easy to train! Great Danes are people-oriented and food-motivated, making them excellent subjects for your training sessions.

The first thing you’ll want to focus on are basic commands. Without them, you’ll never be able to control this powerful pup, no matter if they’re on a leash. So, spend lots of time on the basics: sit, stay, heel, down and basic recall. That way, you’ll have a good handle on a dog that can easily beat you in a pulling contest.

Basic training will come in handy for another reason. The fact is, because these dogs are so large, they tend to elicit fear in people who are nervous around dogs. You certainly don’t want a giant canine invading the personal space of someone who is terrified of dogs, so maintaining control over your pup is crucial.

And, in some scenarios, Great Danes can pick up that nervousness and become agitated themselves, going into protection mode. For this reason, socialisation is incredibly important so that your pup can maintain a calm demeanour even around untrusting strangers.

Beyond these high-stakes situations, training is enjoyable for a dog like the Great Dane. Since they’re not too playful or energetic, training is one of the best ways to offer them some mental stimulation. Here are a few things to remember when training a Great Dane:

While Great Danes are somewhat playful, and a bit goofy, they’re not necessarily the athletic type. So, it can be a bit of a challenge to find the right way to keep them healthy.

The best way to exercise this big dog is by walking, and we mean a lot of walking! Great Danes need about an hour of exercise per day to stay healthy, so make sure to invest in a good pair of walking shoes for yourself.

Of course, you don’t have to do it all alone. With the help of a dedicated Dog Walker, your Great Dane can get the right amount of exercise.

Other ideas to increase a Great Dane’s activity levels could include games of fetch and playtime with other dogs. And, while they’re not excellent swimmers, many Great Danes enjoy splashing around in lakes and at the beach.

Having a backyard is, of course, always a plus. But unless your yard is large enough for a few long laps, you’ll still want to get your gentle giants out of the house to stroll the block or go to the dog park.

These big couch potatoes don’t need a whole lot in terms of their living conditions. That said, your life will be a lot easier if you give them enough space to move around comfortably. An excited Great Dane can be a bit of a bulldozer, after all.

Something else to know about the Great Dane is that they have a tendency to drool. While drooling is normal with this breed, Owners may want to keep cleaning rags around the house to manage the slobber.

Great Danes sport a short, smooth coat that doesn’t require extensive grooming. But, there are a few ways to keep their skin healthy and their shedding under control.

The first is with occasional bathing. Wrangling this big dog into the bathtub may not be the easiest task, but it should be done about once every six weeks.

And, while Great Danes aren’t known for heavy shedding, it’s still a good idea to brush them regularly with a grooming mitt or slicker brush to keep your home clean. Beyond that, grooming a Great Dane includes the basics: regular nail trimming, checking their ears for infection, and tooth brushing.

As wonderful as it is to own a Great Dane, it’s important to acknowledge their short lifespans. According to PetHelpful, only 17% of Great Danes make it past 10 years old. Some of this may be due to genetic problems common in large breed dogs, such as hip dysplasia, cardiomyopathy, and thyroid issues.

Another huge risk for Great Danes is bloat, a condition in which gas accumulation in the digestive system creates a life-threatening situation. Unfortunately, there’s no sure-fire way to prevent bloat in deep-chested dogs like the Great Dane. However, one suggestion that does seem to lower the risk includes feeding your doggo several smaller meals throughout the day instead of two large ones.

Something else to know about Great Danes is that they grow amazingly fast. At 6 weeks, you bring home a little bundle of puppy that weighs about 4kg. Within 12 months, you’ve got a dog that can tower over you on their hind legs! It seems like every time you blink, your Great Dane puppy has grown a couple of centimetres – at least! As such, getting this dog on a healthy diet is incredibly important. In order for them to develop normally, make sure that they get nutritious, balanced dog meals!

Fun Fact about the Great Dane  ♥

Here at Mad Paws, we love a story about life-saving doggos. But Great Dane Juliana’s claim to fame might be the wildest one yet!

In the middle of the night in 1941, UK-borne Juliana, a fawn-coloured Great Dane, woke to a terrifying scene: a bomb had come crashing through her home. Perhaps not knowing what else to do (or maybe mistaking it for a fire hydrant), the giant dog peed on the WWII weapon.

As it turns out, Juliana’s defiance of her potty training was life-saving. She effectively defused the bomb and saved the entire building.

Juliana’s efforts were recognised with a Blue Cross medal, the first of two that the amazing pup would win in her lifetime.

Juliana went on to win her second medal for getting help when her beloved Owner’s shoe shop caught fire. Clearly, Juliana wasn’t afraid to make a mess, or a scene, if it meant protecting her family!

Fun Fact about the Great Dane

The one thing that everyone knows about Great Danes is that they’re big dogs. But there’s so much more that makes this dog breed unique.

For one thing, these dogs may look intimidating, but they’re gentle by design. Careful breeding has turned this former hunter into a friendly, patient, easy-going pup who will get along with everyone. In fact, they’re prone to separation anxiety so they’d prefer their Owners to be around as much as possible.

Though surprising for their size, some Great Danes can be a bit nervous, with newcomers and also with unknown objects, so take care to properly socialise them and help them build confidence. Training is also non-negotiable with a dog of this size.

And, while their lifespan is tragically short, these dogs have so much love and affection to give. Make room on your couch for this huge lapdog and you’ll see why the Great Dane is such a popular family pet!

Should You Let Strangers Pet Your Dog?

Meet Tracey, Our June Pet Sitter of the Month

Fantastic blog…This is really an awesome blog.Thanks for sharing such a great information with us.Good job.Keep it up.