This cat defies expectations! Meet the Turkish Van, aka the swimming cat, in this Cat Breed Corner. Looking for a Cat Sitter in Adelaide, Sydney, or any other Aussie locale? Mad Paws won’t let you down! 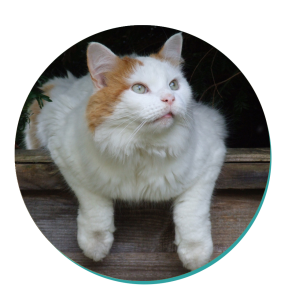 Lifespan – 12 – 18 years (these kitties have a slow maturity rate, coming to full maturity at 3 years old)

As you can probably guess from the name, Turkish Vans come from Turkey. They developed in the Lake Van region, which is isolated and mountainous, where they developed a love of water.

The Turkish Van is an old breed that has often been the subject of legends and fables. These kitties have developed separately from the rest of the world for many years. Some of them were taken to Europe in the 13th century; however, it wasn’t until about 1950 that the breed became recognized on a global scale.

Today, the Turkish Van is a protected breed in Turkey. Although Turkey has a meticulous and careful breeding program, very few of these cats are allowed to leave the country. If you’ve come in contact with a Van, chances are, it’s from Europe.

There are few cat personalities like the Turkish Van. They are energetic, playful, and extremely curious. This cat loves to run around the house, enticing everyone to play with cat toys. One of the interesting things about the Turkish Van is that they love water. With their water-resistant coat and playful personality, you’ll often find Turkish Vans splashing around in the sink or trying to climb into the shower with you.

Training a Van is also possible – if you’ve got the patience. They love to be around people, so you shouldn’t have any issues in engagement. The trick will be to channel their energy into training by making it into a game.

One of the first things you notice about a Turkish Van is their luxurious coat. They have a water-resistant, silky coat that doesn’t generally mat or tangle. You might bring out the brush for some bonding time, but you won’t have to fuss much over-grooming. The Turkish Van is a generally healthy breed. The only thing to watch out for is deafness in Turkish Vans. The breed itself isn’t predisposed to deafness but the high likelihood of blue eyes in Turkish Vans increases the risk. If you’re unsure, err on the side of caution and consult your local vet care professional.

Cats come in all colours and patterns, and the Van Pattern is one of them. The Van’s colourings are so distinctive – a white body with colouring only on the ears and tail – that breeders have adopted the name to describe the pattern in all breeds.

Meet Olivia, Our August Pet Sitter of the Month

Why Do Dogs Eat Their Own Poop?