Just one look into this pup’s eyes is all you need to fall head over heels! Throughout this Dog Breed Corner, you’ll discover all you need to know about the Bernedoodle. Do you own a Bernedoodle that needs some TLC while you’re away? Through Mad Paws, you can find some of the best Dog Minders in Australia! 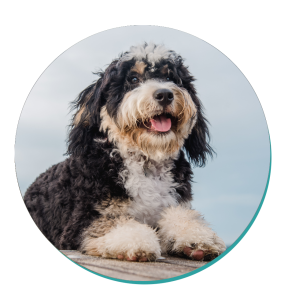 The Bernedoodle, an adorable mix of Bernese Mountain Dog and Poodle, has probably existed by chance for a long time. After all, mixed breed dogs are quite common all over the world. But in 2003, the official Bernedoodle breed was born in Canada by breeder Sherry Rupke.

At the time, Sherry was breeding Golden Labradoodles and Bernese Mountain Dogs separately. While she was satisfied with happy, healthy Labradoodles coming out of her breeding program, she couldn’t help but notice the tragically short life spans of her Bernese Mountain Dogs. These purebred beauties are often plagued with a variety of genetic health disorders, and Sherry’s dogs were no exception.

If the Golden Labradoodle could be such a success, she thought, why not try breeding the Bernese Mountain Dog with the Poodle, too? The result was a healthy – not to mention, adorable – litter of puppies that would start the formal breeding program for Bernedoodles.

Today, Bernedoodles are becoming popular all over the world. We’ll probably see more of these pups bounding around our local dog parks in the years to come.

Bernedoodles are happy-go-lucky, goofy, loveable doggos. They tend to keep a smile on their Owner’s faces at all times, and they just want to be involved in whatever the family is doing. This is an ideal dog for first-time owners and large families, as the Bernedoodle is a social and friendly dog. They get along great with other animals and children, too.
Of course, with a dog as loving and cuddly as the Bernedoodle, they’ll be happiest in a setting where they get plenty of attention. For families that spend a lot of time away from home, the best options are to bring the pup along or find an expert Dog Sitter.

One other thing to keep in mind when it comes to Bernedoodles is that it’s hard to know whether their personality will be mostly Bernese Mountain Dog or mostly Poodle. In the former case, you’ll have a dog that is easy-going and sometimes shy or timid around strangers. If the Poodle genes take over, you’ll have a doggo that is confident and intelligent with a bit of a stubborn streak.

You might have personality differences when it comes to the smaller Bernedoodles, as well. The tinier the Bernedoodle, the more that stubborn streak tends to reveal itself. But don’t worry, you can check out our article on Small Dog Syndrome to help counter some of those behaviours in your mini or toy Bernedoodle.

With early socialisation, these dogs do not generally show negative traits such as aggression, possessiveness or a high work or prey drive. Instead, they tend to be calm companions. Kick your feet up and invite your Bernedoodle to cuddle up and you’ve got the dog of your dreams.

An eager-to-please and intelligent dog like the Bernedoodle is a joy to train. But don’t take their gentle demeanor as an invitation to forgo training altogether. They are playful and can be a bit domineering, so it’s important to teach them the rules of the household early on.

There’s another advantage to training, too – it stimulates the Bernedoodle’s intelligence. Without these mental challenges, you might see a dog with frustration and pent-up energy.

The best way to approach training with a Bernedoodle is to make it fun and get everyone in the family involved. Obviously, you don’t want seven family members shouting at once, but instead, make sure that every member has some training time with the pup. That way, your Bernedoodle will know their place in the household and have a chance to bond with each member of the family.

And remember to balance sternness with praise when training a Bernedoodle. Like their Bernese Mountain Dog parent, these pups have a sensitive side.

If you follow our blog, you’ve probably heard us say before that all dogs need exercise. And the Bernedoodle is no different. Bernese Mountain Dogs were once working animals, and Poodles are full of playful energy, so it’s no surprise that the Bernedoodle needs daily outdoor exercise, too.

Just how much exercise your Bernedoodle needs will depend on their size, with the toy versions needing slightly less than the standard. But all can benefit from a daily walk to explore the neighbourhood and socialise with other doggos.

It’s also important for your Bernedoodle to have designated playtime. While some pups are perfectly content with a long stroll or jog, the Bernadoodle is a goofy, playful doggo. They’ll have much more fun playing ball and tug-o-war than they would walking around sniffing bushes (not that they’ll say no to that, though!). And keep in mind that your Bernedoodle will expect your full participation. They’ll prance around and try to grab your attention until the whole family is involved in the game.

If you’re looking for some fun indoor games to shake things up and supplement your outdoor adventures, make sure to check out our article on How to Exercise Your Dog Indoors.

Unlike their mountain-dwelling parent, the Bernedoodle is much better adapted to a variety of living conditions. They get on well in apartments and they’ll also be happy with wide open spaces. With their hybrid coat, the heat won’t affect them as much as it would with a Bernese Mountain Dog, but they’re also happy to live in cooler climates, too.

If you have a backyard, your Bernedoodle will happily frolic around and spend as much time outside as possible. But, more importantly, they’ll want a space on the couch so that they can cuddle up with their loving Owners. Anything goes, is what we’re getting at here. As long as your Bernedoodle gets plenty of exercise and attention, they’ll be happy in any setting.
If you have a standard Bernedoodle, one thing you might consider is widening the walkways in your home. Bernedoodles are graceful but their playfulness makes them accident-prone, as well.

The Bernedoodle breed has a few different coat variations, but good news! They’re all pretty easy to manage, and some are even hypoallergenic.

One one end of the spectrum, your Bernedoodle will have curly hair very close to the Poodle coat. This coat variation sheds very little, but does need to be brushed regularly and clipped about once every two or three months.

On the other end of the spectrum, you’ll have Bernedoodles with wavy or almost straight hair. This variation is rare and will lead to more shedding. Even for people with allergies, a wavy-haired Bernedoodle generally won’t have much dander to speak of.

When a Bernedoodle is a few weeks old, the breeder can generally recognise what kind of coat the doggies will have. If you have allergies or worry about excessive shedding, make sure to opt for the pup with the Poodle-like coat.

And how about bathing? Well, experts say, don’t go overboard with Bernedoodles. Frequent bathing can strip them of their natural oils which will lead to irritation. Once every three to four months is the perfect amount of bathing for these pups. Even if you have a Bernedoodle that loves rolling around in the mud and dirt, resist the urge to overbathe. Simply wait for them to dry and then brush out as much of the dirt as possible. At the most, you can bathe your Bernedoodle every two or two and a half months. And to learn more about bathing practices, check out our article on How to Bathe Your Dog.

When Sherry first started to breed Bernedoodles, health was her primary concern. In fact, eliminating some of the genetic problems was one of the reasons she started the breeding program for hybrid dogs. And what she found was that the Bernedoodle puppies tend to be much healthier than their parents. In general, hybrids are healthier dogs and less prone to genetic disorders. It makes sense, also, that the Australian Bernedoodle, taking from three gene pools, would be healthier still.
That said, it’s important to find breeders who take genetic testing as seriously as Sherry’s breeding program. And even with meticulous breeding practices, Bernedoodles can still be prone to a few different health issues:

Considering how recent this breed came into being, it’s important to note that we may learn more about the health of this breed over the next few generations. As with any doggo, it’s crucial to obtain the input of a vet early on, stay current on vaccinations, buy high-quality food, and give them plenty of exercise.

Fun Fact about the Bernedoodle ♥

Alright you breeding experts, you’re going to love this one! Our fun fact for the Bernedoodle is a look at the breakdown of this doggo’s breeding categorisation (it’s interesting, we promise!) When you start looking for the Bernedoodle of your dreams, you’ll be posed with three choices: F1, F1b, and F2. What could this possibly mean?

F1 is a first generation Bernedoodle. That means this pup came from a purebred Bernese Mountain Dog mom and a purebred Poodle dad or vice versa. This is the healthiest cross, but may be more unpredictable when it comes to coat type, personality, and trainability.

F1b is the result of an F1 Bernedoodle mixed with a Poodle. That makes them 75% Poodle and 25% Bernese Mountain Dog. If you’re looking for a dog that is mostly Poodle, this is the mix for you.

And finally, we have the F2 Bernedoodles. They are the puppies from two F1 Bernedoodle parents. The advantages to this breeding line is consistency in the breed, but the drawbacks are health issues. After all, it’s likely the mixing of two breeds that leads to better health outcomes, and the lack of diversity here could be a concern.

Some Final Thoughts on the Bernedoodle

This breed is everything you could want in a dog. They’re affectionate, social, intelligent and playful. When you add those great personality traits to the Bernedoodle’s adorable looks and lamb-soft coat, you really couldn’t ask for more.

We mentioned that this is the perfect dog for families or households with other animals. A caveat here, though: the Bernedoodle will not be happy in the background. If they don’t get the proper amount of attention or playtime, they’re likely to become unhappy and act out.

When it comes to temperament, there are a lot of variables here. The Bernedoodle comes in three different sizes, there are three different generations available, and every doggo is unique. Because of that, it can be difficult to say definitively that your Bernedoodle will easygoing or graceful or good with children. It’s important to spend time with a Bernedoodle and get to know the breeding practices before you adopt your new pup.

But, when you bring home that ball of curly fluff, you’re going to be so glad that you chose this special breed for your family!

Meet Kate, Our September Pet Sitter of the Month