Since they were first discovered in 1950, the world has fallen in love with the Cornish Rex! Learn more about this curly-coated cat’s history, trainability, and grooming needs. Is your Cornish Rex yearning for some primo pet care? Mad Paws can connect you to Cat Sitters in Melbourne, Perth, Adelaide, and all ’round Australia! 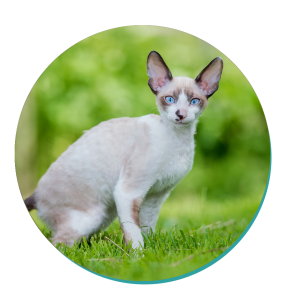 Every once in a while, a random genetic mutation gives the world a whole new cat to love. And, that’s exactly what happened when, in July of 1950 on a farm in Cornwall, England, a single curly-haired cat was born. This special kitten’s littermates were all straight-haired cats, as was his mother, Serena.

Instantly, Serena’s Owner, Nina Ennismore, knew that the little guy was something special. She decided to take him inside and make him a family pet named Kallibunker. As many responsible Pet Owners do, Nina took Kallibunker to the local vet for a check-up and appointment to be neutered. But, the vet advised that Nina consult with a cat geneticist to learn more about this amazing curly-haired mutation before neutering him. After all, this could be the start of a brand new cat breed.

As it turns out, Killibunker really was the first of the Cornish Rex breed that we know and love today. Over the next few decades, Killibunker would produce multiple litters, gradually increasing the number of cats with the recessive gene. Breeding programs were established in the US which were even more successful than the ones back in England, which struggled to overcome blunders and challenges. You may notice some slight differences between American and English Cornish Rex, as cat fanciers on either side of the pond disagreed on their preferred coat qualities. American Cornish Rex Owners prefer distinct waves, while English Owners would rather have a Cornish Rex with the softest fur possible.

But, even with the delays and disagreements, the Cornish Rex was ready to be registered with the Cat Fanciers’ Association (CFA) by 1962. Today, they are a common breed around the world, often appearing in competitions.

Cornish Rex cats may be known for their unique coat, but it’s their personalities that make them a truly wonderful companion.

It’s a good thing that the original Cornish Rex Owner decided to bring her Killibunker inside because these cats love their humans. They are not likely to understand the concept of personal space, and don’t even think about shutting them out of the room for your work video calls. They’ll do anything to stay at your side, even if it means scratching and meowing at the door until you let them back in.

No matter what you’re doing around the house, you can bet your Cornish Rex is tracking, and following, your every move. These alert cats never want to miss out on the action!

Cornish Rex cats get along swimmingly with children, especially those old enough to keep up with their playfulness. Some prefer to be the only animals at home, but many enjoy the company of other cats and even dogs.

Because of their high level of intelligence, it’s important not to underestimate this feline! They’ve even earned the nickname “Con Artists in Fur,” thanks to their clever problem-solving skills. It’s best to give this cat plenty of playtime and mental stimulation so that boredom doesn’t get the better of them. Otherwise, you’ll have a persistent trouble-making cat on your hands.

If you love kittens, you’re in luck with a Cornish Rex. These cats stay kitten-like for the majority of their lives. It’s brilliant if you want an active, alert, and entertaining cat. But, if you’re looking for a tranquil lap cat, the Cornish Rex may not be the right feline for the job.

As you’ve probably concluded already, “kitten-like,” “alert,” and “persistent” are all code-words for high energy.

Cornish Rex cats are active cats with an astounding amount of grace and agility. At first, you may gasp to see them soaring from ledge to ledge and literally bouncing off the walls. But, it’s just part of their nature. Over time, you’ll also become more comfortable in their acrobatic moves.

Still, with a cat as active as this one, it’s a good idea to prepare for any accidents with a dependable pet insurance plan. If your always-moving Cornish Rex does have a spill, it will be a huge relief to have their vet visits taken care of.

In order to help reign in their high energy levels, you’ll want to have a playtime plan. Expect to spend about thirty minutes to an hour engaging this cat in play daily. All cats are sprinters rather than endurance athletes, so you should break up their playtime into shorter bursts.

Some Cornish Rex Owners also find that leashed or supervised outdoor time is a great way to tire out this endlessly energetic cat. Leaving them in the care of an engaged Pet Sitter is another good way to keep this playful cat entertained while you’re away.

With a high energy cat like the Cornish Rex, training can seem like an impossible task. But in reality, these cats are primed for training!

For one thing, they’re food motivated and intelligent, so they’ll respond well to Positive Reinforcement Training. And, they love their humans, so they’re always looking for the opportunity to vie for attention. Finally, their high energy may actually be a benefit rather than a barrier to training. These cats are always looking for a game, and will jump at the chance to learn quicker than a lounging lap cat.

So, how can you go about training a Cornish Rex? Here are a few ideas:

If you can fulfill this cat’s exercise and mental stimulation needs, your home will be safer from Cornish Rex destruction. But, just like all cats, this one has a few living condition requirements of their own that will keep them happy:

While this cat has a wonderful personality, the breed may never have existed if not for that unique curly coat. So, let’s take a closer look at those luxurious locks and how to care for them.

At first glance, a Cornish Rex may look rough, but they actually have incredibly soft, silky fur. This is because the breed lacks guard hairs, the water-resistant, outer fur that most cats have. This is also the reason why these cats aren’t great with temperature regulation. On one hand, they’re not as vulnerable to cold as hairless cats. On the other, they’re not as comfortable in chilly weather as a fluffy feline.

The good news is, that short coat is a breeze to groom, and you won’t need a brush on hand. In fact, brushing this cat’s fragile coat can lead to damage. With this in mind, it’s better to wipe them down with your hand or a cat-safe wet wipe to help distribute the natural oils in their skin and remove any dirt.

In the areas where this cat has little to no fur, such as the ears and paws, you might notice some greasiness. Again, a cat-safe wipe is the best tool for the job.

Beyond the easy coat care, a Cornish Rex will require the regular grooming treatment: nail trimming, checking the ears for signs of infection, and dental hygiene like tooth brushing.

Thanks to their background as hardy farm cats, Cornish Rex cats are generally healthy. That said, there are a few health concerns to look out for:

Fun Fact about the Cornish Rex ♥

If you know anything about another curly-haired cat, the Devon Rex, you might wonder about the differences between the breed. They were both discovered in the 1950s. They’re both from small towns in the South of England. And they both sport a wavy coat!

Amazingly, the similarities have to do with coincidence rather than relation. The gene that causes wavy hair in the Cornish Rex is not the same as the one in the Devon Rex. If you try to cross the two, you’ll get a litter of straight-coated kittens.

Genetic mutations like this are quite rare. But what are the chances that they happened around the same time in the same region with the same outcome? Science is really astonishing!

Final Thoughts on the Cornish Rex

The Cornish Rex is unique in every way you can imagine. The most obvious, of course, is that distinctive curly-coat, but that’s only one memorable characteristic of this breed.

Cornish Rex cats are affable, energetic, kitten-like, and clever. They’re sure to cuddle their way into your heart while also getting you off the couch! And keep in mind that if you try to leave them alone for too long, this cat will find a way to wiggle their way back to your side. A true people-oriented cat, they do best in the care of a Pet Sitter if you’re gone for the weekend.

To put it simply, the Cornish Rex is a lot of cat, but once you make friends with this graceful little feline, you can’t imagine life without one!

How to Stop Your Dog Peeing on Furniture