Do dogs understand mirrors? After watching some of our own pooches struggle to decipher their own reflections, we at Mad Paws haven’t been able to let it go. What’s going on there? Do they think there’s another dog living in some kind of mirror world? Are they surprised to see themselves? Do they think they’re watching a television, just another thing they don’t quite understand?

In this article, we’re going to explore the relationship between your pup and the mirror. In fact, you can help us out by putting on the researcher’s hat, yourself! Place a mirror in a new place in your home at eye level for your pup. Next, observe your doggo – and have your dedicated local Pet Sitter take notes, too – to see if you can notice your dog’s relationship with mirrors.

While we’re waiting for the data to come in from our very helpful Pet Owners, let’s review what the research has to say about whether dogs understand mirrors. 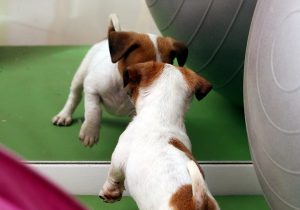 “Do dogs understand mirrors?” A question for science

One thing that we know for sure is that dogs see something in mirrors. Otherwise, there wouldn’t be so many videos of dog-mirror reactions. Sometimes they seem scared, other times they’re determined to play. Either way, in their first encounter with a mirror, they simply seem unable to look away. You can almost see the gears working in those little heads of theirs.

However, according to National Geographic, when dogs look into a mirror, one thing that they don’t see is themselves. Instead, they may think that they’ve stumbled upon another dog – a potential friend or foe – and act accordingly. If they’re a bit worried about a strange dog in their space, they may stiffen and raise their hackles. Or, thinking they’ve found a new friend, they may do that cute little let’s play squat. Visit our article on doggy body language to learn what your dog might be trying to tell their mirror mate.

The reason why scientists are convinced that dogs don’t see themselves is because, they say, dogs don’t possess self-awareness. The key is the mirror test. If you place a mark on a magpie’s wing, and place the bird next to a mirror, something amazing happens. The magpie will see in their reflection that there’s something on their wing, and try to clean it off. Dolphins, elephants, and some apes are also able to do this. However, dogs don’t. Even humans aren’t born with this ability. It’s only when we reach about 18 months that we pass the mirror test ourselves.

Now, there’s been some disagreement in the field of science about whether this is a true indication of self-awareness. After all, the animals that pass the mirror test rely more on their vision than the animals who fail. To this end, some researchers have relied on scent-based tests to prove that dogs do, in fact, possess self-awareness.

As it stands, though, much of the field agrees that while our furbabies may see a reflection in a mirror, dogs understand mirrors much differently than we do. In other words, they don’t see themselves.

Why do some dogs ignore mirrors?

You would think that if a dog really thinks there’s a doggy friend stuck in the mirror world, they would become obsessed with mirrors. I mean, have you ever tried to pull your doggo away from new friends at the dog park? It’s not easy.

However, unlike at the dog park, when your doggo sees the reflection and does their play wiggle or warning woof to grab the attention of this strange mirror-dog, nothing happens. The mirror-dog doesn’t react the way a real, living animal would. And how strange – this doggo doesn’t have a smell. So your pup, although a bit confused, moves on to more interesting things.

This process is called habituation. It’s when an animal loses interest in something as a way to conserve energy and focus on more important things. If our pups’ forebears had spent their time staring at their own reflection in streams, they’d have become easy prey.

Putting our knowledge to the test

If you want to find out just how much your dogs understand mirrors, you can conduct a simple test.

Take a bright blue or yellow sticky note (remember that dogs see some colours better than others) and place it on your doggo when they’re distracted. When you’re sure that they don’t notice the sticky note, entice them over to a mirror and wait.

Your dog might see the brightly coloured sticky note in the reflection. At this point, they may try to investigate by putting their nose prints all over the mirror. Conversely, they might also ignore it. Or, they might just be the first dog to prove self-recognition by trying to take the sticky note off themselves!

We can’t wait to hear your thoughts on whether dogs understand mirrors!

If you’ve got a smart little doggo on your hands, we want to know! Until then, we’ll be browsing the internet watching funny dog versus mirror compilation videos.

How Does Catnip Affect Cats?

How to Train Your Dog to Ignore the...

Do Teenage Dogs Have a Rebellious Phase?

How to Help Your Dog Conquer Their Fear...

Can My Dog Eat Popcorn?

Valentine’s Treat Recipes for Your Dog

Should You Take Your Dog Camping?