Moodle, Maltipoo, Most Adorable Dog Ever. This Dog Breed Corner star has earned many names over the years. However, between the many monikers, one thing remains constant: this dog is a delight. 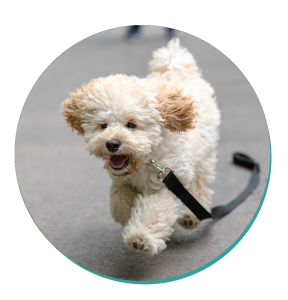 The Moodle, known outside of Australia as the Maltipoo, is a mix of the Maltese and the Miniature or Toy Poodle. And while the Maltese and Poodle have a long history, it was only within the last 20 years or so that this cross became popular. Once families realised that they could have the curly-haired soft coat and intelligence of a Poodle with the wonderfully docile personality of a Maltese, the Moodle gained worldwide recognition.

Personality Traits & Trainability of the Moodle ★

This breed is ideal for novice Dog Owners or anyone looking for a calm, sweet companion. They are affectionate and social, and require less energy than many other dogs of the same size. That said, they’ll happily jump off the couch for a stroll with their Owners or an experienced Dog Walker.

This breed is intelligent and people-pleasing, which makes training both easy and fun. With some socialisation, the Moodle will get along well with other animals, new people, and children. They are a fairly vocal breed, so it may be necessary to work on non-barking commands if you have neighbours. Moodles also don’t like to be left alone, so they’re ideal for large families or families that work from home.

Living, Health, and Grooming Needs of the Moodle ⌂

The Moodle, or Maltipoo, is the perfect dog for apartment living. They don’t need much space, and will enjoy curling up on the lap of their owners for much of the day.

One thing that many Owners love about the Moodle is the easy grooming routine. These dogs don’t shed much, and they sport soft fine hair that only requires some daily brushing.

When it comes to health, there are a few reasons to remain vigilant. White Shaker Syndrome, Epilepsy, and Patellar Luxation are all risks for small dogs. It’s important to talk to your vet if you see your Moodle shaking or having trouble walking normally.

Fun Fact about the Moodle  ♥

As if they aren’t already cute enough, there exists such a thing as a Teacup Maltipoo! This miniature version of the Moodle weighs a paltry 2 kilos, and is as adorable as they sound.

I owned a moodle he was loyal and a real character and he made us laugh a lot ,he had a great personality.