Littermate Syndrome in Dogs: Is It Fact or Fiction?

Maybe sometimes you look at your dog and think: “Wow, I wish I could have brought home the whole litter!” Well, those who believe in Littermate Syndrome might try to talk you out of that particular fantasy. According to the condition in question, puppies raised with one or more siblings from the same litter are more likely to develop behavioural challenges, including separation anxiety and aggression.

But, is there any truth to this theory? If you are interested in bringing home more than one pup from the same litter, are you destined to have a couple of pups who will give the vet, their local Dog Walker, and all your neighbours a hard time?

Let’s pull back the curtain on Littermate Syndrome! 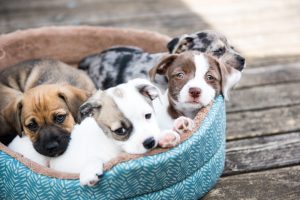 Is there any scientific evidence to suggest that Littermate Syndrome is real?

No. To date, no scientific studies have shown that littermates are more prone to behavioural issues than dogs raised apart from their siblings.

You might say, of course, that just because a phenomenon hasn’t been studied doesn’t mean it’s not real. And that’s certainly true. But, without peer-reviewed studies to turn to, all we have at our disposal is anecdotal evidence. And while you will absolutely find anecdotes of Dog Owners sharing their struggles with raising littermates, you’ll also find plenty of success stories, as well.

Until we have scientific proof that Littermate Syndrome is real, all we have is speculation.

If there’s no scientific proof, what makes the theory so popular?

Even though there are no scientific studies on Littermate Syndrome, it is useful to consider why the theory has survived. Because, we don’t doubt that Owners adopting more than one puppy from the same litter have come up against some behavioural issues! The reality is, though, that it might have had more to do with the humans than the dogs.

Let’s face it, raising one puppy is hard. Raising two is downright overwhelming. Here are a few reasons why behaviour problems may arise when a Dog Owner takes on littermates:

As you can see, the behaviour problems that arise when caring for littermates has less to do with familial ties and more to do with environment and training. In other words, if you adopted more than one puppy of the same age from different litters, you would likely experience the same challenges.

Luckily, there are ways to meet the needs of littermates or puppies of the same age!

How to put Littermate Syndrome to rest for good

The potential problems that come with having two puppies of the same age might be enough to turn you off of the idea of bringing home littermates. But, to be clear, it is possible to raise two puppies of the same age to be well-adjusted, wonderful doggos. If you’re committed to giving each pup the attention and care they need to thrive, it can be a rewarding experience.

Here are a few tips to raise littermates the right way:

With special considerations and care, it is possible to raise two puppies at the same time. It does take a lot of extra work! So don’t hesitate to build your support team of Pet Sitters, family members, and fellow Dog Owners to make things a little easier.

Now that we’ve shed some light on Littermate Syndrome, would you consider taking on two wrinkly furbabies?

Are Butchers Offcuts Good for Dogs?

Grain-Free Diet for Dogs: Good or Bad for...

Bright Dental for Dogs: What’s All the Hype...

What’s the Best Dog Food for Your Furry...

Are Butchers Offcuts Good for Dogs?

6 Tips to Improve Your Dog’s Kibble