This Dog Breed Corner star has a large stature and a long name – which just means there’s more to love! In this article, you’ll learn all about the Sarplaninac of Macedonia. Need someone to care for your Sarplaninac? Mad Paws has some of Australia’s best Pet Sitters! 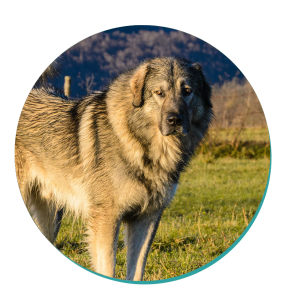 Country of origin – Serbia and Macedonia

This ancient breed hearkens back to the mountain ranges of Macedonia. Experts believe they are one of the world’s oldest native dog breeds, originating from the Molosser breeds.

These large doggos had the important job of protecting and herding livestock from large predatory animals like bears and wolves, which is probably why they’re so large themselves. Later on, their large and intimidating stature made them appealing as guardians, as well as military and police dogs. But for many, many years, the breed never left their region of origin.

It wasn’t until the 1950’s that the breed gained worldwide recognition by registering with the FCI as the Illyrian Shepherd Dog. The name later changed to the Sarplaninac, and a very furry star was born.

Personality, Traits, & Trainability of the Sarplaninac ★

The Sarplaninac is a mild-tempered dog with a huge heart. However, as a guard dog breed, they also have a watchful gaze and a wariness towards strangers. These dogs form strong bonds with their family members, and they have been known to act as a physical barrier between their loved ones and untrusted newcomers.

That said, they’re not aggressive or violent by nature. It takes quite a bit of provocation for these gentle giants to get angry.

As a working dog, this breed is generally a breeze to train. Sarplaninacs are intelligent and determined and can benefit greatly from a consistent training routine.

Living, Exercise, and Grooming Needs of the Sarplaninac ⌂

These dogs are used to living in wide open spaces with their flock, which makes them unsuited for apartment living. They’ve also got a thick double coat that is perfectly adapted to the mountainous regions of their ancestors, but not hot climates.

When it comes to exercise, they need a moderate amount. Sarplaninacs were bred to keep a watchful eye on the herd, only jumping into action if danger arose. However, they’ll get a bit restless at home without daily exercise of some kind.

You can probably guess by looking at the Sarplaninac that grooming is a must. While they don’t shed terribly, they will need frequent brushing to prevent knotting.

You’ll also want to make sure that their folded ears are cleaned regularly to prevent infection.

Fun Fact about the Sarplaninac  ♥

This dog breed has had many name changes over the years. According to some sources, the Sarplaninac had ten name changes before settling on its current one!

Why Do Dogs Eat Their Own Poop?