The Akita is a symbol of health and prosperity in their home country of Japan. What else do you know about this fluffy breed? 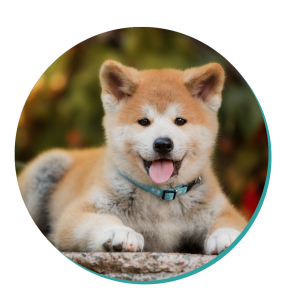 The origins of the Akita are not certain. However, experts believe that the breed originated in the Japanese prefecture of the same name – Akita. This is a mountainous, snowy region of Japan, which explains the thick, full coat of the Akita.

Some say this dog may have originated as far back as 1,000 years, when they were used as fighting dogs. Over the years, the Akita fell out of popularity as a fighting dog. Even so, its Owners saw the breed’s potential as guard and hunting dogs. Indeed, the Akita’s independence and fearlessness allowed them to take on large animals like wild boar and the Yezo bear.

For much of their history, Akitas were owned exclusively by royal and wealthy families. They were a sign of dignity and royalty. And the moment you see one of these proud-looking animals, you can understand why.

The breed stayed mostly in Japan until American activist Helen Keller visited the country in the late 1930s. The Emperor gifted her a puppy and the breed made its way to the United States. Another wave of Akitas went to the United States after WWII. Today, there are two families of Akita – the Japanese Akita and the American Akita. While they are very similar, the American Akita tends to be larger and come in a wider variety of coat patterns.

The Akita has somewhat of a bad reputation as being aggressive and stubborn. That’s not entirely untrue, but as with any dog, an Akita’s temperament has much to do with environment and training.

Akitas are very intelligent animals. They need constant stimulation and entertainment to prevent boredom and destructive behaviours. Training can be a great way to keep them mentally engaged, although it takes a creative trainer to overcome an Akita’s stubborn nature.

Akitas do tend to be distrustful of new people and dogs. With proper socialisation, though, especially early in life, their pack mentality can allow them to form strong bonds. However, be mindful – throwing an Akita into a dog park to try to socialise them will not go over well. It’s best to bring in an experienced trainer to help.

One of the most important things for an Akita is proper exercise. This breed doesn’t require daily runs, but it’s still necessary to give them a brisk walk a couple of times per day.

It pays to keep multiple brushes around the house so you can brush your Akita every few days. With their thick double coat, the Akita will shed all the time, and even more so a couple of times a year when they shed their coat completely.

When it comes to bathing, you don’t need to be so proactive. Once every two months is just fine, unless you have an Akita that really loves rolling around in the dirt.

And how about health? Luckily, Akitas are pretty healthy dogs, generally. That said, their broad chest does put them at risk for bloat. This is a serious condition in which the stomach fills with gas and twists, putting stress on other organs and preventing digestion.

To reduce the risk of bloat in your Akita, you can feed them smaller meals and avoid exercise after mealtime.

The Akita has a built-in trick for walking on snow: webbed feet! Just like snowshoes work by distributing your weight on a wide, flat surface, the skin between an Akita’s toes help them to stay on top of the snow instead of sinking down.

Do Dogs Really Have the Same Personality as Their Owners?

How Much Do You Need to Walk Your Dog?