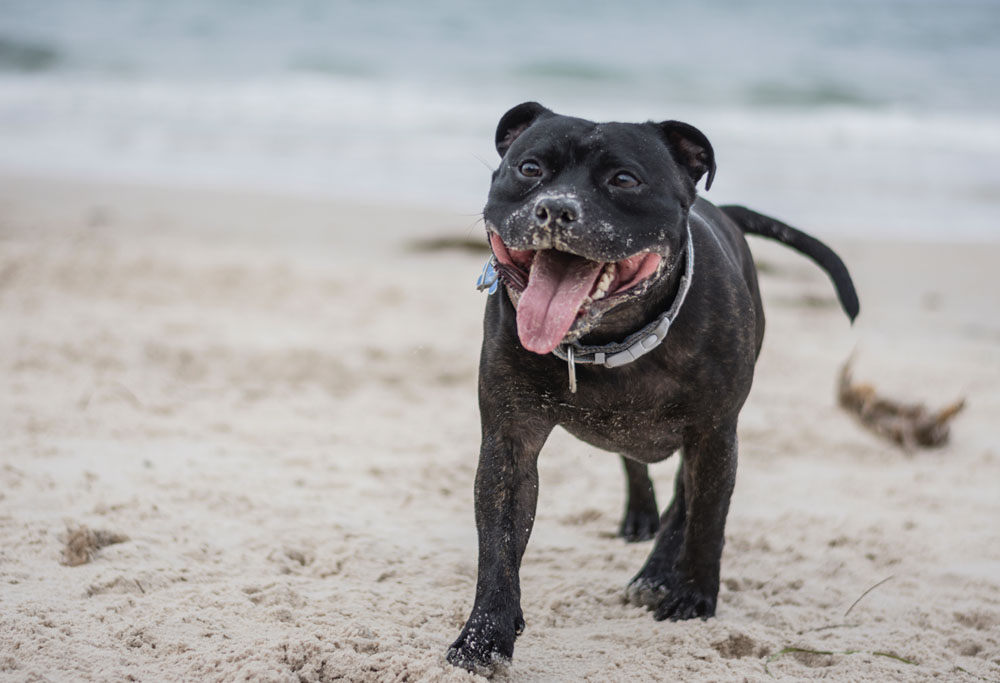 This Dog Breed Corner doggo will bulldoze their way right into your heart. Meet the American Staffordshire Terrier! 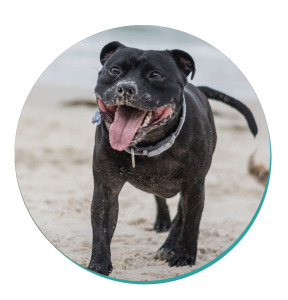 You’ll notice that the name of this breed is a bit misleading. Is it American? Or is it English? Well, as it turns out, it’s both! Breed experts first bred Amstaffs in Birmingham, England, from a now-extinct breed called the Bull-and-Terrier. This earlier breed was responsible for creating many similar breeds we have today – the Bull Terrier, the Staffordshire Bull Terrier, the American Pit Bull Terrier, and the star of this article, the American Staffordshire Terrier. Today, these breeds are often grouped together as part of the so-called Bully Breeds, although there are differences between them.

Back in the 1800s, Dog Owners brought Staffordshire Bull Terriers to the United States to use for a variety of tasks. While some of these tasks were humane, others, sadly, were not. The Staffordshire Bull Terrier is a low-to-the-ground muscular breed that was often made to fight much larger animals, sometimes even bulls, wild boars, and bears. Thankfully, lawmakers outlawed these bloodsports, and breeders began to breed the Staffordshire Terrier as a companion dog. In 1936, the breed gained recognition from the AKC, although they wouldn’t add “American” to the name until 1969.

Due to their unfortunate history, these doggos have gained a nasty reputation. However, the truth couldn’t be farther from their bad image. In fact, for the past hundred years or so, breeders have worked hard to remove any aggressive traits out of this breed. If you’ve ever spent time with an Amstaff, you’ll know these breeders were successful.

Amstaffs are a loving, people-oriented breed that, with proper socialisation, tend to get along just fine with other animals, strangers, and even children. Because of their loyalty, they can sometimes be protective of their pack when it comes to unfamiliar dogs. Even so, early training can teach them not to be aggressive.

Overall, the American Staffordshire Terrier is intelligent, athletic, and easy to train. Training should start early, and you might need to give your Amstaff a refresher course every once in a while. This breed also needs a lot of exercise, otherwise they can become destructive in the house.

Many people have the misguided notion that they can leave their Amstaff in the backyard and call it a day. In reality, this breed is happiest when they can spend as much time as possible inside with the family. They’ll take cuddling on the couch over a large backyard any day.

The American Staffordshire Terrier has a smooth, short coat that is generally clean and odourless. You might give your Amstaff a bath every few months, or if they roll around in something smelly. Weekly brushing can help with the shedding, and be ready for a bi-annual coat shedding. This breed may also be susceptible to skin rashes and irritation, so make sure that you talk to your vet if you see the early signs.

Amstaffs are generally a healthy breed, with low risk for many of the genetic disorders common in other large dogs. That said, you still need to be on the lookout for Congenital Heart Disease and Canine Hip Dysplasia. As we mentioned, they may also be at higher risk for skin irritation, which could be caused by a variety of factors – food allergies, stress, or sensitivity to soaps or shampoos.

The Amstaff made its way to Australia by way of Hawaii in the late 1980s. Since its official breed recognition in 1987, this breed has become more and more popular. While smaller Staffordshire Bull Terrier is more popular, the Amstaff still makes the top 10 on most lists!

Would you like someone to give your American Staffordshire Terrier the workout they need? Book them a Mad Paws Dog Walker in Sydney, Adelaide, or anywhere else. Wherever you are in Australia, we have Dog Walkers who are up to the challenge.

Five Items to Leave with Your Dog When You’re Away

Why are Cats Afraid of Water?