In this post, Dr Kris Fennell from Pawssum Vet to Home Services explores the symptoms of Cushing’s disease in dogs. Pawssum operate in all of Australia’s capital cities. You can also check them out on Facebook and Instagram! 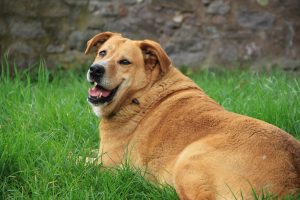 Bobby is a 12 year old Maltese cross whose Owner takes him to a vet clinic for his annual vaccination. He has now reached an elderly age, but his Owner Mrs Norris was always very diligent about bringing him in for his yearly checkup. Over the years he was always given a clean bill off health by the vet. As per routine Bobby presented again for his yearly check, however this time the consult was not as straightforward…

As with any consultation, the vet began by asking some questions about Bobby, which included asking about his eating and drinking habits. Mrs Norris answered that he seemed to be eating and drinking a bit more, but she had thought this may have been due to the recent warmer weather. Because he was eating more, she had thought that Bobby was starting to get a little fat. Perhaps he may have been sneaking some treats from other family members? The vet examined Bobby and found that his abdomen certainly was becoming a little enlarged, and he was also showing some hair loss on his back. Based on these signs and his history, the vet suspected that Bobby may have a condition called Cushing’s disease.

Cushing’s disease: what it is, and how it affects your dog

Cushing’s disease, or Hyperadrenocorticism, is a disease typically seen in older small breed dogs. The condition arises from an excessive amount of the hormone cortisol, which is the body’s stress hormone. The main typical signs of Cushing’s disease include drinking more, urinating more, eating more, abdominal enlargement, and hair loss amongst other less common signs. While these signs are suggestive, they do not always mean Cushing’s disease. For example, there are many other causes of hair loss and drinking more than can be commonly seen in dogs. Thus, Bobby’s vet recommended a series of tests in order to achieve a diagnosis.

Typically these investigations begin with blood and urine testing. Beyond helping to diagnose Cushing’s disease, both of these are always useful as part of a senior health check. If these preliminary results are suggestive of Cushing’s, vets often then perform another more complex blood test.  This will generally be followed by an abdominal ultrasound to confirm the condition. Bobby underwent all these procedures and his results suggested that he had developed the Cushing’s disease.

What to do about it

Now that we have a diagnosis, we need to treat Bobby. Thankfully, in close to 90% of Cushing’s cases, the condition is treatable. This is thanks to medication that aims to suppress the production of the bodies naturally occurring cortisol. Once your pet starts the medication, the clinical signs should slowly start to resolve. However it can take some time to often achieve the right dose of medication. Moving forward, the treatment is often monitored through ongoing blood tests that measure cortisol levels as well as regular checks at the vet to monitor drinking and eating habits.

In Bobbys case, his vet put him on a drug called Vetoryl. Fortunately Bobby responded very well to treatment and his signs gradually begin to resolve, much to the delight of Mrs Norris!

So what’s the take home message?

When our pets grow older, it is important that they have a yearly check up. If Bobby hadn’t come in for his vaccination, his condition may have been missed until he became very sick. It is always a good idea to do yearly blood and urine testing in older pets just to be sure that there are any underlying disease processes that you at home may not be noticing!

If your dog is showing any of the above signs it is important to have them checked by a vet. However, do not panic! While these signs are suggestive of Cushing’s disease, they can be caused by many other things. So while Dr Google might help us in recognising issues with our pets (and may add to a fairly high stress level), ultimately it is only your veterinarian who is able to work out what is wrong with your animal and come up with a plan.

Make the Most out of Your Long Weekend with Your Dog