Do Dogs Know that They’re Dogs?

Have you ever looked into your pup’s eyes and wondered: “Do dogs know that they’re dogs?” At Mad Paws, we think about this constantly. We’ve talked it over with our community of Pet Owners. We’ve asked our Pet Sitters in Brisbane, Adelaide, Perth, and everywhere in between. And yes, we’ve asked our dogs as well.

Well, folks, today the uncertainty ends. In this piece. we’re going to try to answer this question once and for all. If you’re dying to know, too, join us on our quest for the truth! 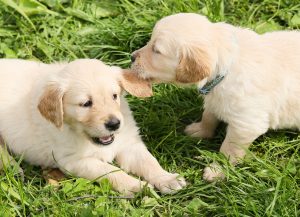 It’s a tongue-twister for sure, but whether or not dogs can conceptualise their own species is important. How can they know if they’re dogs if they don’t know what a dog is?

Well, on this point, we can be pretty sure that dogs do know what dogs are. In our recent article, Do Dogs Think Humans Are Dogs?, we discussed this very issue. We found that dogs are able to identify pictures of dogs in contrast to pictures of other animals.

In other words, when given two pictures – one of a cow and one of a dog, for instance – a dog can point to the picture of the dog. We would assume they’re thinking: “That human with the treats wants me to point out the doggo. Easily done. Dogs look like this.”

That’s pretty spectacular given that the category of “dog” covers so many different breeds. It’s impressive that a dog can look at a shetland pony and think: “Well, hey, that’s not just a long-snouted dog with weird paws. It’s something else completely.” It’s also incredible that a big dog can look at a pug and think: “Is it a sort of furry piglet? No, it’s definitely a dog.”

You may be thinking: “Well, you’ve solved it! Dogs know that they’re dogs!” But hold on a moment. You don’t need to possess self-awareness to be able to categorise species. It’s very different to be able to say “this animal is a dog,” and “I am a dog.”

With this knowledge, we’re one step closer to answering the question,:“Do dogs know that they’re dogs?” But we’re not quite there yet.

Next up, “Do dogs need to know that they’re dogs?”

In the animal world, some species need to know where they belong to stay safe. A school of anchovies, for instance, needs to stay close to their shimmering fish family. A flock of flamingos can’t stray far from their pink mass of feathers. Maybe these animals don’t think “I am a zebra with other zebras,” but there is something inside them that knows: “I am a member of this group. This is where I belong.”

Having said that, do dogs really need a pack of other dogs to survive? We all know that answer. In fact, dogs seem to get along pretty well with a number of other species – the most obvious being humans. All you have to do is search “unlikely dog friendships” to see that dogs are willing to fraternise with other species. Maybe they don’t know that they’re dogs because they don’t really need to know it to survive.

Even so, this doesn’t answer our question: “Do dogs know that they’re dogs?” After all, they could know that they themselves are dogs and their cuddle companion is an owl and simply not care. So let’s move along.

Now, please, someone give us the answer: “Do dogs know that they’re dogs?”

So far, we know two things: dogs know what dogs are, and we’ve bred dogs to manage just fine without the company of other dogs. But that doesn’t answer our main question: “Do dogs know that they’re dogs?”

As it turns out, it all comes down to a little something called self-awareness. Ever watched your dog bark at the window at night because you forgot to draw the blinds? That’s because your doggo doesn’t quite have the brain capacity to understand: “That’s not an intruder, silly. That’s just your reflection.”

According to animal behaviourists, dogs lack the crucial element needed to understand that they are in fact dogs – self-awareness.

To be fair, perhaps those fancy lab tests were unfair to our furry friends. Isn’t it possible that dogs don’t understand how mirrors work, but they still possess self-awareness?

A team of researchers at Barnard College in the US asked that same question. Instead of using a mirror to test self-awareness in dogs, they used urine (gross, but stick with us.) They had pups mark their territory in multiple different locations and then altered the smell of a few urine puddles. When the doggos soured the the area a second time, they tended to skip over their unaltered pee spots and focus on the altered ones.

This may seem like common sense – after all, Pet Owners and professional Dog Walkers witness this daily. For the scientists, though, it was a breakthrough. The researchers concluded that dogs could recognise their own pee, and thus, recognise themselves.

So…did we solve it? Do they know, or not?

In short, the evidence suggests that yes, they do…to a degree. They identify some of the chief components that make them dogs, while still struggling with complex aspects, like their reflection. Of course, let’s be honest: watching our dogs ponder themselves in the mirror is all kinds of adorable.

How Climate Change Will Affect Your Pet

5 Things People Get Wrong About Dogs