This Dog Breed Corner sheds some light on one of the most loving and loyal dog breeds around: the Dobermann Pinscher. Do you yearn for a mile-a-minute Pet Sitter who can keep pace with your Dobie? Check out our top Pet Sitters in Adelaide, Perth, Brisbane, and everywhere else in Australia! 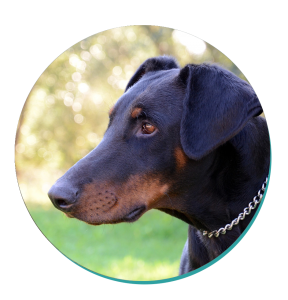 Unlike some breeds with unknown beginnings, the origins of the Dobermann Pinscher are right in the name. Around 1890, a German man named Louis Dobermann created the breed. As a tax collector in a small town called Apolda, Dobermann knew that he was, to put it politely, an unwelcome guest for most people. In addition, a tax collector and his earnings were often targets for muggers. As the bearer of bad news and keeper of cash, Dobermann wanted a dog who could protect him.

To create a dog that looked intimidating and was willing to work, Dobermann drew from a few different breeds – the German pinscher, Great Dane, Rottweiler, German Shepherd, and Manchester Terrier. Dobermann’s dogs were a bit larger and bulkier than modern-day Dobermann Pinscher; the breed became more sleek and graceful over time. Early breeders chose to crop the ears and dock the tail to lower the risk of injury or attack. Even after the need for dogs in tax collection fell out of practice, many breeders and Dog Owners chose to continue the tradition of ear cropping and tail docking.

For much of their history, Dobermann Pinschers have been used as guard dogs, police dogs, and military dogs. In fact, many of us still associate their muscular build and sharp eyes with a dog not to be crossed. However, the Dobermann has proved themselves to be an ideal breed for other jobs, too. Dobermanns make great search-and-rescue dogs, seeing eye dogs, and therapy dogs. They also do well in competitive sports and agility games.

Slowly but surely, the negative image of the Dobermann is fading away. Dog Owners are beginning to recognise that the Dobermann is a dog with big, loving heart. Fortunately, the practice of ear cropping and tail docking is falling out of fashion as well. In many places, including Australia, this type of cosmetic procedure is banned, giving us a fully-tailed, floppy-eared Dobermann.

If you’re looking to fuel your fears of the Dobermann Pinscher, sorry friends – you won’t find it here. When it comes to the Dobermann, breeders have been working hard over the last 50 years to lower the genetic risk for aggression. The other half of the equation is responsible dog ownership, and with the right Owner, the Dobermann will gladly show you their true colours.

If you’ve ever spent time with a well-socialised, well-loved Dobermann, you’ll know that they’re an affectionate breed. They love their Owners and are fiercely protective of their family. The thing they want most in life is for everyone to be safe and happy so that they can be at peace.

As you can see, the Dobermann is a people-oriented dog. They like to be around their Owners, and you’ll often find them underfoot, wherever their beloved humans are. In fact, if you’re used to a standoffish dog, you might be surprised at how nosey a Dobermann can be. Whether it’s their chin on your knee or their back end cuddled up to you on the couch, your Dobermann will seek out physical contact, pretty much constantly.

The fact that Dobermanns are loyal is no surprise. However, the idea that they will only bond with one person isn’t usually true. Yes, some Dobermanns may bond more deeply with one Owner, but that doesn’t mean that the rest of the family isn’t important. You can read our article on whether dogs have a favourite family member to learn more about how everyone in your home can bond with your Dobermann Pinscher.

Dobermanns are also highly intelligent. Indeed, they’ve been ranked as one of the smartest dogs in the world and are happiest when they’re learning new tricks. The flip side, of course, is that this doggo can become quite destructive when not properly stimulated. When bored and hoping for some playtime, a Dobermann may find clever new ways to get their Owner’s attention.

Like any dog and especially large breed dogs, socialisation is necessary. When they learn how to behave at an early age, a Dobermann will be friendly and gentle with other dogs, strangers, and children. Overall, you’ve got a dog with a smart, loyal, happy, cuddly personality. Suffice to say, it’s a far cry from the tough image that the Dobermann has harboured for so long.

To say that training a Dobermann is easy would be misleading. Instead, think of it as a fun challenge. For optimal results, you should be as happy to train your Dobermann as they are to showcase their intelligence.

Given their background, this makes sense. After all, the Dobermann is a dog that was bred to work intuitively. Their early tax collector Owners needed them to be able to read the room and make quick decisions.

When you’re training your Dobermann, you’ll see that they haven’t lost any of that early awareness and quickness to learn. Because they’re people-oriented, you shouldn’t have any issues keeping your pup’s attention. Similarly, you don’t have to worry about spending too much time teaching a particular trick.

In fact, one of the best ways to train a Dobermann is to ensure they don’t get bored. To this end, switch up your training sessions and move quickly from one trick to the next. By doing so, you’ll have a constantly engaged Dobermann Pinscher on your hands. Over time, your Dobermann will see training as a reward, so you might consider carrying treats for impromptu training sessions.

With a Dobermann puppy, keep training sessions short – only around 15 minutes. As your Dobermann grows older, they’ll be happy with longer and longer sessions. However, don’t push it. If you see your Dobermann getting distracted, take it as a sign for a break.

Socialisation is also a crucial aspect of Dobermann training. The best way to banish the Big Bad Doberman image is to familiarise them with other dogs and humans.

The most important part of training a Dobermann is to apply consistency and persistence. It’s not enough to teach your Dobie to sit, stay, and walk on a leash. Instead, think of training as a lifelong practice, a mental treat for your pup, and an opportunity to bond.

Are you hoping to run a marathon some day? If so, congrats! Owning a Dobermann will propel you halfway towards your goal. Suffice to say, this is a dog with high exercise needs, and they won’t let you forget it. They’ll whine, bark, run around the house, and even destroy some of your belongings if you neglect their walking needs. Should you be unable to walk them daily, play it safe and book a Dog Walker.

The Dobermann has a sleek, muscular frame and a wide-barreled chest. That means they are a dog that is built for speed and endurance. Your Dobermann can run after a tennis ball, frisbee, or other toy for an hour or more. Even after a vigorous play session you might still need to take them for a walk before bedtime.

The best exercise for an intelligent breed like the Dobermann is something that will tire them out while providing mental stimulation. For this reason, Dobermanns are great dogs for agility training and tracking clubs. Really, anything that will require them to think and run at once is the perfect way to exhaust a Dobermann.

Because Dobermanns were bred to be guard dogs, we often think of them as yard dogs as well. You’ve read this far, though, so you know by now that locking a Dobermann outside is a really bad idea. They love to be around their Owners and are bound to be bored when left alone.

Of course, that doesn’t mean a Dobie wouldn’t mind having a large outdoor space. In fact, a backyard could be the perfect place for those frequent training sessions. This is especially true if you’re looking into how to train your dog’s sense of smell.

Even so, a small-to-medium sized home isn’t necessarily the worst place to live with a Dobermann. Remember, these dogs are all but glued to their Owners. Whether they live in a mansion or an apartment, they’ll be in close proximity to the family at all times.

In the end, raising a Dobie in a smaller home will simply mean spending more time on outdoor exercise.

Thanks to their shiny, beautiful coat, you can spot a Dobie from a distance. Having said that, keeping their fur that beautiful does take some work.

The Dobermann has a short-haired coarse coat without a thin, softer undercoat. They do shed, so you’ll need to brush them regularly to keep their fur from ending up on your furniture. Dobermanns, like most dogs, will also shed more at certain times of year.

Because the coat is so short, you should be mindful about the type of brush you use with your Dobermann. Coarse bristled brushes may be too rough, resulting in irritating skin. Instead, stick to a rubber brush – to help loosen dead skin and dirt – and a soft bristle brush to maintain shine.

When it comes to bathing, the Dobie is a generally clean doggo. They don’t need as frequent bathing as some other breeds. However, because they’re outside so often, rolling around in the dirt and the grass, it is quite common for Dobermanns to have that signature “doggy smell.” In that case, you might choose to bathe your Dobermann about once a month.

Due to the dog’s large size, many Dobermann Owners opt to take their pups to the groomers, where they might be more comfortable than in the tub at home. Of course, you’ll want to make sure that your Dobermann is well socialised before dropping them off at the groomers. Keep in mind, though, that this is an intimidating-looking dog – even to professionals. To this end, you’ll want to find a groomer that is a good fit for your pup. A nervous groomer with any dog is not a good combo.

As with any barrel-chested dog, bloat is a health concern. This is a life-threatening digestive emergency in which the stomach twists or bloats. While it might not be possible to prevent bloat, you can lower the risk by separating meals into smaller portions. It’s also a good idea to give your Dobermann time to digest their meals before vigorous exercise.
Hip Dysplasia, progressive retinal atrophy, and hypothyroidism are other genetic disorders that are common in large breed purebred dogs. Dobermanns may also face the risk of dilated cardiomyophathy and certain blood disorders.

Fun Fact about the Dobermann ♥

Although the Dobermann has become a popular dog all over the world, there has been a split in the breed between the American Doberman and the European Dobermann.

The major difference between these two dogs is the build. European Dobermanns are slightly larger, a few centimetres taller, and a few kilos heavier. This likely more closely resembles the early breed standards.

Obviously, both types of Dobermann are beautiful. The American Doberman has evolved mostly for show – these doggos love the spotlight. The European Dobermann, on the other hand, has maintained its stocky structure to be remain working dog it always was.

Final Thoughts on the Dobermann

Smart, gorgeous, playful, cuddly, attention-seeking, energetic – is there more that you could want from a dog? We love that the Dobermann is getting the positive news that it deserves, because this is, truly, a great doggo.

Muzzle Training: How It Can Benefit Your Dog