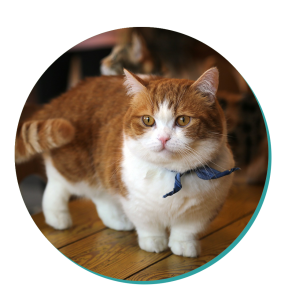 As a recognised breed, the Munchkin Cat is very young. Although short-legged cats were observed in the U.K. in the 1930s, they vanished during the Second World War. Aside from a sighting in Stalingrad (now Volgograd) in 1953, no records exist of a short-legged cat until 1983. It was in Louisiana that the breed first made its mark – and even then, it almost didn’t happen. A Louisiana-based teacher saved two short-legged cats from a Bulldog attack, and it was only when she took them home she discovered they were both pregnant. She gifted one to a friend, they gave birth to their kitties, and the Munchkin Cat was born.

While The International Cat Association recognises the Munchkin Cat as a breed, other cat organisations do not. This is because the Munchkin’s stumpy legs are a result of a mutation, which critics say should not be spread via breeding. However, so far breed experts have not been able trace any health issues back to the Munchkin’s short legs.

Think the Munchkin’s short legs have left it short on energy? Think again! The Munchkin is a high-octane kitty who will whizz around your home with wanton abandon. While they may not be able to jump as high as other breeds, they’re just as fast on their feet. They also enjoy playing, and will even indulge in a game of fetch when the mood strikes them. When they want to play, they have an adorable habit of standing up on their hind legs like a rabbit.

Having said that, the Munchkin also has a tender side, and enjoys an equal balance of cat toys and cuddles. The Munchkin can also be a child-friendly kitty – just make sure your little humans don’t accidentally step on them!

Like most breeds, the Munchkin is best raised as an indoor feline. This isn’t only for the protection of outdoor wildlife – it’s also for the safety of your Munchkin. As a short-legged breed, the Munchkin can’t jump with the ease of other cats, which can create a hazard if they find themselves stranded. For their indoor hijinks, if you can place some cat trees and low shelves around your home, your kitty will better be able to hop around.

Because the coats of Munchkin Cats can differ in length, their brushing needs can vary. Longer-haired cats will require brushing every three days, whereas short-haired Munchkins can get by with a weekly brushing. As with most breeds, you should trim their nails every two weeks, and brush their teeth on a weekly basis.

The Munchkin Cat takes its name from Hollywood. In 1983, their Owner remarked that these short-legged felines looked like the pint-sized munchkins from the film The Wizard of Oz. After a rewatch, we can see the resemblance!