This month, we cast a spotlight on the Most Expensive Dog in the World: the Tibetan Mastiff. Learn about the Tibetan Mastiff’s history, temperament, living needs, trainability, and more! Do you Own a Tibetan Mastiff who requires some extra care? With Mad Paws, you can find Mastiff-friendly Dog Boarders in Perth, Melbourne, Adelaide, and everywhere else! 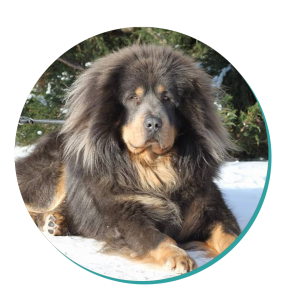 The Tibetan Mastiff is what we call an ancient breed. While official records may only extend back to the 19th century, most historians agree that this doggo is actually thousands of years old. Along with the Basenji and the Alaskan Malamute, this may be one of the world’s oldest dog breeds. So, what’s the full history? How’d they get so fluffy? And where can you find the breed today? Let’s get into it!

If you were an ancient world explorer from around 5,000 years ago, drawn to the “roof of the world” that is Tibet, you might have run into nomadic groups of Tibetan shepherds and herdsmen. Within these on-the-move communities, you would undoubtedly find the Tibetan Mastiff. These larger-than-life doggos would help care for the herd and protect their two-legged companions from bandits and snow leopards. And as a passing traveler, you would probably have written about how fearsome and intimidating these huge dogs were. Indeed, there exist old traveler’s accounts of these dogs, who were none-too-friendly to strangers.

One account claims that, at the time, this dog bore the name Do-khyi, or “dog to be tied up”. This may refer to the fact that they were sometimes tied up when off-duty and other times left to roam and survey the territory. It could also suggest that these powerful dogs had to be tied up for the safety of everyone around.

In other parts of Tibet and China, similar dogs were used to guard temples and monasteries. While we group them with the Tibetan Mastiff today, these puppers may have been referred to at the time as Tsang-Khyi. This version of the Mastiff was likely larger and even more intimidating since their job was to protect sacred grounds.

During this time, the Tibetian Mastiff would astound explorers in the region. However, the rest of the world enjoyed them only as interesting characters in travel journals for many years. That all changed around the middle of the 19th century, when Queen Victoria would receive one of these Tibetan puppies as a gift. The royal family took an interest in the breed; by 1873, the England Kennel Club had formally recognised them as the Tibetan Mastiff.

Despite the name, the Tibetan Mastiff isn’t as closely related to other Mastiff dogs as you might think. Rather, English breeders named them so for their mastiff-like size. In fact, a recent study from the Journal of Molecular Biology and Evolution found by studying their high altitude hardiness that the Tibetan Mastiff breed may have been developed with the help of a Grey Wolf subspecies, the Tibetan Wolf. This is an amazing finding, as most domestic dog breeds come directly from the Grey Wolf. However, the Tibetan Wolf, and subsequently the Tibetan Mastiff, have one key difference. The red blood cells in these canines are 50% more efficient at carrying oxygen than other dog breeds. This trait has allowed them to live comfortably at high altitudes while other doggos would struggle to keep up.

These days, the Tibetan Mastiff has mostly given up its life of mountaineering. Instead, you can find this big fluffy dog in the show ring or in the home of dog lovers across the world.

At a glance, the Tibetan Mastiff has a lot in common with the lion. They’re huge, they sport a bushy mane, and when they roar, they could make Liam Neeson flee in terror. However, the likeness is more than skin-deep. They’re wary of strangers, they don’t back down from a challenge, and they’re fiercely protective of their family. These traits make them appealing – but please consider whether this breed is right for you before bringing one home. The Tibetan plateau is now home to countless Mastiffs who were cast aside by Owners who couldn’t handle them.

As we mentioned, the Tibetan Mastiff is a brilliant guard dog, as they’ll fight tooth and nail to defend their homes. If you enjoy hosting people in your home, though, you may have a problem. The Tibetan Mastiff can treat any strange houseguest as an intruder, which can put your friends in danger. Even after they’ve seen their Owners warmly welcome a guest, they can still remain on edge.

It’s for this reason this breed can pose a hazard for children. While a Tibetan Mastiff will be loving and gentle with human children from their Owner’s family, they can lash out at other kids. For parents who host playdates for their children, this can pose an issue. To train your Tibetan Mastiff to be more stranger-friendly, socialise them around dogs and humans from an early age.

Like all dogs, Tibetan Mastiffs need exercise. They were never bred to be long-distance runners, but they do enjoy a good long walk. Perhaps because they were called on to patrol the premises when their Owners were sound asleep, these dogs are naturally more energetic in the early morning and late evening. And coincidentally, that’s the best time of day to walk them temperature-wise.

While you’re walking this large doggo, make sure to switch up the route frequently. Otherwise, you’ll signal to them that this isn’t a fun fresh air stroll but rather a scheduled patrol of the territory.

This pup’s large size means that they’re not great candidates for agility training, and you’ll notice that as they grow into adulthood, they don’t have very high exercise needs. But while a Tibetan Mastiff will happily laze around all day while you’re at work, it’s also a good idea to give them the opportunity to stretch their legs and boost their circulation every once in a while. Here, a dedicated Dog Walker can be a big help, but remember that this will only be appropriate for a well-trained and socialised Mastiff. You’ll want anyone who comes into your home to be well-known and liked by your Mastiff.

In their days of herding and guarding, the Tibetan Mastiff needed to be able to think independently and stick to their intuition in order to care for their flock and their territory. This has made them a particularly difficult doggo to train. Every dog is trainable with enough patience and consistency, but you’ll find that reeling in and maintaining this dog’s engagement is tough.

Stick with it, though. This is, after all, a large dog that will need basic command training to keep them and everyone around them safe. We absolutely suggest professional obedience training for a Tibetan Mastiff, even with experienced Owners.

Clearly, you’re not going to want to house an animal the size of a Tibetan Mastiff in a small apartment. The issue isn’t necessarily destructiveness – these doggos aren’t likely to chew and scratch up your home like other breeds – but you’ll notice that they aren’t as chipper and happy in small spaces.

If you really want to appeal to the nature of the Tibetan Mastiff, you’ll give them a large open home layout with an even larger outdoor space. That way, they’ll be able to strut their admirable patrolling skills, while getting in some much-needed walking exercise. The more that they can survey their land, the happier they’ll be.

There are a few caveats, though. For one, you’ll want to make sure that any outdoor space is securely fenced. You don’t want a Tibetan Mastiff on the loose or any other animals getting into your yard. Otherwise, there’s bound to be trouble.

Something else to keep in mind is that even when a Tibetan Mastiff is otherwise content, they’re going to bark up a storm any time they feel that their territory is in danger. These aren’t exactly quiet doggos – in fact, a Tibetan Mastiff bark is quite a bellow. In order to avoid issues with neighbours, it can be helpful to put up a visual barrier between your property and the outside world. Read up on our 5 Tips to Stop Neighbours Complaining About Your Dog for more ideas.

When thinking also about living conditions, consider where these furry giants come from. They’re accustomed to cold, snowy plateaus and mountains, so they’ll need extra care in warmer climates. Give them plenty of water on warm days and be on the lookout for overheating. Make sure that your dedicated Dog Walker knows to take things slow and steady to prevent overheating during their daily walks.

You can guess this one is going to be a challenge, right? And it’s true. Regular brushing, at least once per week, is necessary to prevent matting and even yeast or fungal infections from forming in a Tibetan Mastiff’s oversized coat. During the shedding seasons, you’ll need to groom more frequently – about three times per week.

To make the job easier for yourself, make sure to invest in specialised grooming tools for long-haired dogs and work in sections until you’ve covered the entire body. This is a laborious job, so some Owners choose to place their Tibetan Mastiff on a raised table to avoid back pain from bending over. You might, of course, hire a professional to do it for you.

The good news is, with regular brushing, this breed doesn’t require frequent bathing. They’re naturally hygienic animals who will keep themselves clean, and they don’t tend to have a doggie smell. You’ll only need to bathe them when you deem it necessary, but no more than once every few months.

As with all doggos, this breed should have regular nail trimming and tooth brushing. Make sure to start with these habits early so that you’re not trying to wrangle an adult sized Tibetan Mastiff with a toothbrush in hand. Learn more about canine hygiene in our article, How Often Should I Brush My Dog’s Teeth?

You might have noticed that this is a dog with a fairly long lifespan for its size. And in general, this is a pretty healthy breed. There are, though, some health concerns that might come up for these dogs:

It’s also very important that a Tibetan Mastiff has a proper diet to prevent obesity. Since their exercise needs are low, the risk for weight gain is high.

This breed holds the world record for the most expensive puppy ever sold: a whopping $2.2 million. The pricey puppy was purchased in 2014 in China, where the red Tibetan Mastiff pup was considered to be highly valuable.

Half a decade later, China no longer sees these furry giants as the latest must have trend, perhaps because of their difficult personalities. That’s probably for the best. These doggos deserve homes where they can be treated as irreplaceable family members instead of valuable status symbols.

Final Thoughts on the Tibetan Mastiff

This isn’t a dog for everyone. They’ve made their way through history with a tough personality and ability to thrive in harsh climates. They’re not exactly the cuddly teddy bears that that big fluffy coat suggests. And they’ve got a bark that will make you jump out of your seat. Hosting dinner parties with a Tibetan Mastiff is not easy, and they’re not suitable around children.

With the right family, though, these dogs can be loyal pooches that any Dog Owner can fall in love with. If you can dedicate the time and effort into training, socialising, and loving this animal, they’ll be your constant companion and excellent watchdog. Life with a Tibetan Mastiff can be a challenge, but they’re some of the most amazing animals you’ll find.