The Nebelung is a large, fluffy, and absolutely adorable breed. Learn more about this cat’s temperament, living needs, and health! 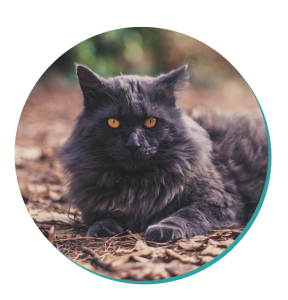 The Nebelung doesn’t have a very long history. In fact, the breed is only about 30 years old. It began when Cat Owner, Cora Cobb, bred a black Domestic Shorthair with what looked like a long-haired Russian Blue. The result was a darker blue long-hair with a wispy, delicate coat. Cora’s new kitties were so gorgeous that she knew she had to go about making them an official breed. It took a while, and a bit of help from some friends and other cat lovers, for Cora to gain official recognition, but today the Nebelung is a sought-out and admired breed.

Today, the Nebelung is a fairly rare breed. They’re most common in the United States, France, and Russia. Nebelungs are sometimes showed throughout Europe, but their true place is in the home of a loving family.

The Nebelung is a loving and loyal companion for any family. Although they can be a bit shy at first, these kitties show affection to most people. You’ll often see them trying to climb into the lap of their favourite human, and they generally enjoy being around people.

With that in mind, be ready for a cat that requires plenty of attention and love. They want to be in whatever room you’re in, and they’ll snuggle right into bed with you. Plus, if anything is wrong, or they simply miss you, this vocal cat will let you know.

These cats do particularly well in stable, predictable environments. If you move frequently, rent out a room to short-term guests, or expect other predictable changes, a Nebelung might not be the right breed for you. That fussiness is only because these cats build strong bonds with key people in their lives. As a result, they become stressed when they think those bonds may be threatened.

Nebelungs are highly intelligent, with an affinity towards humans, which makes training them a breeze. They’re fairly easy to leash train, but you can also teach them some fun indoor tricks as well.

Perhaps because this breed is so young, it doesn’t have any gene-related issues to worry about. Provided that you give your Nebelung all the love and care they need, they’ll have a long and happy life.

Like with any cat, though, it’s important to make sure that your cat exercises regularly and eats nutritious food. These cats also may be more susceptible to bladder stones. Always make sure to give your Nebelung fresh water and take them to the vet at any sign of blockage.

When it comes to grooming, these cats have a double-layered medium-to-long coat. In other words, be prepared to give  your cat some regular brushing. But again, this can loves the attention, so it won’t be a struggle to prevent matting and tangles.

The breed’s name comes from the German word nebel for fog, which perfectly reflects both their rich color and their dreamy poise. In fact, although these cats come from Colorado, you wouldn’t expect it from the names of the founding kitties. The world’s first Nebelungs came from the two beautiful cats: Siegfried and Brunhilde. But despite the German names and roots in Russia, these cats are American, through and through.

Pet Sitters, Rejoice – You Can Now Create Bookings for Your Clients

How to Move House with Your Cat