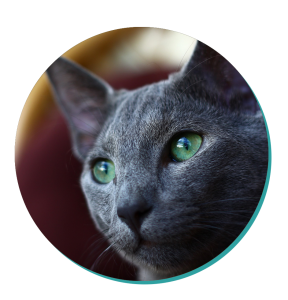 The origins of the Russian Blue are steeped in mystery. The breed is believed to hail from – you guessed it – Russia, but became popular in Scandinavia and the UK. British sailors are said to have first brought Russian Blues back to England from the northern Russian port of Archangel.

The Russian Blue first earned global acclaim in 1871, when they appeared at a cat exhibit at the Crystal Palace in London. During the Second World War, they were almost pushed to extinction by harsh conditions in their home regions. These days, the Russian Blue is a favoured breed all over the world.

“Still waters run deep” is a phrase that best describes the Russian Blue. This kitty can be wary of new people and slow to trust strangers. However, once they’ve learned you’re on the level, the “Archangel Cat” will be your friend for life. While they aren’t known for their outbursts, they’ll be sure to let you know how they’re feeling. If they want some alone time, they’ll scamper to a top shelf. If they’re craving your love, they’ll stare at you with big, watery eyes until you tickle them under the chin.

The Russian Blue is a whizz with children, and can even be trained to play fetch. They’re also happy to keep their own counsel when you’re not home, but will be pleased when you return. Finally, Russian Blues will form a “favourite” in any household, so don’t feel jilted if they shun you for your partner.

Russian Blues and apartments are meant to be. This kitty is quick to startle, and will often feel threatened by the sights and pressures of the outside world. They can also be the target of catnappings, so for their their safety, it’s best to raise them indoors. Simply give them the rule of your house or flat and watch them claim it as their domain!

This cat is also a creature of habit, and doesn’t like having their routine disturbed.  Feed them, cuddle them, and change their litter at the same time every day, and you’ll have a happy kitty on your hands.

Russian Blues come from stout stock, and suffer fewer health problems than many other breeds. However, their appetites are the stuff of legend. If left to their own devices, Russian Blues gorge themselves like tourists at a buffet, so control their portion sizes at meal times.

In old Russian folklore, Russian Blues are viewed as omens for good luck. Tsars would even place a Russian Blue in their children’s bedrooms to fend off evil spirits!

How Do I Convince My Cat to Love Me?

Four Things We Learned from “Take Your Dog to Work Day”