The Persian Version 2.0, Furniture with Fur, Lounger Extraordinaire  — the Exotic Shorthair has earned many names. Learn more about the history, trainability, and health of this sweet-tempered cat breed. And for a Cat Sitter in Brisbane, Geelong, or anywhere else, check out Mad Paws! 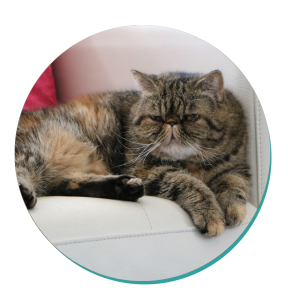 The Exotic Shorthair is an offshoot breed of the ever popular Persian Cat. Around the 1950s, cat fanciers were testing out new ways to preserve that loveable Persain personality while achieving different coat colours. American breeder Carolyn Bussey was particularly interested in creating a brown Persian cat, and she thought one way to do it could be with a Burmese Cat. Carolyn found that, while she was wrong about the coat colour (her first few litters came out black instead of brown), she had struck on something much more interesting. The kittens were the first example of a short-haired Persian Cat. They had all distinctive qualities of a Persian, but they maintained the soft, short hair of their Burmese side.

It wasn’t exactly what she set out to do, but Carolyn instantly recognised the appeal of a short-haired Persian. In a decade when convenience was key, the idea of an easy-to-groom cat was quite appealing!

She was right to think that she had found something that the masses would love. The Exotic Shorthair was a big success, appealing to both Persian lovers and first time Cat Owners.

But Carolyn Bussey didn’t simply want to breed a popular cat. She also cared about the health of her new breed. Luckily, she wasn’t the only one thinking about Persian cat offshoots. At the same time, other breeders were attempting to create a silver Persian, which would be called the Sterling Shorthair. These cat fanciers were relying on American Shorthair and British Shorthair cats to achieve the silvery coat colouring. Eventually, the two schools merged, giving us the Exotic Shorthair. And by the 1970s, the breed had grown large enough that Exotic Shorthairs could be considered a stand-alone breed.

With recognition by the Cat Fanciers Association and the International Cat Association, the Exotic Shorthair gained official status. Today, you can find them in households across the globe.

Like many of the most recent cat breeds, understanding the Exotic Shorthair requires a closer look at the personality of its parent breeds.

Let’s start with the Persian, since it seems that these personality traits are the most prominent in the Exotic Shorthair. And, that’s a huge benefit. Persian cats are beloved for their amazing personalities.

In general, Persians are known to be laid-back and easy-going. They love attention from their favourite humans, but they tend to get along with everyone, from strangers to kids to other animals.

Like the Persian, Burmese Cats are also very loyal and affectionate. They’re slightly more active than the Persian, so you might find your Exotic Shorthair to have bursts of playfulness. Another thing that the Exotic Shorthair adopted from their Burmese background is a soft, sweet meow. You won’t hear it often, but it’s absolutely endearing when you do.

American and British Shorthairs make up a smaller slice of the Exotic Shorthair background, but there are a few personality traits that have trickled down. These just happen to also include loyalty and an always relaxed approach to life. Of all of the breeds that went into the Exotic Shorthair, the British Shorthair is perhaps the least affectionate. But, they still seek out the companionship of their favourite humans.

As you can see, the Exotic Shorthair is a blend of all the best characteristics of their background breeds. But, you’ll find that they’re not exactly like any one of the breeds that came before them. Sweet, laid-back, sometimes playful, and always around, the Exotic Shorthair is one-of-a-kind. And, you’d be hard-pressed to find a flaw with this feline!

Exotic Shorthairs just want to lounge around and give you heart emoji eyes all day. But when it comes to training? They’re not too interested. That’s not to say that it’s impossible. But these cats will likely be more interested in earning your love with their adorable cuddles than complying with your training sessions.

Of course, though it’s a bit challenging, Exotic Shorthairs—like all cats—can and should be trained. In fact, training can provide beneficial mental stimulation and an opportunity for more bonding with your pet. So, it’s a good idea to set aside some time each week for training, even if you only manage to teach your Exotic Shorthair very simple tricks.

It should be clear, by now, that your best tool in training this cat is patience. Treats are a close second. With enough time and encouragement, you can teach this cat to sit, come, roll over, and a number of other tricks.

As we’ll cover in the Exotic Shorthair health section, these cats are more prone than most breeds to obesity. That’s because they are pretty low energy cats. But, that doesn’t mean that they don’t have exercise needs!

On the contrary, Exotic Shorthairs need some daily playtime and activity to be healthy and happy. You may need to spend some time finding out what kind of games will convince them to get off the couch. But this trial and error process is absolutely necessary for your cat’s health.

Some Cat Owners find that the best way to tire out an Exotic Shorthair is to provide them with a furry playmate. These normally low-energy cats often change their tune when in the presence of other Exotic Shorthairs, becoming suddenly kitten-like and active. So, if you’re able to grow your furry family, it could be beneficial for their health. Take a look at our article, How Do I Introduce My Cat to a Second Pet? for some advice on making a smooth transition to a multi-pet household.

You’ll also notice that it’s not just playtime that these kitties need, but quality time as well. Exotic Shorthair cats are prone to separation anxiety and shouldn’t be left alone for long periods of time. When they are going to be left alone, they’d much prefer to be in the care of a gentle Pet Sitter, who can provide them with plenty of head scratches!

That said, these cats can sometimes be shy around newcomers. If you’ll be calling in the help of a Pet Sitter often, you might find that your cat is more comfortable in the care of a familiar face.

Even though these cats seem to be content in whichever setting you place them in, they can still benefit from some environmental enrichment. In a 2010 study, researchers found that simple additions, such as cat scratchers and feline-safe plants, can provide cats with an outlet for their natural behaviours.

It’s a good idea to be proactive about making these changes, because unlike some other cats, Exotic Shorthairs aren’t likely to show when they’re unhappy. You may not realise that this cat breed is bored until after you introduce some fun cat-friendly elements and see them come alive.

One final thing to consider for this cat’s living conditions is climate. As a brachycephalic breed — cats with smooshed-in noses—Exotic Shorthair cats may have a harder time regulating their body temperature. Heat exposure can be less obvious in cats than in dogs, so it’s a good idea to familiarise yourself with the common signs of heat stroke in cats. And on particularly warm days, make sure that they have a cool place to relax.

Even though early breeders paid special attention to the Exotic Shorthair’s health, they weren’t able to eliminate all genetic disorders in the breed. These cats may experience:

Compared to the Persian, Exotic Shorthair cats are a breeze to groom. But there are a few grooming tasks that you’ll want to do on a regular basis to keep this cat looking and feeling good!

First, let’s talk about that adorable little face. Exotic Shorthair cats have a distinctive flat face that, while cute, can harbour bacteria that will stain their fur. Owners will want to keep cat-friendly wet wipes on hand to keep their furry friend’s face clean. If you notice excessive eye watering, it could be a sign of infection, so be sure to reach out to your vet.

As far as that fur goes, you’ll notice that this cat has more of a fuzzy, downy coat than other cats. Not only is it amazingly soft, but this type of fur is also pretty immune to knots, tangles, and mats. That means less of a need for brushing! But, they do shed, so you can help manage the amount of fur that ends up on your furniture by brushing this cat weekly or every couple of days.

Beyond that, care is the same as you might expect for any feline friend. Check their ears for infection, brush their teeth as often as you can, and clip their nails.

If your Exotic Shorthair has grown accustomed to and enjoys taking baths, then the occasional bath can remove dead skin and hair follicles. You’ll also marvel at the cloudlike softness of a freshly bathed Exotic Shorthair! But, adult cats who have never been bathed are likely to find the whole thing stressful. For these cats, regular bathing isn’t necessary.

Fun Fact about the Exotic Shorthair ♥

Exotic Shorthair cats are often described as a quiet breed. They don’t meow much, and when they do, it’s a soft little squeak. But, it’s not exactly accurate to call them silent.

In reality, these cats are purring machines.

Every Exotic Shorthair Cat Owner knows the rumble power of this furry feline. Once they get going, that purring is anything but quiet!

And, as it turns out, Exotic Shorthair cats, along with other cat breeds, might be using their purr to communicate in lieu of meowing. How does it work? Well, we all know that cats purr when they’re happy. But according to some studies, cats also rely on high frequency purrs to convey to their Owners that they want something, like food or pets.

So, even though Exotic Shorthair cats don’t have a tendency to meow, that doesn’t mean that they’re not able to communicate. As an Owner of this breed, be ready to start interpreting different purring frequencies!

Final Thoughts on the Exotic Shorthair

In many ways, the Exotic Shorthair fits the bill of the perfect feline. They are friendly, relaxed, happy to cuddle, and open to furry friends of all sizes. They don’t require much grooming, and aren’t likely to destroy your furniture with any pent up energy.

That doesn’t mean that the Exotic Shorthair is without some requirements. Their unique facial structure can put them at risk for heat stroke, and there is a fair amount of health concerns common in the breed. Their penchant for lounging can also be a drawback—maintaining this kitty’s weight can be challenging given that they’re not naturally active.

But, if you’re able to have this cat in a house with other animals, and take the time to train and play with them, you’ll see just how special this cat breed is. Your Exotic Shorthair will happily fill the role of sweet, loyal, lap cat.