What Do Dogs Think About TV?

Our pupper pals tend to be pretty clingy creatures. They stick by our side whether we’re washing the dishes, preparing a fresh, tasty dog meal for them, or watching the news. But while you’re laughing at that sitcom or dreading that next jump scare, chances are you have no idea what’s going on in your pup’s head. We know that dogs can (and do!) watch TV, but the question remains – what do dogs think about TV?

Many Dog Owners have their own anecdotes of the four-legged friends in their lives watching and reacting to TV, but it’s hard to know what they’re actually thinking. That’s why we’ve done the hard work to find out the answer once and for all. 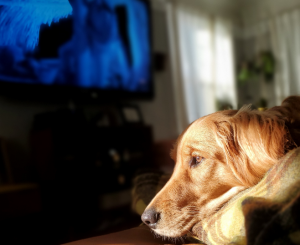 What do dogs see when they watch TV?

We’ve all seen those cute videos of pooches barking at other animals on the TV, and we tend to assume they see exactly what we do. However, that’s not necessarily the case.

Humans have trichromatic vision. This means we have three colour receptors and can therefore see a wide range of colours. 10 million, to be exact. Dogs, on the other hand, have what’s called dichromatic vision. This means they have only two colour receptors and can only see colour in two spectrums of light. As a result, they only see the world in shades of yellow and blue.

Even though their colour vision is more limited than ours, our furry friends are still smart enough to be able to discern what it is they’re seeing. If there’s another dog on the TV, research shows they can recognise that it’s a dog. If there’s a tennis ball, chances are it’ll look pretty familiar to them. However, this wasn’t always the case. Like us, dogs have benefited from the improvements in television technology over the years. Modern high-definition TVs have higher screen refresh rates. Because of this, they’re a lot smoother and easier on the eyes – both for us and our pups.

One thing dogs do struggle with, though, is depth perception. Humans are able to differentiate between our standard three-dimensional view of the world and the two-dimensional images we see on TV. Our pups, on the other hand, don’t perceive depth in the same way. As a result, it’s not unusual to see them searching behind the TV to find these moving objects, only to realise they’re not actually in the room with them.

So, what do dogs think about TV?

We have a good idea of what they see when they’re watching telly, but what do dogs think about TV? Do they actually enjoy a good Netflix marathon as much as we do? Research on the topic is quite limited, however one study found that, when presented with three different screens, they preferred watching nothing at all. According to researchers, this finding “suggests that TV watching, for dogs, may be much less fun than wandering around, eating, taking a drink, sleeping, and playing with toys.” This doesn’t necessarily mean dogs don’t like watching TV, it just means they’d probably prefer to go for a nice long walk with you or their local Dog Walker instead.

It’s also important to note that our canine pals have far shorter attention spans than us. Even if your pup does decide to watch some TV, you’ll probably find they don’t focus on it for hours. Dogs get easily distracted, so while they may occasionally glance at the TV, they probably won’t watch a whole movie with you. That might sound a little sad, but on the bright side, you can rest assured that when your pooch is beside you while you’re watching a flick, they’re there simply because they want to be close to you. Adorable, right?

Since they have shorter attention spans, a slow documentary won’t be the most exciting thing to your doggo. That said, any show or movie that’s particularly fast-paced or flashy is certainly going to get them interested. Why? Because dogs process visual information a lot faster than us, and many breeds are motivated by moving objects. It’s the same trait that makes herding dogs so good at rounding up sheep!

This fascination with movement is the basis for America’s dedicated canine cable TV channel, DogTV. Created by scientists and dog experts, this channel broadcasts dog-friendly content 24 hours a day. Each ‘show’ displays in the two colours visible to pups (blue and yellow), so it’ll look weird to us, but normal to them.

Every dog is different, with a unique canine personality and their own likes and dislikes. There are some puppers who couldn’t care less about TV and others who are just as addicted as us. While we probably can’t expect a dog version of Gogglebox (Dogglebox, if you will) anytime soon, we can still enjoy watching their heads tilt as they try to comprehend the drama unfolding on The Bachelor.

9 Cat Facts that Will Blow Your Mind