Is it a rug? Is it a mop? No – it’s a Bergamasco Shepherd! Learn all about the world’s most boombastic sheepdog in this Dog Breed Corner. 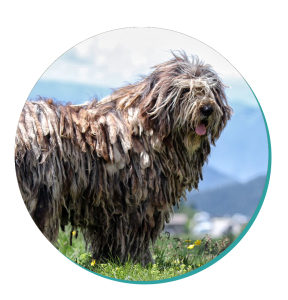 Depending on who’s in the room, a mention of the Bergamasco Shepherd’s origins may spark a patriotic debate. While all agree that the breed hails from the Italian alpine town of Bergamo, its ancestry is where they differ. Some French breeders suggest that the Bergamasco Shepherd descended from the Briard, a herding breed from France. In contrast, Italian dog lovers argue that the Bergamasco influenced the Briard, having itself evolved from an ancient Phoenician dog. Experts tend to agree with the latter statement, tracing the breed’s predecessor back 7,000 years to modern-day Iran.

Regardless of its heritage, the Bergamasco Shepherd spent many centuries guarding and herding livestock on northern Italian alps. A strong and muscular breed, the Bergamasco packs a lot of muscle under its shaggy coat. Of course, its ropy fur doesn’t simply exist for our amusement; the extra layers keep the canine warm in the frosty climes of its alpine homeland. They also protect the Bergamasco Shepherd in tussles with predators, with the long sheets of hair acting as a shield.

As with many European dog breeds, the Bergamasco nearly died out in the aftermath of WW2. However, those devoted to the breed have nurtured their numbers back to health in recent times.

When looking at the Bergamasco, it pays to know three truths: they’re smart, they’re social, and they’re super affectionate. Most of the time, these traits combine into a loving, effervescent pooch who is eager to please their Owner. In some cases, though, the Bergamasco’s sharp wits can birth an independent streak if they’re not fully trained and socialised. For top results, train and socialise your Bergie from a young age. If you adopt them later in life, try applying these tips.

Thanks to their intellect, the Bergamasco Shepherd will view their Owner as an equal rather than a master. Similarly, if they live with a family, they’ll bond with each family member in a unique manner. We often hear people say “our dog loves every family member equally – just in different ways”. In the Bergamasco Shepherd’s case, they’d be correct!

While they love and bond on their own terms, you’ll look long and hard before finding a more loyal pooch. They’ll also remain well-behaved in the presence of friendly strangers, so long as their Owners have socialised them. Having said that, they’ll also alert you to danger if someone poses a threat to their home or loved ones.

The Bergamasco Shepherd bonds well with younger family members, too; in fact, they often serve as therapy dogs for handicapped children. Just remember: that patience can translate into a need for company. Whenever you can, ensure you don’t leave them on their own for too long.

In regards to exercise, the Bergie doesn’t require as much as some other shepherd dogs. Provided someone gives them a good walk (and some cuddles) every day, they’ll be happy. They also appreciate a solid game of fetch, so keep a ball handy!

Great news, Bergie lovers: this breed is preeeetty healthy. However, like any dog, the Bergamasco Shepherd can suffer from general health problems. For their welfare and your peace of mind, take them to a vet for occasional checkups. Specifically, ask them to assess your Bergie’s elbows and hips for any latent issues.

Now, I know what you’re all looking for in the “Grooming” section: more info on that luscious coat, right? Well, despite all appearances, it’s not too hard to maintain. The Bergamasco Shepherd’s coat sports three tiers of hair: “goat”, “wool”, and “dog”. The former two types don’t grow in earnest until the Bergie is around 12 months old, after which their coat will assume a new dimension of shaggyness. At this stage, you’ll need to rip their coat into the dreadlock-like mats for which the breed is known. You’ll likely need to set aside a Sunday for this task, as it can take some time and effort.

Sound like a lot of work? Don’t worry – it’s a one time deal. Once you’ve torn their coat into mats, you’ll never need to do it again. After that, they won’t shed, and you’ll rarely need to brush them. Thanks to this trait, the Bergie can be a safe choice for people with dog allergies. Even so, if you have an allergy, play it safe and confirm with your doctor before bringing one home.

Fun Fact about the Bergamasco Shepherd  ♥

Have you ever wondered why the Bergie’s matted coat grows over their eyes? It’s to protect the dog’s vision during snowstorms. To create some space between the curtain of shag and their eyeballs, each Bergamasco Shepherd sports extra-long eyebrows.

Looking for someone to care for your Bergie in Sydney, Hobart, or anywhere else in Australia? Take a look at the local Sitters in your area!

Five Things to Consider when Pet Sitting a Big Dog