Five Things to Consider when Pet Sitting a Big Dog

In this article, top Pet Sitter Odette McCarthy highlights what every Sitter should know before caring for a big dog. Are you looking for a Pet Minder in Sydney or its surrounds? Visit Odette’s Sitter profile! Do need a Dog Sitter in Hobart, Brisbane, Melbourne, Perth, or any other Aussie locale? Take a look at our other Minders! 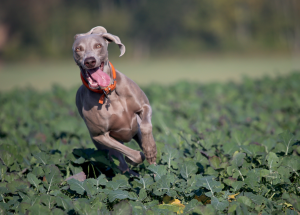 Ever been unsure whether reply with a resounding “Yes” when asked to mind an incredibly big dog? Your confused gut has been telling you something! Before minding a massive Weimaranar, a great Great Dane, a tres grande Dogue des Bordeux or a STUPENDOUS St Bernard, there are definite things you need to consider. Don’t go into this RUFF relationship thinking life looking after a largey will be lax.

The more whopping the Wolfhound, the more whopping the walk! Big dogs often come with big energy levels and have much greater stamina than, say, a pint-sized Maltese. Some big beautiful beasts can go nonstop for hours, so be prepared… your endurance is sure to be tested! If you are not much into catering for canterers then perhaps you are not much into colossal canines.

Another factor to be wary of is the power of the pooch. The greater the dog usually means the greater the strength, particularly when the pup is heavier than the person. (Having said that I have even come across a Kelpie and a Beagle who both pulled me where they wanted to go!) Leash tugging may be a problem. Hiking with a huge hound can feel more like Fido is walking you rather than the other way around. But this is no alternate universe; you will still be the one picking up their poop, NOT vice versa!

Don’t keep a whale in your pool, that’s cruel! The same principle applies to doggos. In other words, don’t jump at the chance to look after a beautiful Dogue de Bordeux if you’re planning on confining them to your teensy one-bedroom apartment with a few tiles for a backyard. Think before you accept such an absurd challenge. If you don’t, you’ll have an Alice in Wonderland moment, the big beast busting out of your bantam building.

Potential to scare with a big dog

Before taking on a massive Tibetan Mastiff or St Bernard, consider their temperament and that of the people and animals in and around your home. After all, big dogs have the potential to scare other dogs, people, and children.

Puny pups overcompensate for their size by acting bigger and tougher than they are. Despite bigger dogs being generally less aggressive, their stupendous size and power can be intimidating for unwitting people and pets. Be aware of this before bringing one into your home or taking one on a walk.

Although in general larger dogs are more obedient and tend to take to training quicker than smaller dogs, if they have not been trained in particular areas, their behaviours can have an extravagant effect.

So remember: when caring for a big dog, there are differences from their smaller brethren that you need to consider first. Don’t bite off a bigger bone than you can chew!

Train Your Dog to Climb Stairs in 4...

4 Ways to Prepare Your Dog for the...

7 Tips to Keep Your Dog Cool During...

How Many Languages Can Dogs Understand?