The Bull Arab dog is a laser-focused worker and a loving family companion. Learn more about this  dog’s history, health, and exercise needs in this Dog Breed Corner! And for Bull Arab-friendly Pet Sitters in Townsville, Bendigo, or anywhere else, check out Mad Paws! 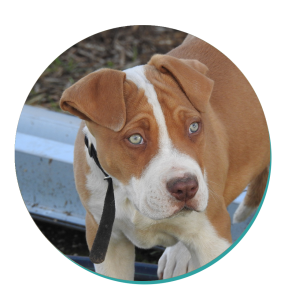 Back in the early 1970s, a breeder named Mike Hodgens set about developing a dog breed that would be good for one thing: pig hunting.

But, perhaps to create a breed well-suited for the Australian landscape or stick with breeds already popular in Australia, Hodgens didn’t rely on the pig dog breeds that already existed.

His first generation of Bull Arab were made up of 50% English Bull Terrier, 25% Greyhound, and 25% German Shorthaired Pointer (or, some argue, English Pointer). This gave the Bull Arab incredible speed, quick decision-making skills, and tracking ability. In fact, these dogs can track a wild pig from up to 6km away.

Of course, creating a new breed can be a challenging endeavour. As the Bull Arab became more popular with hunters and landowners trying to manage pig populations, Hodgen’s original breed crossed Bloodhounds with Mastiffs. This fragmentation of the breed created new lines, meaning that a Bull Arab in NSW could differ entirely from one in QLD. And, despite the efforts of those trying to standardise the breed, backyard breeders popped up in numbers. Soon, it became difficult to find a “true” Bull Arab.

Despite the bumpy road towards official recognition, the Bull Arab continued to gain popularity with hunters, farmers, and plenty of people looking for a family pet. Bull Arabs may not be well-known around the world, but they are an Aussie breed that has captured the heart of many families right here at home.

Firstly, we want to address the idea that Bull Arab’s are naturally aggressive dogs. As many Owners of the breed will tell you, these pups don’t deserve the reputation. In fact, there are many breeders who are working to make their puppies even more affectionate than the last generation.

As long as you give the Bull Arab proper training; socialisation; and a healthy, positive environment, you should end up with a well-adjusted doggo. Let’s take a look at some of the other unique characteristics that are common in the breed.

For one thing, Bull Arabs are working dogs at heart. And like many working dogs, Bull Arab dogs are amazingly good at toggling between working mode and family mode.

When it’s time to work, they are laser-focused, and will tune out all distractions to complete the task at hand. Fearless, powerful, and dedicated, Bull Arab dogs have a relentless work ethic.

Because they come from sighthounds and tracking breeds, Bull Arabs are constantly on the lookout for prey. That can make them dangerous around small animals like cats or wildlife, unless they’ve been properly socialised from puppyhood. And, until they’ve gone through proper recall training, Owners will need to keep their chasing habit in mind when outside. Leashes and enclosed areas are a good idea for the ever-watchful Bull Arab.

This dog’s alertness also makes them ideal guard dogs. With their strong hearing abilities, they will alert the family to anyone nearby. That said, the Bull Arab shouldn’t be overly territorial when you have houseguests. Once they see that a stranger is welcome in your home, a well-socialised Bull Arab should switch to a friendlier attitude. While they’re not usually overly affectionate with strangers, these doggos are polite and calm around newcomers.

With their family members, Bull Arab Dogs are incredibly loyal. They tend to follow in the footsteps of the Bull Terrier in being affectionate and dedicated to children, especially. And, don’t be surprised if this caring doggo follows you from room to room. They just want to make sure the entire family is safe, while also claiming their spot on the couch!

Getting along with other dogs can be a bit of a challenge for the Bull Arab. They can sometimes develop dog-oriented aggression that Owners will need to overcome with dedicated socialisation. Once they’ve gone through the proper training, they adore the company of other pups, and do well in a multi-dog family.

If you’re going to spend a lot of time away from home, your Bull Arab may become distraught—to the detriment of your home! But, they also may have a hard time adjusting to an overly crowded kennel, especially if they’re not comfortable around other dogs. The best solution is to find a dedicated Pet Sitter who can give this people-oriented dog some one-on-one attention.

One final thing that we’ll say about the Bull Arab personality is that it can be varied. It’s quite rare to find a true Bull Arab; most are mixed with a range of other breeds, from Great Danes, to Kelpies, to Rhodesian Ridgebacks. If possible, it’s a good idea to learn as much as possible about a dog’s background. That way, you can glean a sense of other breed influences on their personality.

There’s no way around it: Bull Arab dogs need a lot of training, as early as possible.

As you probably guessed, socialisation is the number one priority for the Bull Arab. Without it, they can become fearful and aggressive towards strangers and other dogs. So, make sure that they get plenty of opportunities to interact and play with friendly pups and people as early as possible.

And, given the fact that these dogs are often assumed to be aggressive, it’s crucial to train them well. The goal is that a well-behaved pup will put people at ease, thereby setting the stage for positive encounters.

The good news is, as people-oriented and ready to work as they are, training a Bull Arab dog will be an enjoyable bonding experience for dog and Owner alike.

Bull Arabs respond especially well to Positive Reinforcement Training. In contrast, overly harsh training methods can cause this dog to become defensive and stubborn. So, as you go through the basic command training, rely heavily on treats and praise. Some firm redirection may be needed with this pup, but in general, they just want to impress their favourite human!

And remember, the puppers are part sighthound. It’s best to train them in an area with few distractions, and make sure the training sessions are engaging enough that their attention won’t stray.

If you are struggling with behavioural issues such as aggression, don’t hesitate to call in the help of a professional Dog Trainer. This is one powerful pooch, and proper training is the best way to keep them and others safe.

To sum it up, here are a few key concepts for training a Bull Arab dog:

All of the Bull Arab’s parent breeds were energetic puppers. Greyhounds are amazing sprinters, while Pointers and Bull Terriers have always been known for their athleticism in the hunting field. So, you can expect that this dog has a lot of energy that will require proper exercise.

On the one hand, getting this dog enough exercise will do wonders for any behavioural issues. Regular exercise can be one component in dispelling aggression and anxiety in dogs, especially mentally stimulating forms of exercise like agility training.

Exercise is also key in preventing some of the more destructive behaviours common in the Bull Arab. When these pups get bored, they may dig up the garden, stick their snout in the rubbish bin, or start chewing on the furniture. As such, you should ensure they receive plenty of exercise to ward off boredom.

Luckily, with an enthusiastic pup like the Bull Arab, there are many ways to tire them out. They’re playful and task-oriented, making them especially fond of games like fetch and tug-of-war. And, with the right canine companion, these dogs will wrestle and run around until they’re tired and ready to cuddle on the couch.

Regarding living conditions, there’s a common misconception that these dogs are fine to leave outside in the yard. In reality, Bull Arab dogs don’t like to be alone and should never spend extended time outside unaccompanied. In their ideal world, they would prefer to be at the side of their beloved human or caring Dog Sitter.

​One of the easiest parts of owning a Bull Arab dog is the grooming. These puppers have a short coat that only requires brushing every couple of days with a deshedding tool. This will help to manage the amount of Bull Arab fur that ends up throughout your home.

Bull Arab dogs don’t need regular bathing, but you may want to rinse them off if they’ve rolled around in something stinky. And, as with all dogs, you’ll want to clean this pup’s ears, clip their nails, and brush their teeth on a regular basis.

It can be tough to generalise about the Bull Arab dog’s health for two reasons. Without standardisation, it’s difficult to pin down specific breed genetic dispositions. And, there’s also the issue of backyard breeding, which often occurs without proper health screening.

That said, Bull Arab dogs are typically healthy pups with a long lifespan. They may develop health issues that are common with other dogs of their size, such as:

Like all dogs with a highly active lifestyle, the Bull Arab should have a dietary plan that can keep up. Fresh dog meals with a range of vitamins and minerals are key to fueling this energetic pup and promoting rest between adventures.

Fun Fact about the Bull Arab ♥

Most pregnant dogs in this breed have litters of about seven to nine babies. In 2017, though, one Arab Bull mix named Girl wowed everyone with a litter of 20 puppies!

As a mix of Bloodhound, Great Dane, and Arab Bull, it’s perhaps not surprising that Girl would be able to produce so many little puppers. Large dog breeds tend to have more puppies at a time than smaller ones, and Girl was a huge doggo!

Final Thoughts on the Bull Arab

This breed may be a mash-up of European and Middle Eastern hunting dogs, but we can proudly say that the Bull Arab is an Australian dog breed.

True, these puppers may not be the best fit for every household. However, the families who can give this dog the right environment are in for an amazing canine companion. Focused, ready-to-work, loyal, and incredibly smart, the Bull Arab has a lot to offer.

And don’t let that tough exterior fool you—this dog certainly deserves a place in the “velcro dog” group for their dedication to their Owners. In fact, if you’re going to be away, make sure to place this pup in the care of a friendly Dog Sitter who can give them the attention they adore.

With special care, early socialisation, exercise and training, the Bull Arab has the potential to be a wonderful pet.

12 Human Foods that Dogs Can Eat As Well

How Do I Stop My Kitten from Attacking Me?

Are there registered breeders of Bull Arabs?