Have you or your trusted Pet Sitter spotted your pupper wandering around at night and questioned whether they can actually see, or if they’re just fumbling around, hoping for the best? Our feline friends are famous for their awesome night vision, but can the same be said for our canine comrades? Have you ever wondered, “Can dogs see in the dark?”

To find out what’s really going on after sundown, we decided to dig into whether or not dogs can see in the dark. 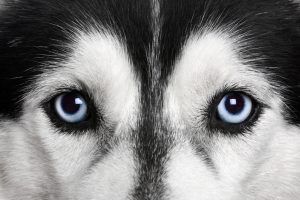 Can dogs see in the dark?

The answer to the question “Can dogs see in the dark?” is yes, kind of! Dogs can see pretty well in low light, but not when it’s really dark or pitch black.

To make matters trickier, dogs are also at a disadvantage when it comes to looking in the distance. Humans have 20/20 vision, while dogs have 20/75 vision. This means that from 20 feet away, dogs are able to clearly see something that humans can see from 75 feet away. In an open environment, a doggo might have even more trouble getting around if it’s completely dark.

Luckily, dogs have a keen sense of smell, fantastic hearing, and great skill in perceiving movement. These strong senses help pick up the slack when they’re navigating in absolute darkness.

However, it’s still wise to leave a light on when you go out at night to ensure your doggo can safely make their way around your home. This is especially true if you’ve left their dinner out. You wouldn’t want your pupper to miss out on their tasty and healthy dog meal just because they can’t see it!

How can dogs see in the dark?

A dog’s ability to see in low light is all to do with the structure of their eyes. Dogs have bigger pupils and retinas than humans, which lets their eyes absorb more light. Like humans, though, dogs have two different receptors in their eyes that allow them to see: cones and rods. Cones are responsible for deciphering colour, while rods detect variations in light.

Dogs have more rods than humans, which is why they’re able to see better at night. Humans, on the other hand, have more cones than dogs. This is the reason we see in full colour and they see in duller tones. (If you’re wondering if dogs are colourblind, they’re not – that’s a bit of a myth!)

Dogs also have a nifty membrane at the back of their eyes called the tapetum lucidum. The tapetum is a bit like a mirror. It takes any light not absorbed by the rods and reflects it to the dog’s retina, which allows their eyes to let even more light in. Fun fact: the tapetum is the reason why a dog’s eyes appear to glow in the dark when you shine a light on them at night!

Can some dogs see in the dark better than others?

There’s no evidence that certain dog breeds have better night vision than others. The ability to see in the dark comes from when dogs still lived in the wild and hunted their prey. At the time, they could only navigate and hunt at night using moonlight to guide them. As a result, dogs’ eyes evolved so they could see in low light – and this ability has been inherited by all kinds of dogs.

In saying that, there are certain breeds that have better overall vision or are less prone to eye problems. Labradors, for example, have fantastic eyesight. This is why we use them as seeing-eye dogs. Greyhounds have good peripheral vision and Great Danes can see from a taller height than, say, Maltese terriers. This means they can scan a dark environment much more easily.

A dog’s eyesight also tends to get worse with age. Many dogs get cataracts, or their eyes simply start to degrade. The age that vision deteriorates varies between dogs and also depends on things like a dog’s breed, prior illness or injury, and genetics. Fortunately, there are a few ways you can provide decent eye protection for your dog. Doing so may help reduce their risk of future eye problems.

Do dogs have the same night vision as cats?

Ah, it’s a battle as old as time. In the fight between cats and dogs, puppers have a few advantages over kitties: you can walk them more easily, they don’t require litter boxes, and they tend to be better at playing fetch.

Bad Dog Breath: How to Get Rid of It

Grain-Free Diet for Dogs: Good or Bad for...

Bright Dental for Dogs: What’s All the Hype...