Even if you live in a high-rise in the centre of the city, your doggo may still act as if they’re living on a farm in the countryside. Instead of herding livestock, though, city dogs are herding birds at the dog park. Instead of barking at threats like foxes, they’re barking at the couriers that come to your door. And, instead of befriending small, talking sheep-pigs, they’re mostly loyal to their city-dwelling humans and favourite local Dog Walker.

Do these city dogs actually think they’re being helpful by rounding up pigeons or barking at strangers? To help you figure out your city dog’s behaviour, we decided to do a bit of digging. 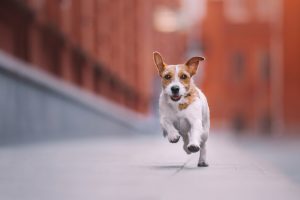 So, does my city dog actually think they’re a working dog?

In many cases, yep – especially if a city dog is a working breed. This is due to a combination of natural instinct and many, many, many years of being bred to perform certain duties.

Working dogs have a number of important responsibilities. Farmers often use them to help herd livestock, such as sheep and cattle. Farm dogs are also incredibly valuable because they help protect livestock and poultry from threats, like foxes. They’re also excellent at hunting vermin, including mice and rats.

Many dog breeds are employed for their sniffing abilities, like the Beagles you see at the airport. Other working Owners simply love the companionship that dogs provide – and who could argue with that?

Some dog breeds are best for particular tasks, such as herding or guarding. Let’s take Border Collies, for example.

Like other herding breeds, they have a natural talent for herding other animals by directing their movements. Importantly, Border Collies aren’t intimidated by animals bigger than them, which is crucial when rounding up cattle or sheep. They’re also bursting with energy and have a strong work ethic, so they’re a fantastic addition to any livestock farm.

Not all working dogs will engage in this kind of behaviour. But many will if they have the natural inclination to do so. If a dog that’s traditionally been bred for its working abilities is living in the city or suburbs, it will most likely still think it’s a working dog. That’s because the behaviour is so deeply ingrained and has been cultivated by humans for so long.

However, this isn’t always limited to working dogs. While many breeds have been raised for human companionship more than anything else, they often retain their natural instincts.

Chihuahuas are prone to hunting small vermin, which is an ingrained behaviour that ancient Chihuahuas used to find food. We also know Chihuahuas often love barking at strangers because they’re incredibly territorial. (We doubt these tiny balls of fur would stand much chance ordering around a cow, though.)

There are certain breeds that have been bred for duties like herding, hunting pests, guarding, and sniffing out crime or illicit substances.

If you already own one of the breeds listed below, you may find that your city dog is more likely to engage in working dog behaviour. If you’re thinking about getting a dog, you’ll want to consider whether a working breed is right for you. Some herding dogs are known to fulfil their basic needs by rounding up children instead of sheep. So, if you have small kids, a Border Collie or Blue Heeler may not be the best choice.

Some of the most common working dog breeds include:

It’s important to remember that even if a dog is a working breed, they may not always be fit for the job. Breed is a strong influencing factor in a dog’s behaviour, but it also comes down to the individual dog. In fact, a number of working dogs are sadly rehomed because they don’t live up to breed expectations.

Certain dog breeds are well suited to living in an apartment or suburban home. Some of the best city dogs include:

If my dog is acting out, what can I do?

Whether they’re a city dog or working dog, most doggos are likely to engage in primitive behaviour at some point. Dogs are smart creatures, and they need regular mental and physical challenges to meet their needs.

For working dogs, this is easily done. With lots of space to run around and duties that require both their smarts and their athleticism, Owners usually need not go out of their way to provide extra amusement.

If you have a city dog, you’ll need to give your furbaby the right stimuli to satisfy their instincts. This is particularly important if you own a working breed. Otherwise, your dog can start getting destructive, chasing cars and motorbikes, relentlessly barking, or digging holes under fences and escaping.

So, if your dog is indulging in a few unsavoury behaviours, there are several ways you can handle the situation.

If you get a working dog as a puppy, early obedience training can help smooth out behaviours like hunting or herding. For example, the trick ‘leave it’ is a great way to take your dog’s attention away from a potential target. ‘Sit’ and ‘lie down’ are ideal if you want your dog to stay calm when a target comes near.

Ensure they get plenty of exercise

Herding dogs are used to running around a lot, so you’ll want to ensure your doggo gets adequate exercise. When it comes to walks, your dog might need two or three per day to burn all their energy. They might also require a good run around the dog park and several rounds of fetch before they’re completely zonked.

Indulge in some scent games

For dogs with a keen sense of smell, it’s important that you stimulate it. Regular walks are good, but make sure you try new routes to expose your pupper to different aromas.

You can also play scent games with your dog. Hiding treats somewhere in your home can be a really fun game as they try to sniff out their food. Moving their dinner bowl to a different spot every day is another way to challenge them. There are also numerous dog toys you can buy that help excite a dog’s sense of smell.

Use stimulating toys and puzzles

Puzzles are a great way to help flex your dog’s mental muscles. Most incorporate small chambers with hidden treats, which are perfect for making your dog work hard. A food puzzle is especially handy if you own a scent dog, or if your pupper is very food motivated.

Toys like ball launchers, frisbees, and tennis balls are perfect for expending your doggo’s energy. They also allow your dog to engage in chasing behaviour. Tug-of-war can also be good exercise that provides a bit of mental stimulation.

Take them on country vacations

If you’re going away, you could consider taking your furry friend along for the ride. There are many benefits to taking city dogs to the country, including introducing them to a new and invigorating environment, giving them a bit more space to run around in, and allowing them to indulge in some of their most primitive behaviours.

Is My Dog Trying to Tell Me Something?

Is Rough Play Between Dogs Safe?

Does My Dog Need Shoes?

Do Dogs Get Depressed?