A small dog without any inkling of their own size, the West Highland White Terrier is truly giant at heart. In this Dog Breed Corner, we learn more about the Westie’s personality, exercise needs, and grooming requirements. And for the best Westie-friendly Pet Sitters in Brisbane, Wollongong, and anywhere else, look no further than Mad Paws! 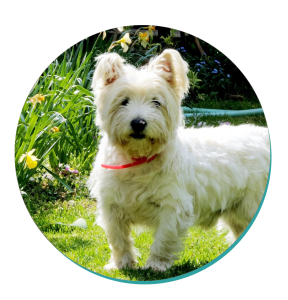 Like all terriers, the West Highland White Terrier was bred to spend much of its life in the dirt. It’s a bit surprising, then, that this dog would sport such a seemingly inconvenient coat colour! So, what is the story behind this white terrier? Who decided on such a long name for such a small pup? And how has this dog’s role gone from fearless hunter to beloved family dog?

The good news: you won’t need to read any dry 18th-century hunting books to find out.

The Westie hails from a family of Scottish dogs (other well-known members include the Skye, Dandie Dinmont, and Scottish Terriers) originally bred to manage rodent populations around country homes and barns. These outgoing little dogs were the front line when it came to flushing out rats, weasels, and other unwanted scavengers. And, when hunters saw the bravery of these pint-sized puppers, they decided to bring them into the field as well.

Soon, all of the terriers in this Scottish group began to flush out burrow-dwelling forest animals like foxes and badgers. In fact, these furry first strikers arrived on the scene before the larger hounds, which required plenty of courage! They never quite knew what was going to be waiting for them when they dove face-first into a den.

However, there was a fatal flaw in this hunting scheme. Tragically, hunters would sometimes mistake these red, brown, or black terriers as the wild animal they were hunting. In one such instance, a man named Colonel Malcolm of Poltalloch mistakenly shot his furry friend, thinking they were prey. To ensure no such tragedy could ever strike again, Colonel Malcom set about creating a white terrier. By doing so, he aimed to create a dog who would stand out, no matter where the hunt took place.

The trick worked. Hunters were able to see Westies from far away, and even non-hunting dog fanciers took notice of the breed. By 1907, the first West Highland White Terrier entered in the prestigious Crufts dog show in London.

Of course, to earn inclusion in a dog show, your breed needs to have a name. And the breeders of these dogs tried out a few. Before they became Westies, the dog bore the name Poltalloch Terrier, after the breed’s founder. Another option was the Roseneath Terrier, after a castle in the region where this terrier first sprang into existence. In the end, the more general name West Highland White Terrier won out. It doesn’t exactly roll off the tongue, but it honors the large territory that the early Westies called home.

Eventually, this daring doggo would no longer serve in pest extermination or hunting. Even so, the Westie wouldn’t go out of fashion. Instead, dog lovers recognised their potential as wonderful companion pets, and invited them inside to snooze by the fireplace. Today, you can find the West Highland White Terrier all over the world.

Affable, outgoing, and always up for adventure, Westies are the extroverts of the dog world. Thanks to their long history as the little guys in the hunting pack, this doggo knows how to make an impression, and they’re not afraid to run with the big dogs!

West Highland White Terriers are, after all, terriers. As such, they have a few of the characteristics that are typical in this breed group. A touch of stubbornness. A flair of mischievousness. And, more than anything else, a love of chasing and digging. These qualities can present some challenges, but they also give this dog a quirky, loveable personality.

Regarding other dogs, Westies should undergo socialisation early, because some can develop aggression towards dogs of the same gender. Prey drive is also high in this breed; with this in mind, Owners should take extreme care when introducing this dog to cats or other small animals.

In the right circumstances, the West Highland White Terrier can be a good family dog. However, because they can sometimes lose their patience, they might not be appropriate for young children. For kids old enough to understand and respect their boundaries, Westie and child will be in for a years-long friendship. Westies love to have a high-energy companion who won’t tire of playing with them.

And, while it was never part of the job description, Westies make excellent watch dogs. They are vocal and alert, and your guests might be surprised to see such a little pup making such a big fuss at their arrival. That said, these doggos aren’t typically territorial. They’re generally polite with newcomers and their local Pet Sitters, but won’t always provide an overly warm welcome. First and foremost, these pups commit themselves to their beloved Owners.

First-time Dog Owners might feel overwhelmed by this big personality. Even so, the fun, joy, and affection that Westies bring to their humans’ lives make it all worth it.

With their strong personality, you’ve probably already guessed that the West Highland White Terrier is a bit challenging to train. They’re easily distractible, self-assured, and energetic. So, it can take some patience and dedication to train them properly.

But, as with all dogs, and terriers in particular, training is crucial. These dogs can range from bossy to border-line unmanageable when they haven’t received proper training.

As we mentioned, socialisation is a top priority. These dogs can live alongside children and other animals, but only when they’re able to build positive relationships as puppies. There are a few other habits, such as food and toy possessiveness, that Owners will best deal with in puppyhood.

When you’re ready for basic obedience training, recall skills are a good place to start. With a dog so eager to explore the world around them and chase anything that catches their eye, you’ll want to ensure they return when you call them. In fact, if you’re not confident in your Westie’s recall skills, it’s best to keep them on-leash in open areas.

From there, these little fluffers will be ready to move onto other basic commands. You can improve this process by training these dogs in a distraction-free setting and keeping sessions short and snappy.

Once a Westie has learned the basics, many Owners focus on reinforcing the most crucial commands without teaching new skills. However, these clever little pups learn to master complex tricks, develop their tracking skills, navigate through obstacle courses, and more.

It can sometimes feel like Westies are out to prove that they’re not small dogs. Indeed, they can be as athletic as any sheepdog. As alert as any watchdog. And as ready to run as any sighthound.

In short, they need exercise and play. Once they’ve been socialised, the perfect environment to tire them out is an enclosed dog park. Because, as much as these puppers love to chase, they may enjoy having other dogs chase them even more. Don’t recoil in surprise if your Westie is leading the pack or trying to entice the other (usually larger) dogs to join in a game of doggy tag.

A close second option for the Westie’s favourite outdoor activity is swimming. If it weren’t for their little legs, these dogs would be expert dock divers. They absolutely launch themselves into the water with reckless abandon. And, while they didn’t exactly evolve for swimming, they’ll gladly swim around for as long as you’ll let them. To give them an assist, you might think about investing in a buoyant doggy life saver.

When you give them the opportunity, Westies do a great job of tiring themselves out. If they don’t have an outlet for that energy, though, these doggos can become destructive. After all, Westies love to find their own fun, and won’t wait for their Owners to give them the go-ahead. Boredom plus their superior digging skills can also mean certain death for your outdoor garden. If you can’t take these doggos out to stretch those short legs, you’ll want to book a trusted Dog Walker.

When it comes to living conditions, this dog is small enough to live in a home of nearly any size. That said, they can be very vocal, and may disturb the neighbours with their bouts of barking.

You should also take special care with senior Westies who aren’t able to jump up on couches or climb stairs. We recommend doggy ramps for when your West Highland White Terrier starts to show signs of age.

​Back when they were hunting dogs, that white coat didn’t have to be pristine. However, the modern era calls for a cleaner Westie coat. So, there are a few grooming tasks to do regularly.

Westies have a double coat made up of a thick undercoat and a coarse outer layer. As such, you’ll need to brush them regularly with tools that can remove tangles and loose hair from both layers.

Regular care should also include cleaning of the fur around the eyes, as these white beauties can sometimes develop staining.

Professional grooming can give this dog a more fashionable cut or simply make their coat more manageable. If your groomer offers the service, you can ask them to “hand-strip” your Westie, a process of pulling out weak fur to promote healthy hair growth. Because hand stripping is a long, labour-intensive process, it’s often reserved for show dogs. Of course, whether you opt to trim or strip a Westie’s coat is a personal preference; either one can help your dog’s coat look great. You can expect to trim or hand strip a West Highland White Terrier about every six weeks.

Westie Owners can look forward to a long, generally healthy life with this sturdy pup. But, there are a few health concerns that can show up in the breed:

To make sure that your Westie is developing normally, it’s a good idea to have a vet monitor their progress. It’s also important not to over exercise them as puppies or adults, and provide them with well-balanced, high-protein dog meals to match their active lifestyles.

Sure, the classic Monopoly game board may have showcased the Scottish Terrier. However, the West Highland White Terrier was the brand ambassador for a more adult audience.

Black & White Scotch Whisky was first invented in London in the late 19th century. The man responsible for this revolutionary drink chose a Black Scottish Terrier and a West Highland White Terrier to appear on the label. For over a century, these distinguished doggos have remained a central feature of the brand.

The Westie has a personality that packs a punch. They’re loud, bold, rambunctious, and clever—all qualities that will either stress you out or lead you to fall in love.

Owners of this breed need to prepare themselves for a lengthy training process; a surprising amount of exercise for such a short-statured dog; and some behaviour challenges. In some cases, their short fuse can make them inappropriate in families with small children. And the grooming needs for a rough-coated dog like this can also be higher than average.

But if there’s one thing that a Westie can bring to their Owner’s life, it’s excitement. These dogs are adventure-lovers. They’re unique characters. And this is a promise: life with a West Highland White Terrier will always be interesting!

How to Train Your Dog to Ignore the Doorbell

7 Dog Breeds that Don’t Bark Much