In this new Dog Breed Corner, we cast our eye to a dog that’s as loveable as they are regal: the Cocker Spaniel. Learn all about the Cocker’s storied history, behaviours, quirks, and training requirements.  Do you currently have a Cocker Spaniel that needs a trustworthy carer while you’re away? Mad Paws has Cocker-compatible Pet Sitters in Melbourne, Perth, Hobart, and all over the nation. And for their meal time, you can source some of the best dog food around through Mad Paws Dinner Bowl! 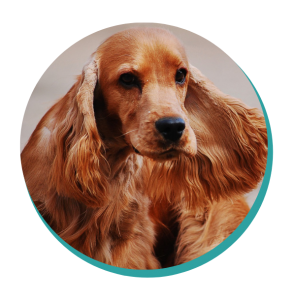 Given their sweet face and loving nature, you might expect that the breed has always belonged to royalty. However, the Cocker Spaniel springs from a long line of hunting dogs, which experts believe originated in Spain.

Exactly how far back this dog breed goes, we don’t know for sure. Some historians suggest that these dogs may have lived during Roman times. Even further back, a few very old Irish and Welsh law books from the 1st century make reference to the dogs, which were sometimes given as gifts to the king.

For much of their history, these dogs simply bore the name “Land Spaniels” or “Water Spaniels”. During this era, their humans trained them to either to flush game out from thickets and underbrush, or retrieve game from the water.

It wasn’t until later – likely around the 19th century – that the larger family of these handsome, wavy-haired dogs split into separate breeds.  Among them was the Cocker Spaniel, a dog uniquely effective in hunting an odd-looking little bird called the Eurasian Woodcock. This Land Spaniel descendant was so good at its job that humans would later take them to the United States to hunt American Woodcock. As settlers moved West, the Cocker Spaniel adapted to different kinds of ground fowl, such as Quail and Sage Grouse.

The English is a bit larger with a longer snout, and the American is a petite little doggo with a snubbed muzzle. Both have the signature long, silky ears and luxurious coats that skirt the ground.

Lucky for us, both versions of the Cocker Spaniel are popular here in Australia. It’s not clear when the English Cocker Spaniel made its way to our shores, but we do know that the American version was introduced during World War II.

Energetic, fun-loving, and gentle as can be, Cocker Spaniels are amazing companions. Their hunting days may be behind them, but these dogs will still be your steadfast sidekick. In fact, Cocker Spaniels prefer to be around their people as much as possible, making them excellent family dogs.

Outside of the family unit, things can be a bit more complicated. This breed tends to have a vein of nervousness and submission that will need to be addressed with care and patience. Without proper socialisation, fearfulness of other dogs or strangers can develop into aggression, nervous urination, and other behaviours that are no fun for you or your dog.

To counter this, it’s a good idea to expose your Cocker Spaniel to as many friendly dogs and humans as possible while they’re still young. That way, you’re more likely to foster the confident, calm personality that makes Cocker Spaniels such wonderful pets.

You might also find that this breed is prone to separation anxiety, a sign of their devotion and dependency on their beloved humans.

Unlike some dog breeds that tend to slow as they age, Cocker Spaniels will keep their upbeat attitude throughout their life. Having a senior Cocker Spaniel can feel like having a young energetic pup!

Cocker Spaniels aren’t one-size-fits-all when it comes to training. Some of them will be excellent students, always ready to follow commands and learn new tricks. Others have been described as stubborn, needing a little bit of extra time or incentives to stay engaged.

No matter where a Cocker Spaniel falls on the trainability spectrum, they all benefit more from positive reinforcement training than any other type of training method. Remember, these can be nervous little pups, meaning that their sensitivity trigger point is pretty low. Too many harsh reprimands can make your Cocker Spaniel go into panic mode, which will lengthen your training time.

The best plan of action with Cocker Spaniels is to take things slow, keep your training sessions short, and always give them plenty of verbal praise. No matter what, don’t give up! You’re dealing with one of the best hunting dogs in the world, and that star pupil is ready to shine if you can give them the right encouragement.

​Cocker Spaniels are highly adaptable dogs. Their size makes them ideal for smaller spaces, but they’re also happy to live in more rural settings, as well.

While they do love a good cuddle on the couch, one common mistake that new Owners make is to assume that these are essentially lap dogs, content to lounge their days away. On the contrary, Cocker Spaniels need to release that pent up energy. Otherwise, their nervous habits are likely to get worse.

There are two factors that will determine exactly how much daily exercise a Cocker Spaniel needs. On the one hand, it’s a personal preference—some doggos will naturally need more exercise than others.

And on the other hand, it depends on which kind of Cocker Spaniel you end up with. American Cocker Spaniels are more distantly removed from their hunting roots since they were bred mostly for show over much of the 20th century. They’ll be happy with a few walkies and trips to the dog park.

English Cocker Spaniels, though, are the more energetic of the two. Without at least an hour of moderate to vigorous exercise, they’ll be bouncing off the walls at home.

If you have a big beautiful outdoor garden, it will be even more important to make sure that your Cocker Spaniel gets their daily exercise. These puppers may not have been bred to dig, but they’ve picked up the habit all the same! Make sure to read up on our article How to Stop Your Dog Digging if you’ll be welcoming this breed into your family.

Both varieties of these cheerful pups can be vocal, so you might spend more time teaching quiet commands if you live in a quiet neighbourhood or apartment complex.

​That luxurious, flowing coat is what makes a Cocker Spaniel stand out, so you’ll want to keep it well-groomed and healthy. We’ll warn you now: grooming a Cocker Spaniel does take some regular work, but you can choose a cut that works best for your lifestyle.

The three looks that you’ll see on a Cocker Spaniel are the Princess Cut (aka the Best-In-Show Cut), the Puppy Cut, and the Traditional Cut (aka the Catwalk Cut.)

The Princess Cut is the one that looks flashiest and most difficult to maintain. And it is! This look requires the groomer to skilfully clip the top portion of the dog while keeping the lower portion perfectly floor-length. That wavy skirt is brushed out to maximise fluffiness and flow.

The Puppy Cut is the opposite of the Princess Cut. All of the Cocker Spaniel’s coat is clipped to a manageable short length to reduce tangling or matting.

Finally, there’s the Traditional Cut, a classy yet simple style that keeps much of the length without any fancy trimming. This cut is great for temperature regulation, and is probably most reminiscent of the Cocker Spaniel’s early life as a hunting dog.

All three cuts will require daily brushing to remove tangles and debris. Because these long, luscious locks attract all kinds of brambles and parasites, it’s important not to skip this daily routine, especially if your pup spends any amount of time in long grasses or underbrush.

Take this opportunity to check your Cocker Spaniel’s ears for infection or pests, as this breed is prone to issues in this area. It’s a good idea to wipe the ear canal gently with a clean, wet wipe about once per week, and keep an eye out for any changes in the skin colour or itchiness around the ears.

One amusing thing that all Cocker Spaniel Owners have in common: finding creative solutions to the inevitable “ear dip.” After all, those long ears are liable to pick up water from bowl, puddles, and even dew from your lawn. So, don’t be surprised when you see Cocker Spaniel Owners walking around with a rag in their pocket to wipe down the extra moisture!

If you’re looking for relief from the involved grooming routine, we’ve got good news: Cocker Spaniels don’t require frequent baths. That silky coat is naturally water-resistant, and dipping them in soapy water too often can strip them of their natural oils. Instead, keep bathing to a minimum: about once every three or four months.

Whatever style you choose for your Cocker Spaniel, think of grooming as a bonding moment for you and your pup. While this attention-loving pup will love the one-on-one time, grooming a Cocker Spaniel is more than just aesthetics. They need the extra effort to make sure that their coat isn’t just beautiful, but healthy, too.

As with trainability, there are a few variations in health concerns when it comes to the Cocker Spaniel.

Unfortunately, overbreeding during the 20th century introduced some health issues. That means that while some Cocker Spaniel lines have remained healthy, others are prone to the following conditions:

American Cocker Spaniels are also sometimes included in the Brachy Breed group, which can cause Brachycephalic Airway Syndrome.

While this breed has a relatively long doggy life expectancy, Cocker Spaniel Owners should be prepared for frequent vet visits. As we mentioned, some Cocker Spaniels are happy and healthy as can be. However, it all comes down to responsible breeding practices.

Throughout history, you can find hints of these loveable doggos scattered in some of Britain’s most famous works of literature. Both Geoffrey Chaucer and Shakespeare made references to Spaniels, suggesting the breed enjoyed renown in the 14th or 15th century.

Later on, Virginia Woolf would publish a biography of a Cocker Spaniel in 1933, and by 1955, the breed would experience another popularity boost with the classic Disney film, Lady and the Tramp. To this day, Lady serves as an example of the quintessential Cocker Spaniel: sweet, loyal, and gentle.

Final Thoughts on the Cocker Spaniel

Whether they’re traipsing through the fields during hunting season or prancing their way through the showdog circuit, the Cocker Spaniel knows how to make an impression.

Once revered as an excellent fowl-hunting companion, Cocker Spaniels never fell out of favour with the general public. In fact, until recently, they were ranked as the most popular family dog in multiple countries.

Their friendly, cheerful attitude, adaptability and social skills make this dog an obvious choice for families. But, as much as this dog can offer, they have a few requests.

Dog Owners should socialise this dog early and ensure they get a good amount of daily exercise. Even so, they may still have some nervous habits that will need to be addressed with care and patience.

Grooming can be a bit time-consuming, but you won’t struggle with this affectionate little pup. And, with proper styling, your Cocker Spaniel is sure to be the centre of attention at the dog park.

Health concerns are high with this breed, although not guaranteed. You may get a doggo without a single issue, while others can be a regular at the vet office. As such, would-be Owners should prepare themselves for the health needs of their Cocker Spaniel.

Overall, if you’re looking for a compact doggo filled to the fluff with personality, you’ll love this breed. Cocker Spaniels are affectionate, loyal, and a joy to be around.

Top 5 Socially Distanced Activities You Can Do with Your Dog

Australian-Made Dog Food: Why It’s Among the World’s Best