You can recognise the German Shorthaired Pointer by their adorable spots, distinguished pointing stance, and all around wonderful personality. Learn more about this dog’s history, health, and exercise needs. 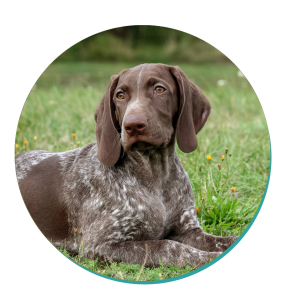 The GSP may be a bird dog at heart, but don’t be mistaken. This dog was bred to be an all-round versatile hunting companion, and their modern-day range is the result of generations of careful breeding.

The first time that German Shorthaired Pointers show up in the records in Germany is around the second half of the 19th century. But, the bird dogs who preceded the GSP have a much longer history.

As early as the 1600s, dog fanciers throughout Europe set about breeding a canine companion for gun hunting. However, just like the technology of the hunting rifle had a long way to go, these early working dogs were far from perfect. One hunter may have a dog for pointing, another for flushing, and a third for retrieving. Attempts to consolidate the work were not often successful.

By the 1700s, though, dog breeders in Germany had made major headway in the search for the ideal fowl hunting dog. Through generations of trial and error, they finally hit upon a dog who could track, point, flush, and retrieve. With the help of Spanish Pointers, Bloodhounds, and a variety of other breeds, they developed the German Bird Dog, generally considered the direct predecessor to the German Shorthaired Pointer.

The German Bird Dog still wasn’t entirely satisfactory to the hunting community. For one thing, they were a bit slow, and dog fanciers turned up their noses to the physical Bloodhound characteristics that were present in the breed. A few generations later, and the introduction of English Pointers finally produced what they had been looking for: the first litter of German Shorthaired Pointers.

Not only could these dogs perform all of the tasks that a gun hunter needed, but they also had the bravery and agility to corner larger game such as deer and wild boar. Later on, they would become skilled at taking on American game, such as raccoons and possums.

In 1872, the first GSP was registered with the German Kennel Club. The breed was an instant success, winning competitions across Europe. To this day, they continue to be one of the most popular dog breeds for hunters and families alike.

Obviously, the German Shorthaired Pointer was bred for one thing: hunting. But, dog fanciers considered good temperament to be a core necessity for the breed. These dogs had to perform well on the hunt and also be gentle, loyal companions at home.

These dogs are true people-pleasers. They are affectionate and loving with their Owners and aren’t likely to understand the meaning of personal space. Because they were trained to be with their Owners the majority of their lives, they can develop separation anxiety and would prefer not to be left alone. For GSP puppers who struggle with loneliness, a local Pet Sitter can be a good option.

When it comes to young family members, German Shorthaired Pointers are a favourite for kids old enough to keep up with their rambunctiousness. When properly trained, these dogs can be gentle and patient with very young children, but they would really prefer to romp around with older kids.

Because they were bred to have a high prey drive, socialising them to get along with cats and other small animals can be a challenge. It is possible if they’ve grown up around tiny furry friends, but you should practice caution when introducing adult GSPs to small animals.

In general, huntings dogs like the German Shorthaired Pointer get along well with other puppers. They can sometimes develop aggression towards the same sex, which will require some training to overcome.

GSP dogs are among the smartest doggos you’ll ever meet. And with the nose of a hound, they can get into plenty of trouble when you’re not looking. Luckily, though, they’re staunch rule-followers and never want to disappoint their beloved Owner. That’s not to say they can’t have something of a stubborn streak. But with regular mental stimulation and exercise, they shouldn’t develop bad habits at home.

A lot of the German Shorthaired Pointer’s skills are inherent. However, they’re also amazingly trainable dogs. Even the most trainable puppers, though, can benefit from a personalised training program. Here are a few tips to train a GSP:

Training will only get you so far with a German Shorthaired Pointer. If you really want them to be well-mannered and happy, they need a lot of exercise.

By a lot, we mean a baseline of one hour of exercise per day. This may not be enough for some energetic GSPs, but don’t worry, they’ll let you know if it’s time to increase the exercise routine.

How can you tire out this seemingly tireless working dog? Luckily, they respond well to many different activities:

We will discuss the risk of bloat in the health section, but it’s important enough to mention more than once. This pupper needs a highly nutritious meal plan for dogs to keep up with their energetic lifestyle. But it’s recommended not to feed them within an hour of heavy exercise to lower the risk of this life-threatening disease.

In terms of living conditions, it is possible to have a happy, healthy GSP in an apartment. But, this is not the most well-suited dog for a small space. They’ll need plenty of outside time and exercise to keep them from bouncing off the walls. Additionally, they’re pretty vocal doggos. You might find that, even if your pup is content, your neighbours may still be opposed to your dog living in an apartment complex.

If they do have access to an outdoor space, be mindful about having dog-proof fences. German Shorthaired Pointers are velcro dogs, but they can’t help but follow their nose if they sense something interesting is nearby. Remember also, that this is a dog who needs mental stimulation. If you leave them alone outside, you might come back to a ruined garden and a backyard filled with holes.

Inside, make sure that all food items are securely stored. A clever pup like the GSP can pinpoint a tasty target with ease and gobble it up before you have a chance to catch them.

​Don’t let the “shorthaired” description fool you; the GSP does shed. And thanks to their light and dark coat, their fur is going to be visible pretty much everywhere. But with a regular grooming practice, you can easily keep it under control.

The best way to care for the German Shorthaired Pointer’s double coat is to brush it every couple of days. You can do this with a rubber grooming glove or deshedding tool to pick up loose fur.

As far as washing goes, give them a bath every two to four months, depending on their lifestyle and skin sensitivity. Bathing can help keep their coat shiny and cut down on shedding.

Other than that, GSPs need the grooming basics: teeth cleaning, nail trimming, and checking their ears, especially after water play.

With an average lifespan of up to 14 years, the GSP is a pretty healthy dog for their size. They do have some medical concerns that Owners should know about:

It should be mentioned, as well, that this dog’s intense lifestyle can put them at higher risk for injury. In general, GSPs are very agile and light on their feet, but accidents do happen. Make sure they have a trusted pet insurance plan for any mishaps or health concerns.

Even if your German Shorthaired Pointer is never formally trained for hunting, you might see them “point” from time to time. This is an inherited trait that appears whenever they sense that a bird or other small animal is nearby.

You’ll know that your GSP is pointing if they suddenly freeze, pull one front paw close into their chest, put their tail straight back and point their snout in the direction of the prey.

Training leads to a more formal stance and ability to hold the point until the hunter releases them. But the average family GSP might just point whenever instinct takes over!

The GSP is one incredible hunting dog. They’ve been carefully selected to be brilliant trackers, steadfast pointers, and reliable retrievers. Thrown in the mix is their lovable family-friendly attitude.

It’s this last trait that makes the GSP such a popular pet today, but it’s important not to forget that they’re a working dog through and through. Without the right outlet for their hunting drive, they can become quite difficult to handle.

With training, socialisation, and a lot of exercise, a German Shorthaired Pointer is an absolutely amazing furry friend!

How to Train a Dog to Herd