Is it a domestic polar bear? No! It’s the Great Pyrenees! Learn all about this fluffy pup’s history, personality, and grooming needs. Do you have a Great Pyrenees who Great Pyre-needs some care? Through Mad Paws, you can connect with Pet Sitters in Bendigo, Darwin, Adelaide, and all over the place! 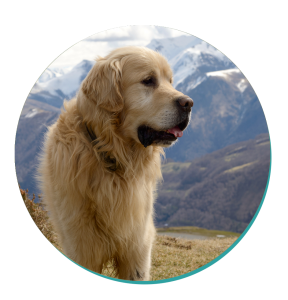 Country of origin – France and Spain

If you were a sheep living in the Pyrenees Mountains in the 17th century, you’d probably be pretty relaxed at the sight of the giant, fluffy Great Pyrenees dog. That’s because these puppers were tasked with herd guarding, and they were big and bold enough to fight off bears, lynx, wolves, and even livestock-thieving humans.

To be sure, it was not an easy job. The mountainous region between France and Spain is rugged and cold, and these dogs worked without a watchful guide to help them make decisions. But, the Great Pyrenees had hundreds of years of practice. It’s believed that the breed first arrived in the region as early as 3000 BC!

For much of their existence, these great white fluffers were considered to be peasant dogs. Not many people knew about them outside of their mountain villages, and they were content to live out their pastoral duties in peace. But, when a French royal decided to use a few Great Pyrenees to guard his country castle, the pup became an instant trend.

Soon, aristocrats around France were buying up these big dogs, and by 1675, King Louis XIV named the Great Pyrenees the Royal Dog of France.

In 1824, French-American revolutionary Marquis de Lafayette would introduce the breed to the United States. And just a few years later, dog-loving Queen Victoria of England would adopt a Great Pyrenees for Buckingham Palace.

Today, these giant dogs aren’t relegated to the royal life. In fact, they always seemed to prefer their previous role as outdoorsy watch dogs. You’re most likely to find them in country settings, although they are pretty popular family pets, as well.

For those unfamiliar with the Great Pyrenees (Pyrs for short), their personality traits are a bit of an enigma. These dogs have the features of a Golden Retriever without the openly friendly attitude towards strangers. They’re impressively large, but gentle with small animals and children. And, 95% of the time they are stoic and quiet, but can turn on a dime if they feel their territory is being threatened.

Of course, this has everything to do with their herd-guarding past. These dogs were bred to be problem-solvers, attentive to the herd, and not afraid to confront an enemy.

In a family setting, they are loving and loyal, and never want to be separated from their flock. If they’re not curled up in the cuddle zone (i.e. directly on top of you), they’re probably sitting in a part of the room that will allow them to keep an eye on everyone. When they can’t be with their flock all the time, these gentle giants can develop separation anxiety.

With children and small animals, the Great Pyrenees is gentle and patient. In fact, they’re one of the only dog breeds recommended for households with cats! To be sure, this harks back to their role as protectors of fluffy little lambs.

When it comes to other dogs, these pups are generally easy-going and friendly. That said, males can sometimes develop dog aggression and will need proper socialisation and training to get along with all furry friends.

Remember, also, that Pyrs are protectors at heart. They sometimes need to be taught how to behave around houseguests; otherwise, their guarding instincts will kick in. If you’re looking for a dog who can keep your home safe from intruders, the Great Pyrenees is definitely the pup for the job.

Finally, because these dogs were used to being responsible for their flock, they are independent thinkers and can be quite willful. When outside, they are generally kept on a leash because they have a tendency to wander.

For anyone accustomed to training a people-pleasing dog, the Great Pyrenees will certainly be a challenge. For the best chance of success, it’s important to tailor your training methods to the unique characteristics of this breed. Here are a few examples:

All dogs need training, but it’s especially true for a dog of this size and temperament. While training a stubborn dog like this can be a challenge, it is absolutely necessary for a polite, friendly adult Great Pyrenees.

If you were to take a look at a Pyr at random moments during the day, you might consider this to be a low energy breed. It seems like all they do is sit around! That is partly true, but there’s more going on here than meets the eye.

When a Great Pyrenees is sitting still in the shade of a tree, chances are, they’re not resting. Instead, they’re using a ton of mental energy and focus to make sure the coast is clear. And, when the need arises, you’ll really see how athletic this dog can be. When triggered, these dogs are incredibly fast and strong. That blur of fluff is a sight to behold!

So, how can you best exercise a dog with this kind of energy? For one, you’ll want to make sure that they get plenty of mental stimulation. This could be as simple as allowing them to spend part of their day in the backyard or by the window overlooking the street.

A daily walk is another great way to provide this dog with some mental exercise. They probably won’t walk too fast, but you can be sure that their brain is in overdrive taking in all the sights and sounds. If you can’t get your pup out for a walk every day, consider calling in the help of a friendly Dog Walker.

Trips to the dog park or dog beach can also provide this dog with some much-needed mental stimulation. They may not actively play with the other puppers (unless there’s a dog of their size who wants to wrestle!), but they enjoy sniffing around at their leisure.

If you’re looking for more athletic ways to exercise this dog, there are some options that Pyrs respond well to. Cart-pulling or drafting is a good option for this bulky dog. And, although they may not be fast enough to compete, some take well to agility and obstacle course training.

In terms of living conditions, this is not an apartment-friendly pup. Not only are they too big for a small space, but their guarding instincts will probably lead to problems with the neighbours. Instead, they are best suited to homes with ample outdoor space. And, as we mentioned, they have a penchant for wandering, so outdoor areas should be safely enclosed.

As far as climate goes, these dogs were bred to be comfortable in the cold Pyrenees mountains. That’s not to say that they can’t live in warmer regions, but Owners should be careful about heat exhaustion during the summer months. And while shaving them may seem like a smart option, their thick coat actually provides some natural temperature regulation. Instead, it’s better to provide them with fresh water and a cool place to relax when the temperatures rise.

​These dogs are known for their gorgeous, luxurious coat, which can come in pure white or with splashes of tan and grey. And, if you assumed that a coat like that takes some work to maintain, you’d be right.

Weekly, you can expect to put in about thirty minutes to an hour of brushing and combing at home. This should be done with specialised tools that can break up tangles in their long outer coat and prevent matting in the downy undercoat. It’s better for you and your pup to put in a few minutes of brushing everyday than wait until the weekend.

Not only will regular brushing keep this dog looking amazing, but it can also help with their heavy shedding habit. And, about twice a year, you can expect a Pyr to blow their coat as they get ready for the summer or winter. During this time, they will shed more than usual, so keep the grooming tools on hand!

The good news is that bathing is only a seasonal ordeal, and your Great Pyrenees shouldn’t be bathed more than every three months. In between, that thick coat is naturally dirt-resistant and won’t trap much of a doggy smell. To make this dog’s coat even more luxurious, make sure they’re on a nutritious meal plan for dogs with shine-boosting vitamins.

Other grooming tasks include checking their ears, trimming their nails, and brushing their teeth regularly.

Many of the health concerns associated with the Great Pyrenees are what you would expect from any large breed dog. For instance, these dogs can suffer from hip dysplasia, patellar luxation, and bloat. Because of their large size and low metabolism, your vet may also take special precautions when it comes to anesthesia.

In addition, they may suffer from some eye problems such as entropion and cataracts.

While Great Pyrenees dogs are typically healthy and strong, they do have a pretty short lifespan. To make sure you can enjoy as much time as possible with your Pyr, give them a healthy lifestyle and diet, and put them on a pet insurance plan so that they can get the best vet care possible.

Most doggos have adapted to our diurnal lifestyles. They sleep at night and are ready for adventure during the day. But that’s not usually the case with the Great Pyrenees.

These dogs have a long history of nocturnal activity; they’ve adapted to be more alert when predators are most likely to threaten the flock. So, it’s quite common for your big fluff to stay up at night to make sure their beloved Owners are safe from harm.

Final Thoughts on the Great Pyrenees

The appeal of the Great Pyrenees is obvious. Who wouldn’t want a huge, cuddly polar bear right in their home? Plus, they’re wonderful with kids and cats, and will keep your home safe at all times.

But, as is always the case with working dogs, this pupper isn’t low maintenance by any means. They need early, consistent training and socialisation. Without it, they can be aggressive towards houseguests, strangers and other dogs. And without a large outdoor space, daily exercise, and mental stimulation, they’re bound to get bored. A dedicated Pet Sitter may also be necessary to help this dog deal with separation anxiety.

If you’re able to provide the right environment and leadership for this fluffy pupper, the Great Pyrenees is a wonderful companion!