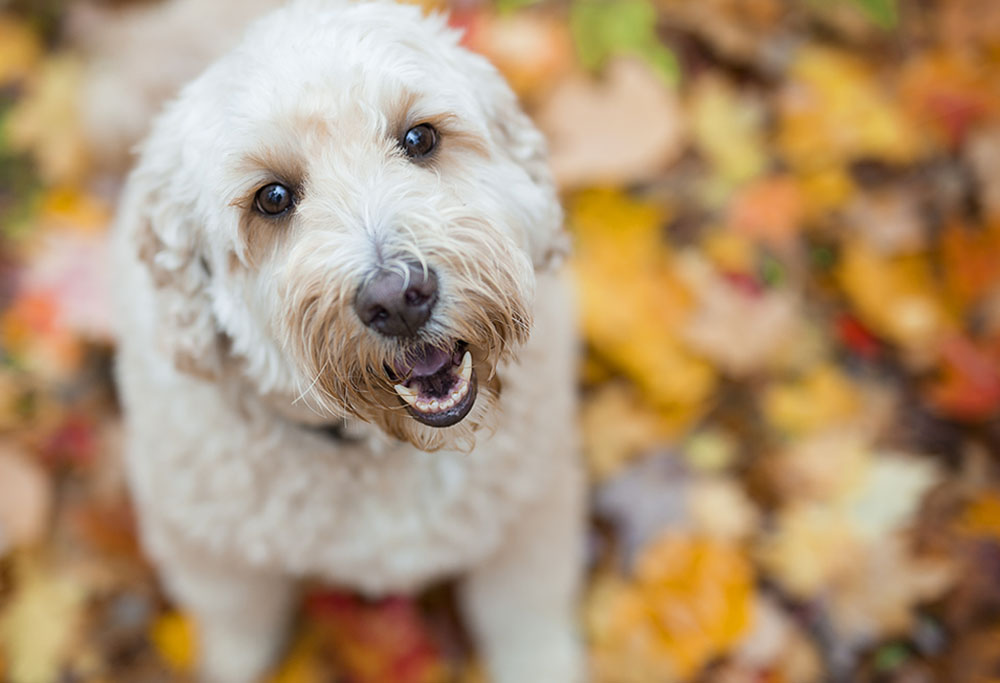 This Dog Breed Corner is the Labradoodle! Check out the Labradoodle’s stats, personality, trainability, health, grooming and more. Need a Pet Sitter to give some loving care to your Labradoodle? Take a look at some of Australia’s best Dog Minders!

Labradoodles may be a relatively new breed but they’ve quickly won the hearts of Dog Owners worldwide. This adorable doggo is what we call a designer breed – a cross between two desirable dog breeds. In this case, you have the loveable, friendly, happy-go-lucky Labrador crossed with the smart, poised Poodle.

It all started right here in Australia in the late 1970s with a man named Wally Conran – a breeder with the Royal Guide Dog Association. His goal was to breed a dog for a couple in Hawaii who had sent a request for a hypoallergenic guide dog. Up until that point, Labradors were the favourite when it came to guide dog breeding. With their loyalty and gentle demeanour, Labs made the perfect companions for the visually-impaired. But, if you’ve ever come into contact with a Lab, you’ll know that they are as quick to love as they are to shed, making them a less-than-ideal option for anyone with allergies.

What Conran set out to do, then, was to find a way to keep the positive personality traits of the Labrador but tone down the dander in their coat that contributes to allergies. From that first litter, he sent three different coat and saliva samples to the couple in Hawaii, and one of those cute little doggos passed the test. Sultan was trained and sent to live with his new family in Hawaii, and the Labradoodle breed was officially born.

But the story doesn’t end there. Breeders Tegan Park and Rutland Manor worked to make the breed more predictable and consistent. They introduced many different breeds into the mix – Cocker Spaniels, Irish Water Spaniels, and Curly Coat Retrievers – in their search for allergy-friendly coats and overall great personalities.

This is a breed that is still in development, but we’re likely to see a standardisation in the coming years. The Australian Labradoodle Association predicts that before long, they’ll have a breed with three size standards and formal recognition.

That said, we can talk about the traits that you’re likely to find within the Labradoodle community. Then, you’ll have the wonderful job of learning more about your unique Labradoodle’s characteristics.

Labradoodles are the perfect blend of intelligence and friendliness. The genes from their Labrador parents makes the Labradoodle easy-going and always willing to work. Their love for their Owners and people-pleasing personality makes them the ultimate companion for anyone.

On the other side, you’ve got a dog that is an unbelievable mix of intelligence, grace and goofiness. The Poodle is known as the dog that prances beautifully one moment only to fall all over their own paws the next. Perhaps it’s because they always want to see a smile on their Owner’s face and be the centre of attention.

What you get with the Labradoodle is a dog that is gentle, kind, loving, and attentive. Indeed, the perfect companion for anyone in need of a service dog, but also for anyone who just wants a lifelong companion that is a pure joy to have around. As puppies, Labradoodles can be very boisterous (no surprise there!) and will need a lot of attention and playtime. This is the perfect point to start obedience training and socialisation so that your pup knows how to best channel that energy and follow the rules of the household.

When it comes to trainability, the only challenge you might have with a Labradoodle is the likelihood of a stubborn streak. With any intelligent breed like the Poodle, you’re bound to get a snippet of an attitude of “Well, why should I listen to you?”. Especially when it comes to the standard Poodle that can be more independent than other breeds, it might take some convincing to get your Labradoodle to buy into training.

Luckily, in most Labradoodles, the Labrador willingness to please helps to counter the Poodle independence. If you’ve got a good balance of the two breeds, you’ll be left with a dog that is both easy to train and eager to be trained.

Overall, training a Labradoodle is going to be a pretty easy task. It will take consistency and a lot of exercise to maintain their focus and energy levels, but you won’t get much resistance to training.

When tackling the task of training a Labradoodle, the best way to go about it is to establish a good relationship as early as possible. These doggos love to make the people they love happy, so it’s key that you put time and effort into creating that bond. You can do this through many different avenues: playtime, grooming, feeding, or cuddling up on the couch. Once you’ve established yourself as the human associated with all the good things in life, your Labradoodle will do just about anything you ask them to.

Because Labradoodles don’t tend to be shy or anxious, they will happily take on any challenge that you present them with. For this reason, training a Labradoodle can go so much farther than the basic commands. They love learning new things, and they’ll benefit so much from the mental stimulation that you can provide them by teaching them new tricks and games. One way that you might make your training sessions even more challenging and rewarding is by learning how to train your dog’s sense of smell. Labradoodles are the ideal breed for this kind of fun mental challenge. Other options include agility training, frisbee competitions, or dock diving.

Labradoodles need exercise, and you should consider a daily walk to be just a small part of their overall exercise routine. Remember, these doggos come from a long line of hunting and water dogs, so they love to fetch, chase, swim, and generally romp around in the outdoors.
If you can, get your Labradoodle to the dog park or set up regular doggie playdates so that your pup can get some socialization while expending their energy.
And during the warmer months, try to get your pup in the water as much as possible. It’s great exercise, Labradoodles love water, and it can help to protect them from heatstroke. A win-win-win, or a woof-woof-woof if you ask your Labradoodle.
If you’re able to give your dog as much exercise as they need, your living conditions won’t be as important to a happy Labradoodle. After all, this dog would much rather have you organize plenty of active playtime for them than provide them with a backyard space. And if they’re tired out, your Labradoodle will prefer to curl up right next to you anyway.
If there is one thing that you want to add to your home for more Labradoodle-friendly living conditions, get an inflatable pool for the backyard. They’ll love it!

The Labradoodle was initially bred to be a hypoallergenic, minimally shedding dog but this can vary widely, even within the same litter of pups. Some Labradoodles have tightly curled coats like a Poodle whilst others look more like a shaggy retriever. Some of these cute doggos are virtually non-shedding whereas others can shed as much as their Labrador ancestors. With this much variability, every dog will have slightly different grooming requirements. Depending on their coat, some may need minimal grooming. Others will need weekly brushing with regular clipping.

If your Labradoodle is on the Labrador end of the coat range, your grooming routine will be similar to what you would expect with many other dog breeds. Occasional brushing to keep the shedding down, a bath every now and again. Not too much else.

But if your Labradoodle has more of the Poodle-style coat, you’re in for a more intensive grooming schedule. You’ll want to find a reliable groomer to take care of the regular clipping. And you’ll need to put in daily effort to keep their coat pristine. This type of coat requires daily brushing. Unlike dogs with fur coats which shed, the curly Labradoodle coat is made up of hair which can mat and tangle just like a human’s. Establish a daily brushing routine with your Labradoodle to keep that coat clean and tangle-free. Check out our dog grooming tips & tools article to become an expert groomer for your Labradoodle.

One thing to keep in mind is that with this type of coat, it’s important to lay off the overwashing. A Labradoodle’s skin contains self-regulating oils that can be thrown off-balance with frequent baths. About once every 4 to 6 weeks is plenty. Anything more and you might have a Labradoodle with itchy, irritated skin.

Health +
Because this breed’s popularity has soared in the last few years, it’s crucial that potential Owners are mindful about where they get their Labradoodle puppy. That’s because when a breed becomes sought-out all over the world, the potential for irresponsible breeding practices rises as does the risk for genetic issues. We can all create a community of better breeding practices by becoming more thoughtful about where our puppies come from.
Although they are generally healthy dogs, Labradoodles could inherit typical diseases for either Labradors or Poodles such as Hip Dysplasia, Elbow Dysplasia, Epilepsy, Allergies, Diabetes and Hypothyroidism, amongst others.
Ear infections can also be a problem for Labradoodles, particularly if they are fond of swimming. Ears should be cleaned and checked on a regular basis and immediately after your dog has taken a dip. You can learn more about the symptoms and treatments for ear infections by reading our article on ear infections in dogs.
​

Fun Fact about the Labradoodle  ♥

Labradoodles are popular with celebs! Famous owners include Jennifer Aniston, Christie Brinkley, Tiger Woods, and Joe Biden.
And the breed hasn’t just won the hearts of our famous idols. These doggos have also made their mark on popular culture. The word “Labradoodle” has been added as an official word in the Scrabble Dictionary and is worth 15 points. And, in a new version of Monopoly, the Scottish Terrier has been replaced with a Labradoodle.
With this much attention, it looks like the popularity of the Labradoodle isn’t going to fade away any time soon.

Final Thoughts on the Labradoodle

There’s so much to love about this wildly sought-out designer breed. The Labradoodle is a fun-loving, energetic, goofy doggo that is sure to make everyone around them fall in love.

Because of the Labradoodle’s gentleness and intelligence, this dog is perfect for any family. They’ve been lauded as service animals and they are great for first-time Owners.

When you take a Labradoodle home, get ready for plenty of laughs. This dog needs a lot of exercise, and their goofiness will entice any human to get on their feet and jump in on the fun. Labradoodles are generally big fans of water and games that allow them to show off their hunting dog instincts: frisbee, fetch, and dock diving are absolutely ideal.

Grooming needs for a Labradoodle are high, especially if you’ve got a curly-haired pup. Be ready for daily brushing, routine clipping, and occasional baths to keep that coat in good condition.

And, as with any dog that is the product of purebred parents, it’s important to keep an eye out for genetic disorders. Make sure that you adopt your Labradoodle from a responsible source and that your vet does a thorough check to make sure your pup doesn’t suffer from any genetic issues.

Overall, this dog is an amazing choice for any Dog Owner. Bring one home and you’ll have a loyal, gentle companion for life.