Small family dog, or millennia-old Himalayan snow lion? After reading up on the Lhasa Apso, you can decide! Learn more about this ancient dog breed’s history, trainability, and exercise needs. Does your Lhasa Apso need a carer as amazing as they are? Search for Mad Paws Dog Sitters in Brisbane, Adelaide, or anywhere else in Australia! 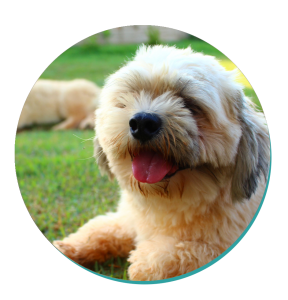 At first glance, you would never expect that this hairy little doggo would ever be at home in the rugged Himalayan Mountains. It might also surprise you that they were once lauded as guard dogs. This little pupper is hiding some amazing secrets, so let’s learn about the Lhasa Apso history!

It all starts in the mountainous capital city of Tibet and historical home of the Dalai Lama: Lhasa.

Sometime around 800 A.D., Buddhist monks in this region began breeding dogs to protect their temples. Outside, Tibetan Mastiffs were used to guard the perimeter of the temple. If anyone managed to get through that impressive line of defense, a small but mighty army of Lhasa Apso dogs were waiting inside.

Okay, okay, the Lhasa Apsos weren’t tackling any intruders in these sacred spaces. Instead, their job was to use that resounding bark to sound the alarm. In fact, an early name for the dog was Abso Seng Kye, which means Barking Lion Sentinel Dog or Bearded Lion Sentinel Dog.

Given that many Buddhist temples were constructed at high altitude, this was no easy task! It’s not easy to do simple chores at 3,600m, let alone keep up a chorus of barking. But, the Lhasa Apso was aptly suited for the job and the climate. They’re barrel-chested for better lung capacity, and their long fur protects them from the wind and cold. Even their dark, shaded eyes and black nose are advantageous in regions with intense mountain sunshine.

These little dogs weren’t just useful; they were also regarded as spiritual. Like the similar dog breed, the Shih Tzu, Lhasa Apsos looked like the highly revered snow lions of Buddhist imagery.

And, while the Shih Tzu would go on to warm the laps of the most powerful and rich families in the region, the Lhasa Apso would continue to live alongside the Tibetan monks for thousands of years. Each Dalai Lama was likely to have a number of these companion animals in his company at all times.

As spiritually important as the Lhasa Apso was, it was considered inappropriate to sell them. Instead, Tibetans viewed them as important gifts, bringing luck and prosperity to the recipient. This gift-giving tradition is why the Lhasa Apso would eventually spread to the rest of the world—a pair of these special dogs was given to American world traveler and naturalist, C. Suydam Cutting in 1933. Cutting instantly fell in love with the breed and set about establishing them with the American Kennel Club.

Today, the Lhasa Apso exists all over the world as a cherished family pet. With their stunning looks and lively personalities, they also do quite well in dog shows.

As we can gather from this dog’s past, the Lhasa Apso is a bold, brave, and outgoing pupper. They protect their home and family with everything they’ve got, and they’re not afraid to use that bark to show that they’ll never back down.

And they’re not shy. Lhasa Apsos move through life with self-assurance and unrivaled confidence. Dog Owners of this breed have to be careful that the Lhasa’s strong personality doesn’t bubble over into aggression.

But, once you break through that tough exterior, this dog is one big softie. Lhasa Apsos form strong bonds with their beloved humans, and as long as they’ve been properly socialised, they’ll happily let their guard down for houseguests, the groomer, and their dedicated Pet Sitter.

Because they have such a long maturation process compared to other dogs, Lhasas are puppy-like for longer than you might expect. If you want a dog who is goofy, enthusiastic, and curious about everything, the Lhasa Apso offers an infectiously youthful energy.

That said, while this dog has a cheerful puppy demeanour, they may not get along so swimmingly with children. Lhasa Apsos aren’t exactly patient when it comes to kids grabbing, teasing, or otherwise bursting their personal bubble. And, they will nip or lunge under pressure. Only when they’ve had early exposure to children can this somewhat sensitive pup build up the patience for toddlers and young children.

Likewise, the Lhasa Apso can be picky about other animals who share their territory. If they haven’t been raised around cats or other dogs, for instance, they will prefer to live in a one-dog household.

Not your average lap dog, the Lhasa Apso is all spirit and sizzle. They do an excellent job of guarding the home and an even better one at keeping a smile on their Owner’s face with their amusing antics.

While they are intelligent enough to be great students, Lhasas are also sensitive and stubborn—a difficult combination!

They can sometimes be described as manipulative, but that’s not an entirely fair label for this doggo. Instead, it’s better to think of the Lhasa Apso as a confident pup with a mind of their own. They don’t want to manipulate their trainers; rather, they want to prove to you just how clever and independent they are. After all, they spent thousands of years excelling at their job with minimal training; they may not understand why you don’t trust them to know what’s best!

The secret is to find a way to show the strong-willed Lhasa Apso that training can be enjoyable. Here are a few simple tricks:

We won’t sugarcoat it: training a Lhasa Apso and keeping up with their obedience skills is a challenge. But, a dog with low patience and a healthy dose of self-assurance needs training. In particular, you’ll want to make sure that your Lhasa has good recall so that you can more easily remove them from situations that could escalate into aggression. It’s also important to curb this dog’s excited jumping and frustrated nipping habits.

With the right method, you can develop a great training relationship with this dog. Some Lhasa Apsos have even shown promise in agility training and other cooperative activities that require extensive training.

A well-exercised dog is a well-behaved dog, and this is even more true for the Lhasa Apso. Many potential Owners expect this small doggy to be a relaxed lapdog, but the truth is, they have a lot of energy.

Luckily, with those short legs, exercising this dog isn’t as involved as some larger breed dogs. With a brisk walk and some one-on-one playtime, your Lhasa will be content at the end of the day. Overall, they should be getting about thirty minutes to an hour of exercise per day.

If you’re looking to build a Lhasa Apso’s athleticism, this small dog will happily meet the challenge. They’ll excel on dog-friendly hiking trails or obstacle courses made for small dogs.

In terms of living conditions, these dogs are compact enough to be comfortable in apartments. If you live in a home or apartment complex with stairs, make sure to take the time to teach your Lhasa how to climb them safely. And as these pups get older, consider adding in a few senior-friendly elements, such as ramps or shorter furniture to lower the risk of accidents or discomfort.

As far as climate goes, these pups can adapt to most temperatures. They can stay warm in snowy landscapes and keep themselves cool in hot ones. Just make sure they always have access to water, and familiarise yourself with the signs of heat stroke in dogs.

​Lhasa Apsos have beautiful coats of straight, long hair. Underneath, they also have a layer of undercoat that keeps them warm in the wintertime and cool in the summer. Even with that underlayer of fur, Lhasas are still hypoallergenic, and Owners don’t have to worry about much shedding.

So, how do you keep those long locs looking gorgeous? Unfortunately, with a lot of grooming.

No matter the coat length, Lhasa Apsos need daily brushing and combing to remove tangles and prevent matting. Their coat is thick, so it’s important to get to the underlayer of hair where most of the matting develops unnoticed.

Keeping their face clean is another daily task, as these dogs can experience staining around the eyes and nose. When left untreated, the buildup of moisture can attract bacteria and yeast, which will turn the affected area reddish brown and give off an unpleasant smell. To prevent it, you can do a quick face cleaning, which will involve a warm wet cloth or dog-friendly wipe and a blowdryer or dry towel. Trimming the fur around the face is another good way to lower the risk of face staining.

Speaking of trimming, these doggos need regular trips to the groomers. Whether you keep the fur long or short is completely up to you, but without regular haircuts, that fur will just keep growing until your pup is tripping over it. Lhasa Apsos require bathing about once or twice per month, as well.

Lhasa Apsos tend to enjoy long lifespans, but they do come with some health concerns:

As with all long-haired doggos, it can also be difficult to monitor a Lhasa Apso’s unhealthy weight gain. Be sure that this energetic little pup gets plenty of exercise and that they’re on a high-protein dog meal plan that won’t lead to excessive weight gain.

Fun Fact about the Lhasa Apso ♥

The Lhasa Apso’s incredible hearing earned their role as watch dogs in ancient Buddhist temples. Nowadays, that same skill has landed them in another vocation, with Lhasas taking on the role of hearing assistance dogs!

With a gentle nudge or other signal, the trained Lhasa Apso will alert their hearing-impaired or deaf Owner of important sounds, from emergency alarms, to doorbells, to the telephone ringing.

Final Thoughts on the Lhasa Apso

Lhasas have a reputation for being a difficult little doggo. Even so, they’re one of the most popular breeds around! When you get to know this quirky pup, the reason for the contradiction is clear. Because while there are some challenges to owning a Lhasa, there are even more personality traits to fall in love with.

These doggos are confident, smart, loyal, and certainly quirky. Even with a short fuse, a bit of stubbornness, and a whole lot of grooming needs, it’s easy to see the appeal of this dog: the Lhasa Apso is simply bursting with personality!

How Do I Stop My Puppy from Stealing Socks?