As regal as they are distinctive, the Shih Tzu is one unique dog. In this Dog Breed Corner, learn all about this special pooch, from their history to their quirks. Do you have a Shih Tzu who requires some expert care? Mad Paws have quality Pet Sitters in Melbourne, Adelaide, Darwin, and all over the country! 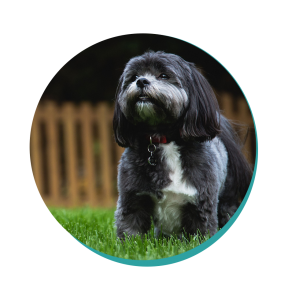 It’s amazing to consider all of the history packed into such a little dog. Yet, when it comes to ancient breeds, there are bound to be plenty of tall tales and legends to share.

The first thing to know about the Shih Tzu is that this is an old dog. Previously, experts speculated that the dog originated in China as far back as 2,000 years ago because they popped up on ancient tapestries and other art pieces. But DNA evidence suggests that the Shih Tzu could be older than 10,000 years old. These newer findings place the Shih Tzu in with the original Tibetan dogs.

It’s hard to say for sure why the Shih Tzu came about, but many believe that the breed was developed by Tibetan lamas, or Dharma teachers of the Tibetan Buddhist faith. Because lions were so prevalent in Buddhist imagery, they wanted to create a lion-like dog that they could serve as a religious symbol. Later on, they would give these dogs as gifts to Chinese emperors and other influential rulers, which spread the breed to the rest of the East.

Now, if African lions are the first animals to come to mind when you hear lion, you might wonder if the Shih Tzu really lives up to the name. However, take a look at ancient Buddhist art and you’ll immediately see the resemblance. The long hair, the bright round eyes, the flat nose and wide grin are all features that you can see in traditional Chinese guardian lions, called shishi.

But what did these little lion dogs do? Well, they lived in the lap of luxury! That’s right. The sole purpose of these compact doggos was to provide companionship to the wealthiest and most powerful rulers in the East. Breeders selected the most beautiful, soft, and gentle pups of the litter to carry on the line, and these lucky pups would serve as lap warmers and companion animals to royalty. In fact, during much of their history, these dogs were tucked safely away in palaces and temples, never to be seen by outsiders.

It wasn’t until the turn of the twentieth century that the Shih Tzu made its way outside of Tibet and China. As China opened up to outside interaction, these dogs made their way to Europe and then the United States, where they were officially added to kennel clubs.

But that wasn’t the end of the story for our floofy dog breed. Because as imperialism in China crumbled to make way for the Communist Revolution, the dog all but went extinct. It wasn’t so much the rise of communism that threatened the breed but rather the death of the breed’s biggest champion, the Dowager Empress Tzu Hsi. In addition to being known as the “dragon lady” and “good friend and terrible enemy,” she had been the one to formalise the breeding programs in China. When she died in 1908, the Shih Tzu became a rare breed.

It took many years to recuperate the Shih Tzu, but it’s now one of the most popular dogs in the world.

If you’re looking for the perfect lap dog, the Shih Tzu is your breed. They are friendly and mild, with a regal air that you can only get from centuries of living alongside royal families. They tend to get along well with other dogs and new people, and while they will act like a guard dog with strangers, they’re not aggressive.

This is an intelligent doggo, which if you’ve read any of our other Dog Breed Corners means there might be some stubbornness to deal with. It’s not so much that the Shih Tzu is rebellious but rather they may need some convincing when it comes to potty training and learning basic commands.

Make sure that your Shih Tzu has the chance to socialise with other dogs and strangers and you’ll get a pup that loves company. Because of their friendly nature, they can adapt to large households with two- and four-legged friends running around. The Shih Tzu is often the one at the dog park inviting much larger pups to play, and don’t be surprised if your Shih Tzu jumps into the laps of strangers without a second thought. They’re simply wired to be trusting and open with everyone. It’s one of their best personality traits, and it’s one of the reasons why they’re one of our trusted Pet Sitter’s favourite breeds.

Many describe the Shih Tzu as the happiest doggo on earth. They’re always keen to join in when their beloved Owners are playing, and they’ll never say no to walk. And if you’re planning a night in watching movies or reading a book, they’ll happily snuggle in and keep you company.

The Shih Tzu isn’t one of the most vocal of the toy breeds, other than to alert you to approaching strangers or guests. Other than their basic guard dog duties, this is a breed that is usually pretty quiet. And if you do happen to adopt one of the more vocal of these doggos, you can manage it with proper exercise and training.

Alright, we’ve reached the bad news. Shih Tzu dogs are notoriously difficult to train. They simply don’t rank very high when it comes to training intelligence. What we mean by that is that there are some breeds, like the German Shepherd, who excel at learning new commands. Indeed, they were bred to learn. But others, like the Shih Tzu, take much more time to learn new tricks, and they tend to have a mind of their own.

Unfortunately, many Owners take that as a sign that training a Shih Tzu is impossible. Not at all! In fact, in order to prevent your flufball from developing small dog syndrome, you should absolutely make training a regular exercise, just like daily walks and cuddles and meal times.

The key is going to be consistency. Your Shih Tzu may take longer to learn basic commands, but the more that you pester them into learning new tricks, the faster they’ll come around. This means daily training sessions or, better yet, multiple short training sessions throughout the day.

One thing to keep in mind is that although training a Shih Tzu can feel like a slog for an Owner, the doggo will love the attention. Your silky-haired floofball will look forward to your daily training sessions, even if they take longer to master the commands. So, even if you don’t reach your goal for the day, remember that you’re still providing them with valuable mental stimulation. What’s more, they’ll enjoy the bonding time with their favourite human. They’re trying their best, and they’ll learn at their own pace.

The Shih Tzu may have developed as a lap dog, but they’ve got surprisingly high exercise needs. They need at least 30 minutes of exercise daily, plus daily mental stimulation and quality doggie friend time.

For a Shih Tzu to be happy, then, you should schedule one or two walks per day; some time at the dog park; and plenty of at-home toys to hold their attention. The Shih Tzu isn’t an overly destructive doggo, but they do love a good chew toy.

Shih Tzu are social and people-oriented, which means the less alone time the better. If you’re out for long stretches, you should schedule a friendly Dog Walker to take your pooch for a stroll.

In terms of living conditions, Shih Tzu tend to adapt to a variety of settings. From small apartments to large spaces, they’ll be comfortable anywhere. And if you have other animals or people coming in and out of the house, they’ll be content.

Because Shih Tzu may take a bit longer to house train than some other breeds, some Owners have found it helpful to try crate training early on. As we mentioned in our crate training article, a safe space while you’re away can lower your dog’s anxiety. This, in turn, can prevent potty accidents.

In particular, you need to wipe their face and check their ears every day. Without daily face washing, your Shih Tzu will develop tear stains which carry smelly bacteria and can affect their sight. Many Owners opt to keep the hair around the face short or pin it back for that adorable hairstyle. Either way, the purpose is to keep the face clean and the vision clear.

You should brush your Shih Tzu’s coat about once every two or three days. This will prevent tangling and matting, especially if you keep their coat long. You can trim their fur as you see fit, and there are multiple hairstyles to choose from. Some are better suited to warmer climates, which is something to keep in mind as the Shih Tzu doesn’t have the best temperature regulation.

When it comes to bathing, once every three weeks is standard. This is a good opportunity to clip their nails as well.

This is a pretty healthy breed, although there is a peppering of the common canine issues to look out for. Hip dysplasia and patellar luxation, as well as some eye issues like progressive retinal atrophy and corneal dryness can pop up in breeding lines that haven’t been properly screened.

This is a breed with a short snout, which can give them trouble with temperature regulation, normal breathing, and swimming. In short, ensure they’re never exposed to excessive heat; keep an eye on them around water; and don’t let them stray on their own at the dog park.

Another thing to keep in mind is that obesity can creep up on your pooch if they have long coats. Keep their nutrition regulated and don’t skip their daily exercise.

And then there’s that tricky “Tzu” to figure out. Some people rely on a clearly pronounced “z” as in “zoo” but it’s actually a bit more subtle. Think “su” as in “soup” and you’ve got it perfectly!

Plus, there’s one more thing. “Shih Tzus” is not accurate. The correct plural form of more than one Shih Tzu is Shih Tzu. As in, “Look at that large family of Shih Tzu! There must be ten of those adorable little doggos!”

Okay, it might not seem like a fun fact if you’ve had Shih Tzu for years and you’ve been saying it wrong. But these are common mistakes, and your loveable pups won’t hold your errors against you!

Is the Shih Tzu Right for You?

This is a dog with a rich, royal history; gentle and friendly demeanour; and one of the most unique coats you can have on a dog. They’ve been bred to be the ultimate lap dog, and they gladly live up to their title.

Of course, that doesn’t mean that the Shih Tzu is a dog without needs. You’ll need to exercise your pooch regularly, and you might need to put in more effort on the training front. In addition, they require regular grooming such as face cleaning, brushing, and trimming.

If you’re willing to meet your daily tasks, you’ll be rewarded with the most regal companion you could ask for!

Can My Dog Eat Pistachios?

Eye Protection For Your Dog