Chances are, you’ve seen these cute little guys in a viral video and thought: “What is that cat and how can I get one?” The Minuet Cat is the star of this Cat Breed Corner! 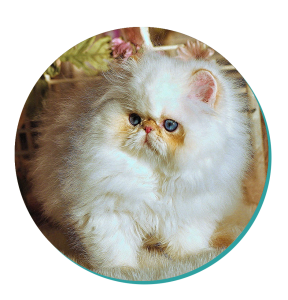 Other names – also goes by “Napoleon Cat”, and is sometimes mistaken for the Munchkin Cat

The Minuet Cat is a very recent breed, having only been developed in 1996. But although the founder, Joe Smith, was interested in creating a short-legged breed by crossing Persians with Munchkin Cats, he quickly realised that genetics weren’t quite on his side. The short-legged gene is recessive in cats, meaning that the likelihood of all Minuet kittens in a litter having short legs is very small.

However, Smith still wanted to move forward with his breed. As such, he considered other factors like face structure to make his cats stand out. The result was a sweet-looking furball with wide, round eyes and an adorable button nose that is a bit more prominent than the Persian.

Minuets come in a standard short-legged version and a non-standard long-legged version. A single litter is likely to have a combination of both.

It’s quite amazing that Smith was able to breed a cat with a personality to match their appearance so exactly. The Minuet is a sweet, loving, easy-going cat. They are outgoing and social, so be ready to give the Minuet plenty of love and attention. In fact, the moment you return home, the Minuet will be at your feet, ready to follow you.

Because of their affinity for attention, the Minuet is a trainable cat. The key is to start when they’re very young and give them lots of love throughout the process. Minuets are so confident and relaxed, you can even train them to walk outside on a lead. Don’t let those short legs fool you – these cats are just as ready to play and exercise as any of their long-legged relatives.

Much like other sociable kitties, the Minuet doesn’t do well on their own for long stretches of time. If you’re going to be away for more than several hours, play it safe and book a Cat Sitter.

It’s reasonable that potential Minuet owners might worry about the health of their cats. Persians, after all, suffer from quite a few problems, from blockages resulting from their short noses, to PKD, Polycystic Kidney Disease.

Fortunately, Minuets are much healthier than their parents. Their broad noses ensure that they don’t have any breathing problems, and PKD can be prevented through responsible breeding.

You might also be wondering about whether there are any health concerns when it comes to those short legs. Is there undue strain on the spine? Are their joints okay? Luckily, the Minuet is healthy on all counts.

The only thing you have to worry about is that your home is set up for a short-legged cat to prevent injuries from falls. The Minuet is a bold little cat that will definitely try to jump up on shelves and ledges.

Minuets come in a variety of coats, which will determine how much grooming you can expect. For a short-haired Minuet, a good brushing once a week is perfect. If yours has the long-haired Persian coat, be read to take on a bit more work. Minuets don’t generally have as thick of a coat as the Persian, but you may still need to brush them a few times a week.

Minuets were originally called Napoleon cats as a play on their short stature. Interestingly enough, Napoleon would not have appreciated the attribution, not only because of the joke about his height, but because he hated cats.

How Much Do You Need to Walk Your Dog?

Why Do Cats Purr?