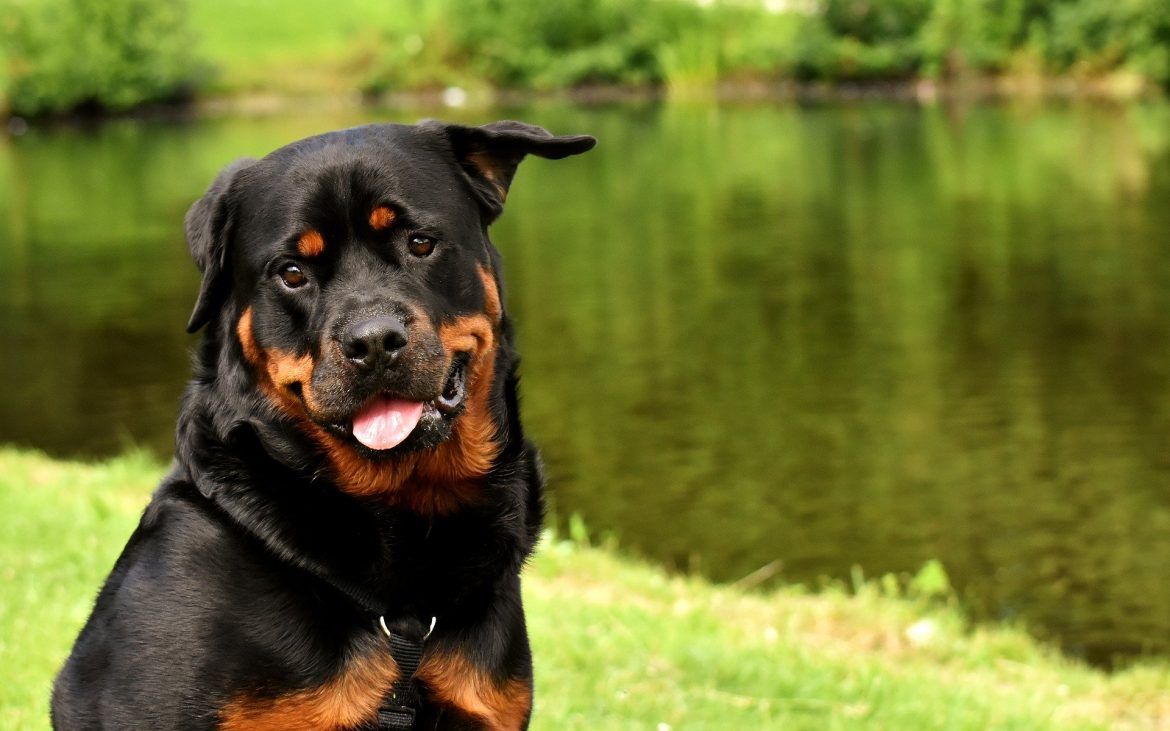 Thanks to a few news stories and pop culture cliches, this dog breed carries a reputation as a fearsome guard dog. Speak to any Rottweiler Owner, though, and they’ll tell you about the breed’s warm hearts and winning smiles. Join us as we learn all about the history, traits, and quirks of this often misunderstood breed! Do you have a Rottweiler who needs a carer as sweet as they are? With Mad Paws, you can find Rottie-friendly Pet Sitters in Sydney, Darwin, Adelaide, and everywhere in between. And to ensure they get all the protein they need, sign them up for a Mad Paws Dinner Bowl dog meal plan! 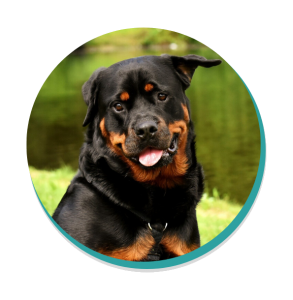 These days, the mere mention of a Rottweiler conjures images of a loyal protector. However, the breed began their history not as a guardian of humans, but a drover of cattle. While the breed hails from Germany, they’ve descended from the Molossus – a dog the Romans used to drive cattle. When the Roman Expire reached into Germany, they brought their cattle, as well as the Molossus dogs who drove them. With the passage of centuries, the Roman Molossus evolved into the German Rottie we know and love today.

In their German home, the Rottie became a mainstay of the cattle scene. Beyond driving livestock, they also began to pull butchers’ carts – a task which graced them with strong, stocky physiques. Even back then, Owners recognised the Rottweiler’s potential to protect; after selling their cattle at market, they would keep their winnings in a pouch around their Rotties’ neck. All of a sudden, post-market theft became a thing of the past.

Once the railway transformed cattle transport, the Rottweiler fell out of favour as a breed. At the turn of the 20th century, though, a group of dog lovers brought them back from the brink. Writing a standard for the breed, they championed the Rottie in Germany, where the breed once again grew in popularity. By the 1930s, Rotties had made their way to the U.S, from where they spread across the globe.

Ever had a friend who was slow to accept you, but unshakeably loyal once they got to know you? That’s the Rottweiler in a nutshell. The Rottweiler isn’t the type of pup who will make a big fuss over every new stranger they meet. However, if they count you amongst their family, you’ll be hard pressed to find a more committed friend.

Rottweilers can be great family pets, and will love the children and pets they’ve grown up with. Do remember, though, that Rotties are still herders at heart. As a result, they can sometimes accidentally knock toddlers over in their excitement. With this in mind, always monitor your Rottie around small children – even if they’re your own. It also pays to remember that Rotties can often behave aggressively towards strange doggos, so always introduce them the right way.

Through a mixture of their sturdy physiques and primal urge to protect, Rottweilers have evolved into natural guard dogs. If you’d like to feel a bit safer or just want to deter a nosy neighbour, this might sound ideal. However, should you fail to fully socialise your Rottie, their protective instincts will become a major problem.

To put it another way,  a well-socialised Rottweiler can be like Wolverine from the X-Men: loyal to those he loves, slow to warm to strangers, and fierce towards anyone who threatens his friends. By contrast, a poorly socialised Rottie can be like the Hulk: a danger to friends and foes alike.

For this reason, it’s crucial that you socialise your dog early by introducing them to new people, places, and experiences. Doing so can make the difference between a vicious dog and a calm, affectionate companion who still has your back.

While these warnings may sound dire, Rottie Owners will be quick to tell you that they’re worth it. When socialised, these dogs will embody the “gentle giant” motif – keeping quiet but calm around strangers, and showering their humans with love. They’re also sharp as whips, so they’ll respond well to training. With that said, their keen minds can sometimes lead them to test your boundaries. To counter this, you may need to assume a strict tone at times – but as with all dogs, you should never resort to corporal punishment. Simply maintain firm but fair leadership, and your Rottweiler will leap at the chance to follow.

​Speaking of “leaping”, Rotties fall somewhere in the middle of the exercise spectrum. On one hand, you won’t need to commit an hour a day to walking them, as you might with Border Collies. However, a British Bulldog they are not, and a five-minute stroll won’t satisfy them. Instead, aim to give them two 20-minute walks a day, and intersperse these with at-home games like tug-of-war.

While their exercise needs don’t meet those of some other big dogs, Rotties are still not suited to apartment living. Likewise, they’ll be likely to bark, howl, and dig if you leave them in the backyard all day. These dogs are obsessed with their humans, meaning they’ll be happiest when they’re with their Owners. Should you need to leave them alone for long stretches during the day, you may wish to consider Doggy Day Care.

Because of their double coats, Rotties’ fur will shed heavily twice a year: during autumn and spring. For the rest of the year, they’re only likely to leave a trickle of hair around your home.

Lastly, you may already suspect this, but Rottweilers have hefty appetites. To combat overeating, ensure you only feed measured portions to your fully-grown Rottie.

Luckily, this breed’s robust personality translates to their health profile. Even so, as with all dog breeds, they run the risk of suffering from certain conditions. Chief among these are:

The best way to minimise these issues is to avoid backyard breeders, who often maintain poor breeding standards.

Why is My Dog Afraid of Vacuum Cleaners?

Very valuable information, it is not at all blogs that we find this, congratulations I was looking for something like that and found it here.