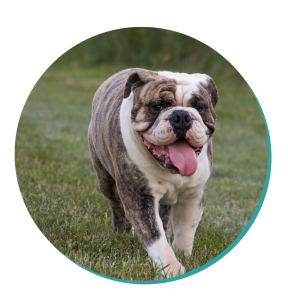 If you’ve ever watched a video of a British Bulldog on Facebook, you might not believe their bloody past. Their gentle demeanours, fondness for naps, and inability to master stairs don’t suggest they’re descended from ruthless killing machines. However, the first British Bulldogs share little in common with the stubborn but tender wrinkle floofs we know today.

Believed to have descended from Roman Mastiffs, the British Bulldog was once a much larger, taller, and more violent canine. From as early as the 16th century, the Bulldog was used chiefly for the blood sport of bullbaiting. In an age when most people couldn’t read, play music, or afford theatre tickets, vicious dog-vs-bull fights were popular with the masses.

The Bulldog’s flat nose, underbite, and muscle mass let them latch onto the noses of their bovine prey. Likewise, their low slung bodies allowed them to evade the horns of the bulls during their forced fights. The British government banned bullbaiting in 1835 – and at the time, dog lovers assumed the Bulldog breed would slowly vanish. However, as many people admired the Bulldog’s strength and courage, a handful of dog lovers convened to rehabilitate the breed. By breeding the most gentle Bulldogs, they created a canine that evolved into one of the most family-friendly dogs around.

Did we mention that they’re one of the most family-friendly dogs around? Well, yeah, I guess we did…but it bears repeating. They might sport the face of a cranky old man, but beneath their stout shell you’ll find a heart of gold. They adapt well to children and strangers alike, and will make human friends wherever they waddle. They’re also ideal for the Owner who doesn’t have much time to walk their pooch. Thanks to their lethargic nature, they’ll be happy with a short stroll around the park. In fact, unlike more energetic breeds, you’ll often need to convince them to exercise!

Of course, if you’re looking for a dog who’ll play fetch with you, we suggest you keep searching. British Bulldogs aren’t the fastest learners, and will often look down their short noses at high-octane games.  They can also be distrustful of more energetic dogs, and don’t always play well in packs. Finally, their love of a good snack can lead to weight gain if you don’t monitor their eating.

If you want a companion for your next Netflix binge, the British Bulldog is the pooch for you!

You may have deduced this by now, but the British Bulldog perfectly fits the bill of “Apartment Dog”. They’re custom-built to be indoor pups, and can struggle if they spend the day outside in the yard. They’re also very vulnerable to overheating, so ensure they drink plenty of water during their walks. If you don’t have one, you should invest in an A/C unit before you bring home a Bulldog. However, don’t let them cool off by taking a dip in the river or pool. Their massive head is much like a bowling ball strapped to their shoulders, and will cause them to sink.

On the flipside, they also don’t respond well to extreme cold. Keep them rugged up in the winter months and they’ll be happy.

From a health perspective, the British Bulldog can struggle with breeding problems. While loud snoring is common, be sure to take them to the vet if they’re wheezing excessively during waking hours.

Do you like dog drool? Then you’ll looooooove the British Bulldog. This pup is a celebrated drooler, and will leave puddles of saliva wherever they roam. You’ll also need to wipe under their loose folds of skin every few days to avoid a buildup of bacteria. The good news? The Bulldog doesn’t shed much!

Winston Churchill, the U.K. Prime Minister during World War II, was often referred to as “the British Bulldog”. Some say this was due to his courage, but if you glance at his image, you might see a resemblance.

Create Your Own Mad Paws Business Cards and Flyers

Good article, Thomas! The wrinkles on their snout were for diverting the bulls blood away from the dogs eyes whilst they hung on to the bullls snout and suffocated them. The out of proportion, light rear end was developed so that there was not so much mass behind the head, making it harder for the bull to utilise G force to dislodge the dog by swinging it side to side during the fight. Unfortunately, the big head and small rear end combined, mean that they have to be delivered by C Section births, contributing to the cost of purchase. Still, all in all, one of my favourite dogs. Maybe a post on the Aussie Bulldog is worth considering. They actually bear more of a resemblance to the original breed and are capable of normal births.