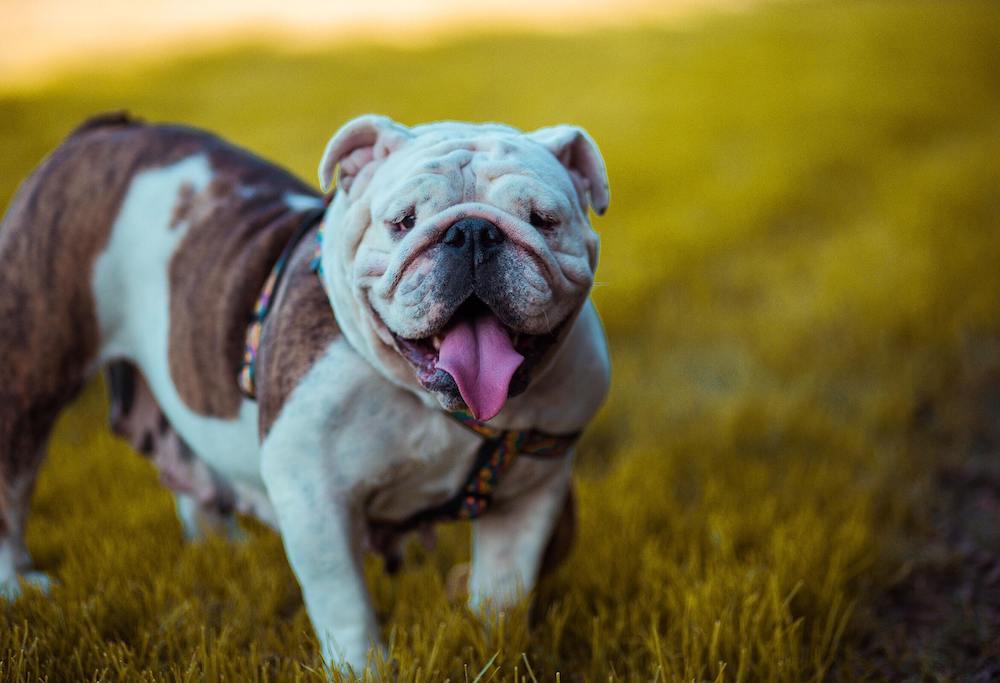 The Australian Bulldog is more than just a new take on an old breed. Indeed, this dog has the energy and stature to stand up to Australia’s challenging landscapes. What’s more, they have all the family-friendly personality that you would expect from the Bulldog family. For Aussie Bulldog-friendly quality pet meals or Pet Sitting in Perth, Sydney, and all over Oz, Mad Paws has got your back! 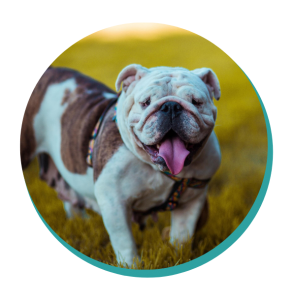 If someone were to lay out pictures of British Bulldogs and Australian Bulldogs in front of you, you might not be able to differentiate one breed from the other. Yet, line up the doggos side-by-side, and the difference becomes clear. While they have that quintessential Bulldog look, Aussie Bulldogs are larger, heavier, and slightly more mastiff-like than their British counterparts.

So, how exactly did this offshoot come about and why?

Let’s go back to the mid-90s, when Bulldog enthusiasts Noel and Tina Green began to create a new breed of wrinkly pup. At first, there weren’t any plans or goals behind this. Rather, their work stemmed from an open curiosity about (and affection for) the breed.

Eventually, the Greens realised that, with careful breeding, they could create a Bulldog that was better-suited to the Australian climate. To deal with potentially extreme temperatures and diverse geographical landscapes, the perfect Aussie dog needed a few special characteristics. You’ll notice with the Aussie Bulldog, then, some unique tweaks:

Basically, the Greens created a dog that is the spitting image of the British Bulldog, if that Bulldog’s features were in proportion to the rest of their body. They achieved this with some help from larger Bulldog-type dogs, such as Mastiffs, Boxers, and English Staffordshire Bull Terriers.

At the start, the Greens weren’t seeking a path for fame or breed standardisation for their little Aussie dogs. However, as others became interested in the breed—and some breeders began trying imitating the look—the Greens did take a more official approach to their breeding program. Part of that process was to organise an official society, originally called the Australian Bulldog Society. From here, they pursued a quest for recognition from the Australian National Kennel Council.

Since then, the breed’s name has been officially changed to the Australasian Bosdog. Even so, most still know this pup as the Aussie Bulldog.

While English Bulldogs may be known as a family dog with a dash of stubbornness and bravery, the Aussie version is all cuddles and friendliness. And that’s by design. The Australian Bulldog was specifically intended to be a happy-go-lucky, relaxed family dog that would get along well with others. Their energy and enthusiasm makes them the perfect companion for whatever your family has planned.

Aussie Bulldogs stick with their favourite humans, and their loyalty is unwavering. If you’re looking for a good watchdog, this Bulldog is quite alert, and will let you know if they detect something out of the ordinary. We wouldn’t say that they’re overly territorial, but they will sound the alarm to keep their beloved family safe.

Because these dogs are so people-oriented, training is very manageable. That said, it may take some time. Like their British predecessors, the Aussie Bulldog can be slow to learn. This is not because they’re resistant to the training, but rather because they need the right kind of patience and encouragement to keep them engaged.

When training an Aussie Bulldog, we suggest you learn what really makes their tail wag. Do they prefer being outside in the backyard? Are they after a certain kind of treat or toy? Whatever makes them the happiest, you can use that to get them excited about your training sessions.

And as far as the actual training methods go, you can’t beat positive reinforcement training for Australian Bulldogs. Why? Because while this dog has a distinct personality from their English brethren, you can still find traces of hardheadedness in them. If you take an approach that is overly harsh, they may plop down on those beefy haunches and refuse to proceed with the training session.

If this does happen and your pupper seems to be overwhelmed, simply cut the session short and try again later. With frequent, short training sessions, Australian Bulldogs will learn much faster than in one packed crash course.

One more thing we should mention about training is socialisation. This is the process by which you expose your young pup to other dogs, animals, and people. By doing so, they can learn how to be confident and friendly around others. Aussie Bulldogs are naturally inclined to be social butterflies, but it’s still important to introduce them to the playmates and strangers early. This way, that they won’t take on some of the curmudgeonly qualities that you might see in a British Bulldog.

​The Aussie Bulldog may not be able to keep up with your Border Collies or Vizslas, but don’t underestimate this dog’s pep. Whether they’re frolicking around the dog park with friends or acting as your faithful walking companion, this dog won’t tire out as quickly as other types of Bulldogs. You can even coax them into slightly more strenuous activities, like hiking or water play, as long as they get to spend time with their beloved Owners!

Of course, while these dogs are more active than traditional Bulldogs, don’t expect them to take up jogging or other high intensity athletics. After all, they were bred to be more well-adapted to the Australian terrain, but they’re no working dogs.

One thing to remember with Australian Bulldogs is that while they may not be keen to expel their energy through games of fetch, they do still need daily play and mental stimulation. Otherwise, they can pick up some destructive habits like chewing. If you can’t provide them with daily walkies or other exercise, you might want to call in a friendly Dog Walker to keep them happy and calm.

As far as living conditions go, this is a highly adaptable doggo. They’ll be happy in both small apartments and larger open settings. But there are a few caveats.

One, these dogs are less sensitive to heat than other Bulldogs because of their roomier respiratory system. But, that doesn’t mean that they should be left outside for long periods of time. Always make sure that this doggo is able to get inside when it’s hot out and that they have access to fresh water to help them regulate their body temperature.

Two, no matter the dog-friendly environment that you’re able to set up for your pup, the one thing that an Australian Bulldog really wants is companionship. These puppers don’t like to be left alone and will show signs of distress and boredom. Long bouts of barking are a strong indication that this dog is lonely—content Aussie Bulldogs tend to be on the quieter side unless they’re doing their watchdog duties.

​Don’t let that short coat fool you: the Australian Bulldog is not a dog without its grooming needs.

Put simply, the Aussie Bulldog is a moderately shedding pooch. As such, it’s a good idea to have a soft-bristled brush on hand to keep up with the shedding fur. Don’t worry about being too strict with your brushing schedule—about once per week is plenty. In fact, we recommend stashing a grooming brush alongside your couch. That way, you can work in a quick session while watching a movie or lounging around.

Where grooming will require more attention is with bathing and caring for the ears and wrinkles. Australian Bulldogs can be prone to skin conditions, and moisture trapped in their wrinkles can lead to infection and irritation.

Luckily, Aussie Bulldogs tend to have fewer wrinkles than English Bulldogs. Still, it’s a good idea to take a clean towel or dog-friendly wipe to their face, neck, and ears every few days. Most importantly, make sure that these areas are dry as a bone to prevent bacteria growth.

It can be a bit tricky to find the perfect bathing schedule for an Australian Bulldog. Some Owners opt for once per week, while others wouldn’t want to bathe their pup more than once every six weeks. It may take some time for you to find the ideal routine for your dog’s sensitive skin; if they struggle with skin irritation, you’ll want to talk to your vet for advice.

In recent years, the global dog community has become much more aware of the unique health issues faced by English, American, and French Bulldogs. That’s why health has been a major consideration in the breeding of Australian Bulldogs. This goal hasn’t so much existed for the convenience of the Dog Owner, but for the wellbeing of the doggo.

One health consideration that we’ve already discussed is the phasing out of the brachycephalic features. In a nutshell, breeders have elongated the snout, thereby adding more spaciousness in the neck and shoulders. As a result, this dog can breathe, eat, drink, and regulate body temperature better than most brachy breeds. That’s not to say that the respiratory issues are completely gone—some Aussie Bulldogs still sport a short snout. However, they’re less common than in other Bulldog breeds.

Other genetic issues may take longer to phase out of this breed than the ones related to their snout size. Potential Aussie Bulldog Owners should be on the lookout for the following:

Obesity can creep up in Australian Bulldogs, so these pups need a healthy diet and exercise regimen. And, while Aussie Bulldogs breeders are encouraged to produce non-white coat colours to prevent skin cancer, there are some white Aussie Bulldogs out there. If you have one, take special precautions against sun exposure.

Australian Bulldog, or Australasian Bosdog? What is the deal with that name change?

As it turns out, there are a few hoops to clear these days to create a whole new dog breed. One of them is landing on a proper name. According to the Australian National Kennel Council, all recognised new breeds can’t use the same names as existing breeds. Sorry, Australian Bulldog but Australian Shepherds, Australian Kelpies, and the many different Bulldogs already beat you to it.

So, the Australian Bulldog Society took a different approach. The Australian was changed to Australasian, and the Bulldog was shrewdly switched to Bosdog, stemming from the Latin word for cow.

Changing a dog’s accepted name is tough. However, the Australasian Bosdog Society has a ten year plan to make it work. In the meantime, you’re welcome to use whichever name you choose.

Final Thoughts on the Australian Bulldog

Many people are drawn to this breed because of its relation to the British Bulldog. Even so, this pupper has their own unique qualities that will make you fall in love. A friendly disposition, adaptability, good health, and penchant for adventure, the Aussie Bulldog is uniquely designed for the Australian lifestyle.

Thanks to their mixed background and careful breeding, the Australian Bulldog is a healthy pupper with few medical concerns. That said, special care should be taken to limit excessive heat, and Owners should be wary of obesity.

If you’re looking for an even-keeled, laid-back, family-friendly companion, this is the doggo for you. As long as you can commit to a few regular grooming tasks, a bit of a longer training process, and plenty of quality time with your Australian Bulldog, you’ll enjoy a steadfast companion who is sure to brighten your day.

How Much Sleep Do Dogs Need?

How Do I Train My Dog to Shake Hands?