Also known as the Mexican Hairless Dog, the Xoloitzcuintli (pronounced “Show-low-eatz-QUEENt-lee”) is as striking as they are rare. In this Dog Breed Corner, we explore the background, quirks, and personality of the Aztec pooch of the deities. If you need a Dog Minder nearby who has the down-low on your Xolo, look no further than Mad Paws! 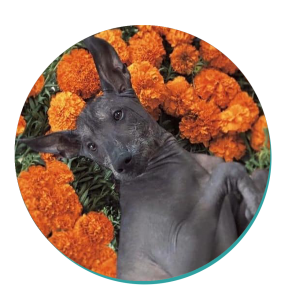 If you prefer dogs who look like they belong in a pet food ad, the Xoloitzcuintli’s appearance may startle you. After all, thanks to their hairless coat, Sphynx-like ears, and sometime mohawk hairstyle, they somtimes come off resembling an alien. However, for much of their history, its been these unique features that have garnered favour for the breed. And at over 3,000 years old, the Xoloitzcuintli dog breed has a LOT of history to share.

Archeologists conclude that the Xolo’s forebears reached Central America by migrating from Asia across the now-drowned Bering land bridge. As the canine comrades of pre-Aztec humans, these early dogs would pre-date many civilisations. When the Aztec Empire began to flourish, so did the breed we now know as the Xoloitzcuintli. In fact, the name ” Xoloitzcuintli” draws inspiration from Xolotl, the Aztec fire god and shepherd of the deceased. During this era, Aztecs believes them to possess healing properties; act as wards against wicked spirits; and lead the deceased into the afterlife. Because of this, the image of the Xolo came to play a role in modern Mexico’s Day of the Dead.

While the breed enjoyed acclaim well into the 19th century, the Mexican Hairless Dog eventually suffered a decline in demand. After earning recognition from the American Kennel Club in 1887, the Xolo’s popularity waned over the next several decades. In 1959, the AKC revoked its registration of the breed, and were it not for avid breeders, the Xolo may not have survived until today. Thanks to the efforts of these breeders, though, the Xoloitzcuintli made it into the 21st century. Now, thanks to a resurgence in attention, the Xolo enjoys a rep as a Mexican treasure. Indeed, in 2010, the nation voted the Xolo their Dog of the Year.

In response to the breed’s Renaissance, the AKC reregistered the Mexican Hairless Dog in 2011. Now, around 30,000 Xolos grace households the world over.

Have you ever known someone who is slow to warm to new people, but unshakeably loyal to their friends? If so, you’ll have no problem understanding the Xolo. At times wary around strangers, the Xoloitzcuintli will stand by their Owners ’til their last breath. As a result of their family-friendly nature, Xolos prefer to be around their people as much as possible. If you’d like a pooch you can leave alone every day, the Xoloitzcuintli may not be the breed for you. However, if you work from home, or have a dog-friendly workplace, the Xolo will make a brilliant companion.

As with any breed, you’ll need to socialise your Mexican Hairless Dog from a young age. However, due to their guarded nature and protective instincts, socialisation is especially crucial for Xolos. On the upside, these same traits make them ideal watchdogs, who will warn you of any danger to your home.

Although the Mexican Hairless Dog is, well, hairless, it does also come in furry variety. If you’re bringing home a Xolo in the hopes they don’t trigger your dog allergies, ensure you meet them first.

Like we said above, early-stage socialisation is key for the Mexican Hairless Dog. It’s during this stage of their lives that you can set a consistent tone of training that cements your authority. Having said that, it’s never too late to train a dog; whether your Xolo is a young puppy or an older rescue, firm but fair consistency will make all the difference. Just remember that the Xolo is an ancient breed, which means their prey drive is largely intact. Simply put, you should expect your Xoloitzcuintli to dart after cats or possums on their evening walk. Of course, by firmly but kindly correcting this habit, you’ll further establish your role as the boss.

While they do require a vigorous daily walk, they don’t boast the exercise needs of, say, a Husky. Once they’ve received their daily stroll, they’ll be happy to spend the day cuddling with their Owner. Even so, puppy Xolos can be little balls of energy, and will want to play constantly. Deprive them of their playtime, and you may well find a scattering of paw-shaped holes in your sofa.

Are you looking to bring a Mexican Hairless Dog into your home as a second pet? If so, prepare to hasten slowly. To aid in your quest, read our article on introducing a second dog to your home.

Good news, flat dwellers: all three sizes of Xoloitzcuintli can adapt to apartment living. Provided they don’t need to spend much time alone and receive their daily walks, they should be happy in most apartments.

By the same token, if you live in a house, this is not the breed to leave in your backyard; they’re agile and wily, and will conquer a backyard fence as if it were a bowl of kibble.

While the Xoloitzcuintli doesn’t suffer from any unique diseases, their lack of hair can cause problems. Firstly, they’re more susceptible than most dogs to sunburn. Before you take them outside during the daylight hours, always apply doggy sunscreen to their skin. Secondly, the cold can affect them more deeply than furry breeds. During the winter, ensure they have a jacket when they’re outside; for indoors time, keep your home warm, and give them access to blankets. However, these issues don’t plague coated Xolos to the same degree.

In regards to grooming, the Mexican Hairless Dog will require weekly washing of their feet to cleanse their sweat glands. You’ll also need to trim their nails once a week, and bathe them every 2 – 3 weeks with a canine shampo.

Fun Fact about the Xoloitzcuintli ♥

This may not surprise you, but we have a few for the Xolo.

Firstly, thanks to their hairless body and natural heat, the Xoloitzcuintli reminds many Owners of a living hot water bottle. For those cold winter days, nothing beats a snuggle with a Xolo!

Secondly, remember how we mentioned that Aztec culture viewed the Xoloitzcuintli as an escort for the dead? Well, they often took the concept literally, and buried Xolos with their deceased Owners. Needless to say, this trend has since gone out of fashion…

Thirdly, many Pixar fans may have first learned of this in the 2017 film Coco, which features a charismatic Xolo named Dante as a protagonist. Since the film’s release, Google searches for “Xoloitzcuintli” and “Mexican Hairless Dog” have skyrocketed!

Meet Cassie, Our November Pet Sitter of the Month