This Dog Breed Corner star has many names, an official state title, and lots of love for their Owners. We’re talking about the Catahoula Leopard Dog! Learn more about this pup’s background, personality, and exercise needs. Are you searching for some houla-riously great pet care? Mad Paws can connect you with the best Pet Sitters in Perth, Adelaide, Hobart, and all over Australia! 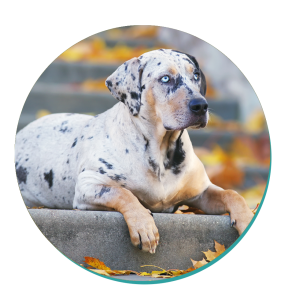 The origins of this striking American dog are more mythological than factual. But when it comes to dog breeds, we love a good story, even if the hard facts are a little fuzzy.

If you ask anyone in Louisiana about the history of the Catahoula Leopard Dog, they may say that it’s one of the only breeds with red wolf ancestry. That’s because when European colonists arrived in the American South around the 1500s, they noticed that domestic dogs, called Wolf Dogs, were living among the indigenous communities of the area. And, because red wolves were prevalent in the Southeast at the time, it wasn’t unreasonable to assume that the dogs were red wolf descendants.

They may not have been totally wrong. Red wolves, which look a bit like red-coated coyotes, probably played a part in the development of the breed. But genetic studies have suggested that most Native American dogs were more likely brought over from Asia by way of the Bering Strait, making them more closely related to the grey wolf.

No matter their true origin, one thing is for sure: the Wolf Dog was perfectly acclimated to the swampy area. And, when the Spanish colonists released boar into the wild, they needed a dog who could traverse the difficult landscape better than their own Molossers, Bloodhounds, and Spanish Greyhounds. Before long, the Catahoula Cur was taking shape as an excellent working dog, but the breed wasn’t finished yet. With the next wave of colonists, this time French, another dog breed was crossed with the Catahoula: the Bas Rouge.

By the late 1700s, the Catahoula Leopard Dog was Louisiana’s best cattle herding and boar-hunting dog. With an incredible sense of smell and the strength needed to wade through swampy thickets, they did a much better job at finding wild boar than humans. And once they found a passel of pigs (and now you know the official term for a group of wild boar!), the dogs worked by forming a canine pen around them until the hunters showed up. If you’ve ever come snout to snout with a wild boar, you’ll know that this was a dangerous task. But the Catahoula Hounds were brave enough for the job.

Wild boar have never fully left the Southeastern United States, which means that this hard-working dog has never been out of work. But, over the last few decades, they’ve taken on the role of beloved family pets, as well. And, to commemorate their contribution to the region’s history, they were named the official state dog of Louisiana in 1979. Today, you’re most likely to find these doggos in their home state, but they’ve become popular with hunters and families around the world.

With a heart the size of Louisiana, it’s no wonder these dogs have earned their place inside the home. Dedicated to their Owners and always looking out for their wellbeing, the Catahoula Leopard Dog is never far from their favourite people. In fact, dogs this devoted are sometimes prone to separation anxiety. So, if you’re going to be away from home for long periods, you’ll need to spend extra time building up their tolerance for being alone. Leaving them in the care of a friendly Dog Sitter is another good option for this people-loving pup.

As watchdogs, these puppers won’t let you down. They’re alert but not likely to patrol the property looking for a fight. And with strangers, they tend to be wary until they’ve judged a person’s trustworthiness. In the end, they’ll look to their Owners to know whether they should be polite or protective.

With children, these dogs are typically friendly and ready to play. Keep in mind that they are big puppers, so an adult should always be around to supervise and make sure no one gets knocked over by accident.

Unknown dogs, on the other hand, may not be this hound’s favourite playmate. If they’ve been socialised from an early age to like other dogs, it shouldn’t be an issue. But be aware that the Catahoula Leopard Dog can develop aggression, especially between males.

Thanks to their chasing and tracking instincts, these dogs may not be suitable around cats or other small animals. Again, it’s not impossible, especially if they’ve been socialised properly. But, extreme care should be taken when first introducing this dog to cats.

These dogs are smart and hard-working, making them great students in the right training conditions. In fact, unless you’re able to have this pupper on a working farm or in a work setting, training should be a regular practice to keep their mind properly occupied.

Here are a few ways to train the clever Catahoula Leopard Dog:

With the right approach, this dog is highly trainable. But, we wouldn’t say it’s a walk in the park. Stick with it, stay consistent, and your Catahoula Leopard Dog will become an amazing student.

As we hinted at, this dog needs the right amount of exercise to stay focused during training sessions. That’s because they’re pretty high energy pups! The average dog in this breed will require about an hour of activity per day. And, we would say, the more exercise you can fit in for this working dog, the better.

Here are a few ways to get a Catahoula Leopard Dog moving:

The Catahoula Leopard Dog may no longer be rounding up wild boar or outrunning alligators, but they do require an active lifestyle to stay happy and healthy. Make sure that they have access to a nutritious meal plan for dogs that will help them run longer, jump higher, and recover faster.

When it comes to living conditions, these dogs are best suited for homes with outdoor space. Make sure that there’s a strong fence around the perimeter because they will follow their nose right off your property.

Thanks to their watchdog tendencies, they may not enjoy living in an apartment building where constant noise will put them on high alert. That said, if they’ve been brought up in that environment and they get plenty of exercise, a roomy apartment may be appropriate.

As far as climate goes, they were bred to be comfortable in the hot and humid swamps of Louisiana. So, they’re fine in warm climates. But, with a single layer coat, they tend to get cold faster than other dogs. Outfit them with a fashionable doggy sweater and they’ll be ready to head out in cold weather.

With that short coat, grooming is a breeze with this doggo! They’re not non-shedding, but a quick brush a couple times per week will help to remove loose fur and distribute their natural oils. Stick with a soft bristled brush that won’t irritate their skin.

Catahoulas typically don’t need baths more than a few times per year, but this will depend on your dog’s lifestyle. Like we said, they love water, so you might find yourself rinsing your pup after a dip in a mud puddle.

Beyond coat care, you’ll want to check this dog’s ears for infection, especially after swimming. And be on the lookout for ticks and other pests if they’ve followed their nose into a grassy field or thick underbrush.

Nail clipping and tooth brushing can also be added to your short list of grooming needs.

These pups are generally healthy and hardy, with very few genetic conditions to worry about. Still, Catahoula Leopard Dog Owners should be aware of their dog possibly suffering from:

As is usually the case with large dogs like this, hip dysplasia and bloat can also be health risks for the Catahoula Leopard Dog. And, because of their high energy, they may also be prone to injuries. Make sure to get them covered with a reliable pet insurance plan to give you peace of mind as this bold pup bounds through life.

One of the most striking things about this dog are their eyes. Many have bright blue eyes, called glass eyes, but you can also find green and brown eyes in this pup.

This piercing eye colour is thanks to the merle gene, which is common in Australian Shepherds and Koolies. Not only does this genetic trait create the leopard-print coat colour in the Catahoula Leopard Dog, but it also makes them more likely to have heterochromia, or different coloured eyes. A Catahoula Hound with more than one colour in each eye is said to have “cracked glass” eyes.

The Catahoula Leopard Dog is not the perfect breed for every Owner. With a strong work ethic and tracking instinct, they need a lot of training, socialisation and exercise to adapt to a domestic lifestyle.

If you are able to give this dog the right structure, they’re unbelievable companions! They get along with kids, aren’t afraid to play watchdog, and will amaze you constantly with their intelligence.

Perhaps it’s those hypnotising eyes, but it’s easy to fall in love with the Catahoula Leopard Dog!